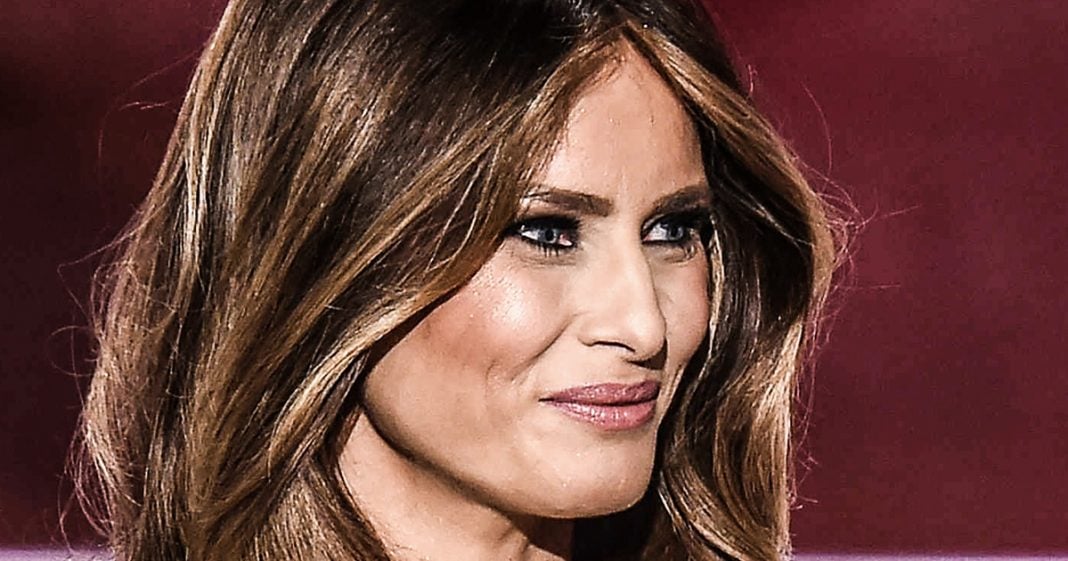 Melania Trump spent her first few weeks in the United States working illegally. Her parents were just sworn in as citizens through chain migration. These are both items that Trump has said have to go, and under the new proposed rules for immigrants that become citizens, Melania would technically be up for having her citizenship revoked. The rules, however, aren’t meant to target people that look like Trump, as Ring of Fire’s Farron Cousins explains.

Yesterday, Melania Trump, the First Lady of the United States, Melania Trump, her parents officially became U.S. citizens. They were sworn in, they are now citizens of the United States. When this story broke, who cares if they became citizens? Good for them, right? I mean, I personally, it doesn’t affect my life one way or another if they become citizens, I’m happy for them.

A lot of people immediately pointed out that the reason her parents were able to become citizens is because of chain migration. Then, and I wish I would have saved the person’s name who posted this story on Twitter in response to the Melania’s parents get citizenship story. It’s this, Donald Trump’s wife, Melania Trump, worked illegally during her first weeks in the U.S. according to official documents.

I say if somebody is qualified and they legitimately want to come to the United States and work hard and pursue what we claim to be the American dream, let them in. That is my policy. It’s not an open borders policy, we need to have smart immigration but we also don’t need to just put up a wall and say, “Nobody is allowed in. No, people should be able to come into this country if they truly want to, and if they’re not going to come over here and kill people,” which is actually very rare.

Melania Trump has done every single thing that Donald Trump claims that immigrants do in order to become citizens here in the United States. She is everything that he hates, so why did he choose to marry this woman? Well, she was a model, that’s the main reason but more importantly she’s white, she’s not a brown or black person coming into the United States because if she were, Donald Trump would be on Twitter every single day attacking her for the way that her and her family have become United States citizens because again, that’s what this whole thing is about.

It’s not actually about immigration, it’s about race. Everything with this man comes back to race because if he truly wanted to do something about immigrants coming into this country and taking advantage of our systems he would be deporting his own wife. Hell, under a new rule that his own administration is working on, Melania is technically eligible to be stripped of her citizenship and deported because of the fact that she worked illegally in the United States.

That is actually one of the criteria that Stephen Miller is helping Donald Trump work on to strip actual legal citizens of their citizenship so they can be deported. I don’t know, maybe Melania needs to watch out for what her husband and Steve Miller are actually doing. Because yes, according to their own new rules that they are drafting she would be eligible for deportation but she doesn’t look like the kind of people those two are trying to kick out of this country, so she’s probably safe.