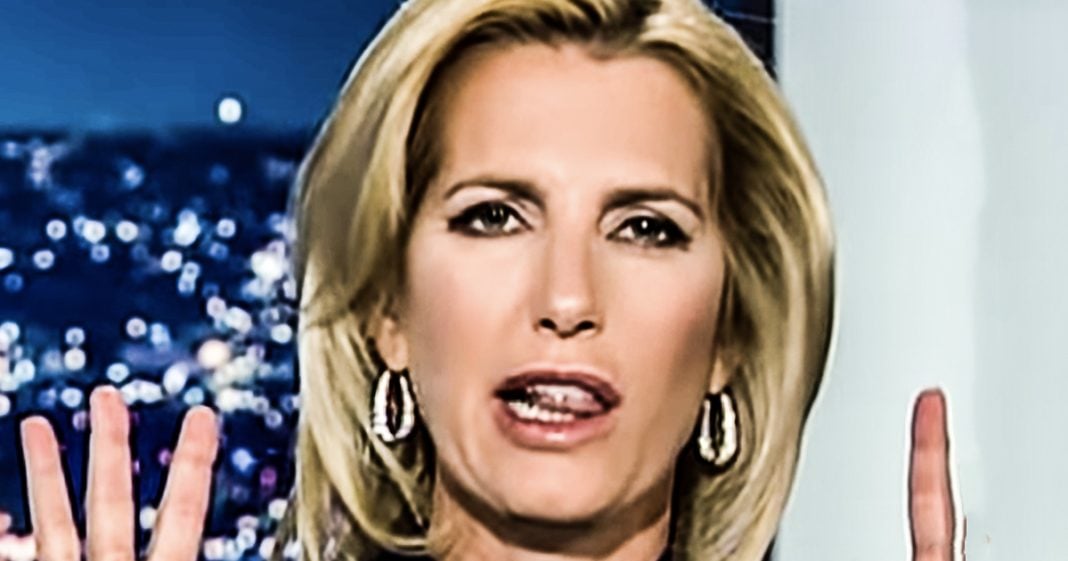 Fox News host Laura Ingraham didn’t just blow a dog whistle about race and immigration, she used a megaphone to spew her vile brand of hatred towards immigrants that are allegedly destroying the America that she claims to love so much. Fox is unlikely to punish her in any way, so it is up to consumers to boycott the companies that choose to advertise on her hate-filled program. Ring of Fire’s Farron Cousins discusses this.

Fox News host, Laura Ingram, blew the loudest dog whistle for the racist Republican base the other day during a segment on illegal and legal immigration. In fact, to borrow a phrase that many others have used in the last year and a half, she wasn’t blowing the dog whistle. She was absolutely using a megaphone to spew her message of hate. Here’s the clip and then we’re going to kind of dissect it a little bit afterwards, but here is what Laura Ingram, Fox News host had to say.

Laura Ingraham: In some parts of the country, it does seem like the America that we know and love doesn’t exist anymore. Massive demographic changes have been hoisted upon the American people. There are changes that none of us ever voted for and most of us don’t like. From Virginia to California, we see stark examples of how radically, in some ways the country has changed. Now, much of this is related to both illegal and in some cases legal immigration that of course progressives love. Remember the old Democrats, maybe some of them that Ocasio-Cortez referring to they used to think that borders mattered. But the new activists believe in forcing immigration laws is essentially an ongoing human rights violation. Of course, they want to abolish ICE and so forth.

So, the big thing to point out here, is it’s not just illegal immigration. Fox News, just like the Trump administration has moved on to attacking legal immigrants here in the United States. Laura Ingraham specifically says illegal and legal. Then we obviously have to get in to the remaking the demographics of the America that we loved comment. That is full blown racism. I mean, everybody understands what demographics mean, right? That’s the cultural and racial and religious makeup of a certain area. Key word there being the racial makeup of it. So, she is actually complaining that these non-white people are coming in to the United States and making areas less white. That is the argument that Laura Ingraham is making on Fox News.

Will Fox News punish her for this? Absolutely not. She is carrying their water. That is exactly what they want to hear her say. So, if we want to get this race [inaudible 00:02:34] off the air, the only thing that we can do is boycott the advertisers. We have seen this work so successfully in the past with other Fox News hosts and it’s time for Laura Ingraham to get a taste of that. Any company that wants to stand by Laura Ingraham and advertise on her show has absolutely every right to do that. Just like we as consumers have every single right to not shop for their products anymore. That is what needs to happen. Laura Ingraham proved without a doubt during that segment that she is a 100% anti-immigrant race hating hate filled woman. That is the nicest way that I can put what this woman is without getting in to very severe profanity at the moment.

But we have to call this what it is. This is racism. Laura Ingraham is racist. Her comments the other night proved that beyond a shadow of a doubt. Complaining about the demographic changes in the United States, saying that even the legal immigrants are ruining things, that refers to non-white people coming in to the United States from across the southern border. Laura Ingram’s advertisers need to feel the pressure now because that is the only thing that is going to get this hate monger off the air.