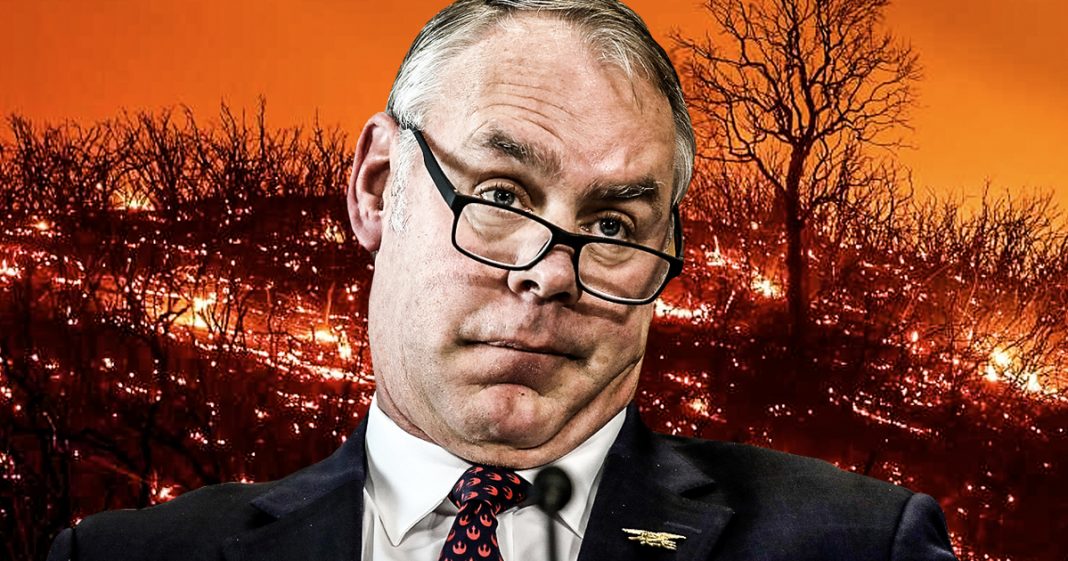 Ryan Zinke, the Secretary of the Interior, knows exactly who to blame for the largest wildfire in the history of California. It isn’t climate change, as all of the scientists and experts tell us, Zinke says that it is the rabid environmentalists who allowed this to happen. Ring of Fire’s Farron Cousins discusses Zinke’s insane logic and why he’s pushing his wild conspiracy theory.

In case you had forgotten, the state of California is currently experiencing the worst wildfire in the state’s history, possibly in the history of the entire United States. California is burning down right now. And what is the administration doing about it? Well, they’re blaming the people who are responsible for this, or at least they think they’re doing that. Earlier this week Donald Trump tweeted out that it is environmental laws that are making all the water in California go into the Pacific instead of being used to fight the fire, and we just got to cut down all the trees and then you can’t have a fire. Well, Interior Secretary Ryan Zinke tried to one-up him on that comment this week and released an op-ed in USA Today where he didn’t just blame the fact that, you know, water’s going to the ocean because water flows that direction. He said, “It is the radical environmentalists that are responsible for this massive forest fire out there in California.”

Specifically, because these environmentalists have been fighting for decades to stop the clear-cut logging that private companies and the Federal Government have sanctioned for decades. So, because of that, forests are growing taller, we’ve got some undergrowth happening here, and that’s just prime time for fires. It is not because of climate change as all the experts and scientists are telling us which is making the drought so much worse which creates the perfect conditions for fires, it’s the fact that the trees exist and that’s why they’re on fire. That is the argument coming from the Secretary of the Interior this week.

And as always, you kind of got to look below the surface to find the real motives here, and here’s the motive. The Department of the Interior is actually trying to lease out some of these areas in California that had been off-limits to logging for decades, and now they’ve got the perfect boogeyman. They’re trying to say, “Look, if we don’t lease these out for private companies to come in and make a profit the whole thing is just going to burn down anyway and then all these trees are useless, we get nothing out of it, the forest is gone, either way, so you may as well let us come in, hire companies to cut the trees down, sell the wood back to us, and then there’s no fire. Then nobody has to die, right?

This is a perfect excuse for environmental destruction here in the United States, and again, some of these areas where they’re wanting to go and log, number one, they’re not even on fire. Number two, these are areas that have been protected since at least the 1970s. We had finally hit a point in this country where we were planting more trees each year than we were cutting down. We were growing our forests back. We were growing our natural resources back faster than we could use them. That is what we are supposed to do. That is what humanity, civilization has done since the dawn of time, and we finally got back to that point.

And here we have this Administration that is so beholden to corporations that they want to use any excuse possible to go in there and clear-cut these forests so that these companies can make a profit. The fire is not caused because the forest is there. Climate change is directly responsible for the increasingly severe droughts in that area creating the conditions that spark the fires but this science denying administration will never admit that, and they will use these fires as an excuse to lease out these areas of forests that have been growing just fine for 45 years so that corporations can make a few extra dollars and so that we have a little bit less nice of an environment to pass on to our children.