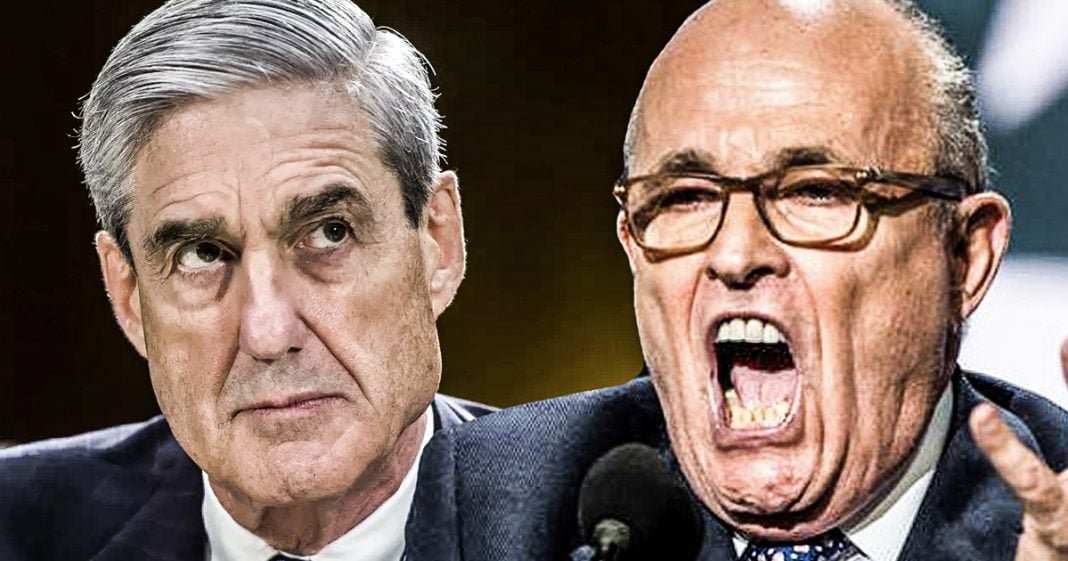 Donald Trump’s team of lawyers, led by Rudy Giuliani, has now officially rejected an offer for a sit down interview with Robert Mueller and the President over concerns that Mueller would ask about alleged obstruction of justice. Giuliani later called on Mueller to end the entire investigation, a request that could have been more easily achieved if Trump would just sit for an interview. Ring of Fire’s Farron Cousins discusses this.

On Wednesday, Donald Trump’s team of lawyers, led by Rudy Giuliani, sent a letter back to Robert Mueller’s office specifically declining a request for Mueller to be able to interview Donald Trump. They did, however, give a counter offer in terms of what terms they’re willing to meet under. That would be only if Mueller decides to narrow the scope of his questioning and doesn’t ask the president anything about obstruction of justice.

Here’s what’s interesting about all this. Later in the day after they sent this letter back to Mueller saying, “No, we’re not going to meet with you unless you agree to go ahead and just narrow the focus and not ask about that crime that we’re all pretty sure he committed,” Giuliani goes and does a radio interview where he says, “It’s about time that it ends,” talking about the Mueller investigation. I also think and I hope that special counsel, we do not want to run into the November elections, so hopefully he ends it by September 1st.

He won’t let his client go and talk to Robert Mueller. He doesn’t want it to interfere with the midterms, so he keeps saying it should end by September 1st, which is a date he just plucked out of the air. Three, he won’t let them ask his client about a crime that, again, we all saw him commit on Twitter last week. If Giuliani was serious about wanting this thing to come to an end, especially by September 1st, there’s only one way to do that. That is to have your client sit down with the special prosecutor’s office and tell them everything he knows.

Honestly, at this point, Donald Trump should be the one flipping on everybody else in some kind of plea deal. He’s the guy that needs to be trying to talk to Mueller and say, “Okay, listen. You go easy on me, and I’ll give you the dirt on everyone else. Just let’s avoid prosecution.” But that’ll never happen. Trump will never sit down for an actual interview, so now what we’re looking at is most likely going to be some kind of constitutional crisis. Mueller will more than likely have to subpoena Donald Trump.

Even though the Department of Justice itself says that yes, a sitting president can be subpoenaed, many Trump supporting lawyers out there have said no, the president can absolutely not be subpoenaed, so he probably wouldn’t listen to it. It’s something that would end up going to The Supreme Court and given the … I guess right now we have eight members of The Supreme Court until Kavanaugh gets confirmed, or unless Kennedy decides to hold off his retirement. It could end up being a stalemate on this particular issue.

I do, however, believe that the Supreme Court would end up saying, “Yes, the president absolutely can be subpoenaed.” Now, I know it’s a 4-4 right now, probably going to be a 5-4 before the end of the year, but we have seen on very rare instances a couple of the conservatives on that Court actually use their brain instead of their voter ID card to remind them which party they should be ruling in favor of.

There’s a glimmer of hope there, but nonetheless, Giuliani wants the investigation to end, but he won’t let his client go and talk to Robert Mueller. He also doesn’t want Robert Mueller to ask his client about obstruction of justice, which means any other lawyer in this country would already point this out. Giuliani is near certain that Donald Trump did commit obstruction of justice. You would not disallow your client to speak on this if you didn’t think they were guilty of it.

That’s what I say when I say every time Giuliani goes out there and says something or does anything, even when it’s in writing to Robert Mueller, he makes things so much worse for his client, because now the special prosecutor’s office has a letter from Giuliani saying, “Yeah, don’t ask him about obstruction of justice,” which every prosecutor in that office is probably thinking, “Okay, that means that this man definitely obstructed justice.”