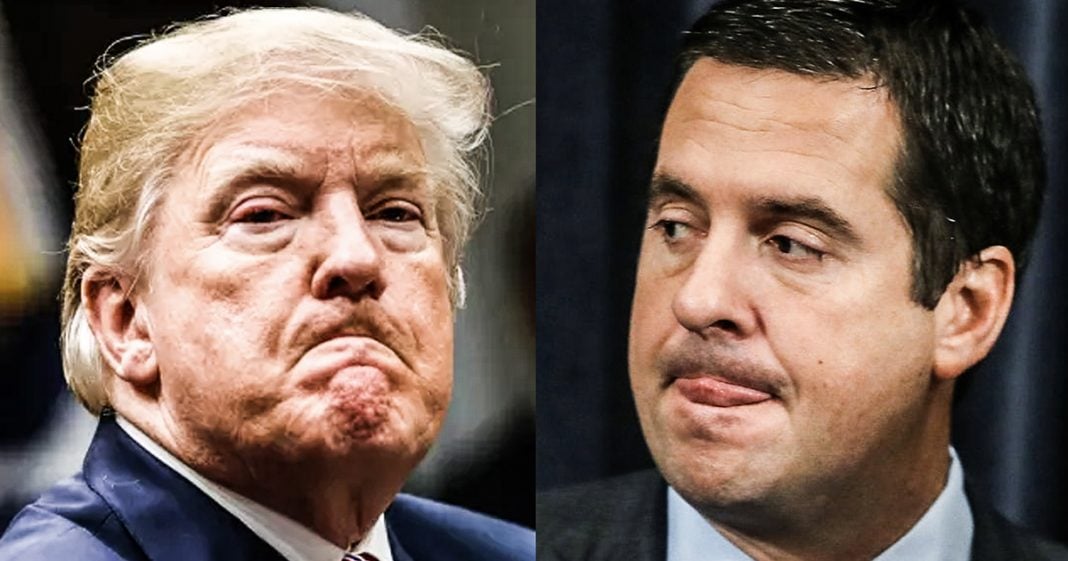 Devin Nunes has been one of the President’s most ardent defenders, and has even bent the rules to keep Trump one step ahead of the investigations. But now Nunes faces a bleak future after tapes of him admitting that publishing stolen emails was a criminal activity, and after laying out his political plan to impeach Rod Rosenstein. Things are bad for Trump, and Nunes just made them so much worse. Ring of Fire’s Farron Cousins discusses this.

On Rachel Maddow’s show on Wednesday evening, she played tapes of Devon Nunes, one of the biggest Trump supporters in the US House of Representative, at a fundraiser from July 30 where he kind of laid out his plan for obstruction of justice in order to protect Donald Trump. He also admitted that what Donald Trump did was absolutely a crime. Now before we get into the clip in just a moment, it should be pointed out that this clip was obtained at a fundraiser, obtained by a group called Fuse Washington. They’re a liberal group. They paid for entrance in there, secretly recorded it. It was July 30 in Spokane, Washington. Here’s what Devon Nunes had to say.

Devon Nunes: Now if somebody thinks that my campaign or Cathy’s campaign is colluding with the Chinese, or you name the country, hey, could happen, it would be a very bad thing if Cathy was getting secrets from the Portuguese, let’s say, just because I’m Portuguese, my family was. So Cathy was getting secret information from the Portuguese. You know, mar or may not be unusual. But, ultimately, let’s say the Portuguese came and brought her some stolen emails. And she decided to release those. Okay, now we have a problem, right? Because somebody stole the emails, gave ’em to Cathy, Cathy released ’em. Well, if that’s the case, then that’s criminal.

Audience Member: But also, on things that came up in the House on Rosenstein impeachment thing. And it appears from an outsider that the Republicans were not supported.

Devon Nunes: Yeah, well, so it’s a bit complicated, right? And I say that because you have to … So we only have so many months left, right? So if we actually vote to impeach, okay, what that does is that triggers the Senate then has to take it up. Well, and you have to decide what you want right now because the Senate only has so much time. Do you want them to drop everything and not confirm the Supreme Court justice, the new Supreme Court justice? So that’s part of why, I don’t think you have … You’re not getting from, and I’ve said publicly Rosenstein deserves to be impeached. I mean, so, I don’t think you’re gonna get any argument from most of our colleagues. The question is the timing of it right before the election.

McMorris Rodgers: Also, the Senate has to start–

Devon Nunes: The Senate would have to start, the Senate would have to drop everything they’re doing and start to, and start with impeachment on Rosenstein. And then take the risk of not getting Kavanaugh confirmed. So it’s not a matter that any of us like Rosenstein. It’s a matter of, it’s a matter of timing. So therein lies … So it’s like your classic Catch-22 situation where … I mean, we were at a … This puts us in such a tough spot. If Sessions won’t un-recuse and Mueller won’t clear the president, we’re the only ones. Which is really the danger. That’s why I keep, and thank you for saying it by the way. I mean we have to keep all these seats. We have to keep the majority. If we do not keep the majority, all of this goes away.

Okay, super long clip there, I understand. So I’m gonna try to make this as brief as possible. First and foremost, Nunes admitted that if you received emails that were stolen by a foreign country and you then release them, then yes. You’ve committed a crime. If you were involved in any step of that process, that is criminal activity, according to Devon Nunes and we do know for a fact that that did happen with the Donald Trump campaign. So Nunes right there admitted that his favorite guy, the guy he’s bent the law for, pretty much by trying to keep him one step ahead of the Senate and the House investigations and the Muller investigation, admitted that his guy committed a crim. But more importantly, this stuff about impeaching Rosenstein and getting session to un-recuse himself and stopping this Robert Muller investigation. Those right there are very clear admissions that Nunes’ intent is to obstruct justice in order to protect Donald Trump. We have a motive. We have a plan. We have enough to bring charges against Devon Nunes at this point.

Now, we do have some progressive, liberal, democrat, whatever you want to them members of the House of Representative who today and even after the clip aired, have been calling for Devon Nunes to resign. Resignation’s not good enough. This man needs to be led away in handcuffs, making him the second Republican of the week to be led away in handcuffs. But that’s what needs to happen. This is very clearly obstruction of justice. We know that it is Nunes on the tape. We see what he admitted there. We can hear it. We know what happened. There’s plenty of witnesses there. This is a slam dunk case right now. Prosecutors should be working at this very moment to take Devon Nunes out of the game, out of politics, out of our daily conversations because what he admitted on that tape is 100% obstruction of justice.