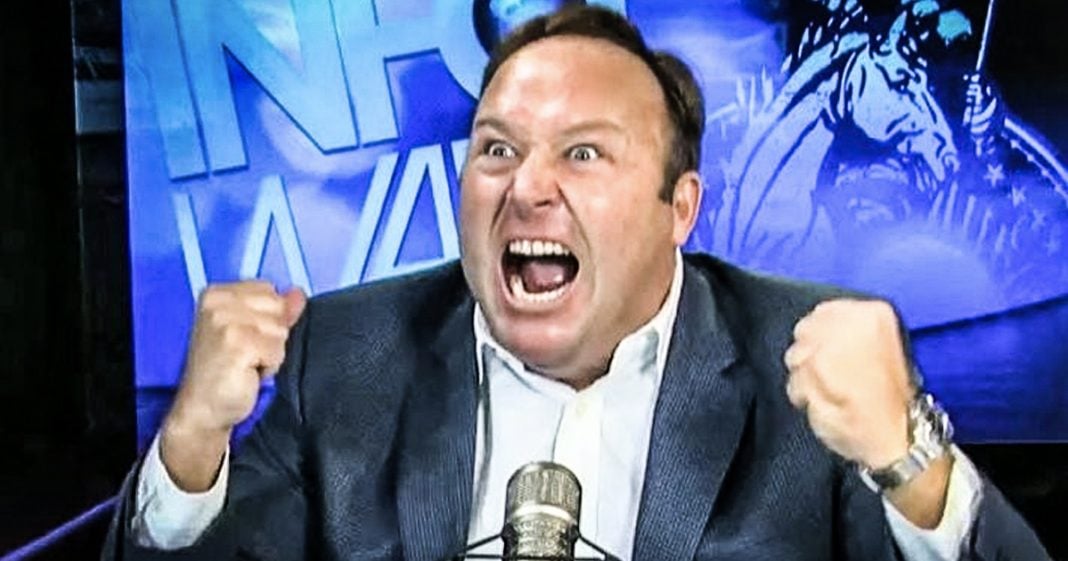 In case you were on the fence about whether or not to support YouTube’s decision to ban Alex Jones, here’s a story that should help you make that decision – Alex Jones’ attorney is trying to persuade the court system to let him release the home addresses of the Newtown victims’ families that Jones has been attacking for years. Some of these people have had to move repeatedly since Jones became attacking them, and now his lawyer wants to open them up for assault and attacks from Jones’ supporters. Ring of Fire’s Farron Cousins discusses this.

I know that there’s a lot of progressives, or I actually need to call them, so-called progressives out there, who are still really mad about the fact that YouTube and Spotify and Apple banned Alex Jones from their platforms. It’s a violation of free speech, they claim. Even though free speech actually only applies to the government, not limiting what you can say, but nonetheless, the mean well.

I know they don’t like Alex Jones, they hate the things he has to say, and they think he’s a horrible human being, which he is, but they’re still fighting for his right to be able to spew his hatred, his vile, his slander, on these networks.

Well, my question to them now, is this, how do you feel about the fact that Alex Jones’ lawyers are arguing in court this week, that they should be allowed to publicly release the addresses of the victims from the Newtown shooting that they’ve been harassing for six years.

That’s what they’re arguing. They wanna take the parents, who lost their children, in one of the worst school shootings in the history of this country, and release their addresses.

Now these aren’t just people who’ve been living happy, quiet lives since their children died. These are children who’ve been harassed on a constant basis, since Alex Jones claimed that, that operation was a false flag and that the children were actors and nobody actually died.

Some of these families have had to move more than six times, because of the harassment they are receiving at the hands of Alex Jones supporters.

And now his lawyer, wants to release those addresses to the public, so that any psychopath out there, can go and find them and harass them, or worse.

So, I ask again, do you still stand by your decision to stand by Alex Jones right to spread these lies? Slander is not protected speech, corporations are not required to allow you to have free speech. There is nothing that Alex Jones has been doing that his been within the realm of protect speech. He’s hosting it on private platforms, he’s saying things that are against the law.

So where is the argument? That’s what I don’t understand, all these so-called smart people out there, trying to tell us, no he has every right to do it, I hate him, but he’s a right to do it. No he doesn’t.

I suggest you spend five seconds looking up what laws in this country actually cover and what the US Constitution says.

Alex Jones is a horrible piece of crap, who is doing horrible things to people who have been through horrible experiences. And if you have the audacity to say that he has a right to do that, even though it’s technically illegal, then you, not quite as bad as Jones, but you’re knocking on that door.