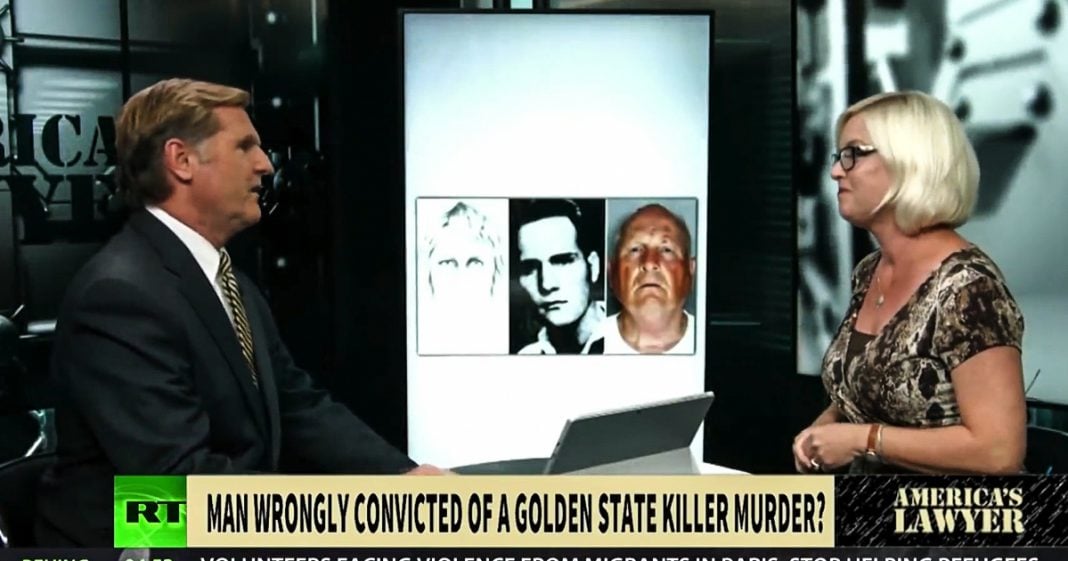 Via America’s Lawyer: Mike Papantonio is joined by Legal Journalist Mollye Barrows to discuss whether The Golden State killer might have been behind a Southern California murder that killed two girls in Central Valley Towns while the suspected The Golden State Killer, worked nearby as a cop.

Mike Papantonio: A decade’s old rape and murder case is under review in Southern California for possible links to the East Area Rapist, aka Golden State Killer as the Orange County District Attorney’s Office has agreed to reopen the case involving William Evans, who is convicted of killing Joan Anderson in her Fountain Valley home in 1979. Joining us to talk about this is Mollye Barrows, legal journalist for the Trial Lawyer Magazine. Mollye, as you look at this case, first of all lay it out for us. How is it that we’re here this late talking about this man on the right who might be responsible for these murders?

Mollye Barrows: It’s so interesting. In a nutshell, with the arrest of Joseph DeAngelo they’re taking a look at a lot of unsolved murders that were committed around that timeframe. Mid to late ’70s on into the mid ’80s, anything that may have potentially come back to Joesph DeAngelo, the Golden State Killer. There were two murders, 1973 and 1975, in an area where he worked close by. In Exeter, he was a police officer there.

This man Clifton, Oscar Clifton was arrested and convicted for murdering a 14 year old girl, and her name was Donna Jo Richmond. The evidence that they found at the scene was an invoice book under the little girl’s bike. She had been abducted off her bicycle, her body found a little distance away, not far from where another girl had been murdered a year and a half earlier whose crime was unsolved.

This Clifton cat was convicted, he was sentenced to prison, he died in 2013 maintaining his innocence the whole time. Now that they’re reopening a lot of these cases, they’re looking at the other death that had happened before the girl that he was convicted of killing was killed, and that girl’s name was Jennifer Armour. They’re looking at her case to see if perhaps the Golden State Killer could have been involved. At the time, police suspected that Armour and this other young lady Donna Jo Richmond had been connected. Well, because they had a conviction of Clifton, they were thinking well maybe he did this one too.

Mike Papantonio: He always maintained his innocence. He died in prison. DNA, tell me about DNA.

Mollye Barrows: No physical evidence that links him directly to this crime. All the evidence was circumstantial. As they’re reviewing this and there are a number of authorities, whether it’s a local detective or another attorney, the man’s own family, his children who are now grown don’t believe he did this particular killing. They think that the Golden State Killer, DeAngelo could be responsible as well, and they also want him to look into this case, as well as the Armour girl who was killed a year and a half earlier because there are similarities and there are similarities between these cases and other cases that they do believe that the Golden State Killer committed.

Mike Papantonio: The operative part of the story is, up until his death, he maintains, “I didn’t do it.” Go back and look at the police reports, the police investigation, we find out that, you know, maybe they had one in hand, so they said, “Why look any further?”

Mollye Barrows: Oh, and it gets even better than that. I’ll go down some of that evidence in a second. Last November, so here you have all the scuttlebutt that recently happened last fall about the Golden State Killer being found and the DNA that linked him to those cases and how they were looking into all these other cases to possibly connect him to that. Suddenly, the police who put Clifton in jail said, “Hey, by the way, we want to know if you can connect Clifton to the previous homicide a year and a half.”

To me, that came across like, “We’re already trying to cover our tracks and connect him to this homicide because we knew there were similarities,” so instead of saying maybe we were wrong with the first guy and we should look to see if DeAngelo’s responsible for both of these murders, they’re now trying to make a deceased convict responsible for both murders.

Mike Papantonio: In other words, what we see so often and having been a prosecutor, I would see this sometimes in the work by police officers. It is tunnel vision. You get set on, this is the perp. This is the person. I have them in hand. I don’t have to do any work. I can close the case. I don’t have to move on. This story screams out that exactly. There were other things that, now they’re looking back and they’re saying, “You know, a lot of similarities here. Yes, this person was in the area. Yes, this person is the same MO kind of issue.” All of a sudden now, the police are having to defend themselves. I mean, they’ve been having to defend yourself throwing somebody, 22 years the guy was in prison?

Mike Papantonio: 22 years this guy rots in a prison, does everything he can to get out. Says, “Look, I didn’t do this.” Was there anything else about …

Mike Papantonio: Was there anything else that was unique, had this man had a record or anything that was similar to …

Mollye Barrows: Now, he had had, 10 years before in ’63 he had been arrested for, I can’t remember if it was for rape or attempted rape, but he had attacked a women. He’d been convicted of it, sentenced to 180 days in jail and was out. He lived near where this little girl’s body was found. They found the invoice book with his name on it, but again, no physical evidence. In fact, all the evidence they had against him was destroyed less than a year after he was convicted, before he even had a chance to appeal.

It turned out, whatever evidence they could find to reexamine, tire evidence, there was flaws in that, there were flaws in witness statements, there was, the police put his picture out before they even asked witnesses to identify him. A lot of loopholes that would make you wonder. It’s a shame that it took the arrest of a true murderer to bring all these potential problems to light.

Mike Papantonio: Thank you Mollye, this is one I hope you’ll continue following.