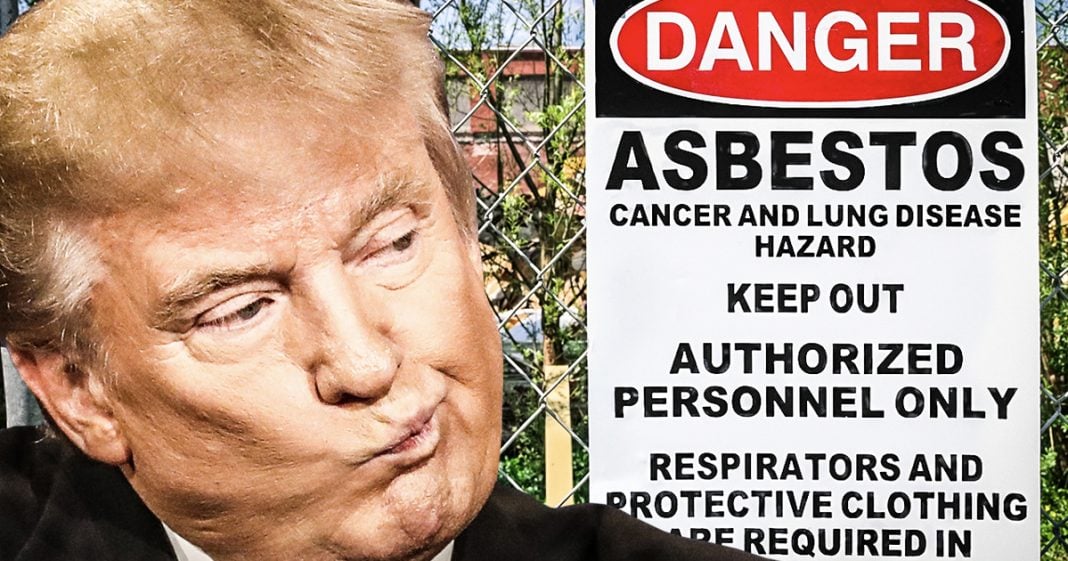 The Trump administration is working on a new rule that would allow even more toxic, cancer-causing asbestos to be used in manufacturing in the United States. This is a move that will absolutely result in American workers and consumers dying, there’s no question about that. But it’ll save corporations money, and that’s all that matters. Ring of Fire’s Farron Cousins discusses this.

In terms of human health, the Trump administration and especially the Trump administration’s EPA has done some really horrible things for the American public. They have basically tried to roll back any rules that would help keep our air cleaner or our water cleaner, our soil cleaner, our cars more fuel efficient. They’re trying to destroy everything. But what they’ve done right now is quite possibly one of the worst things to so far come out of this administration. They have decided that they’re going to allow asbestos back into the manufacturing process here in the United States and I know there’s still several industries that actually use asbestos in their manufacturing. Asbestos is in products that we use every single day without even realizing it. But this EPA under this administration wants even more asbestos. Companies are begging them. They want more asbestos. We can’t have enough of this stuff. Here’s what’s happened.

June 1, the EPA came out with a new rule that was gonna allow them to reevaluate how they evaluate toxic chemicals here in the United States and asbestos, even though it’s not a chemical, it is a fiber, falls under that category and so they’re not necessarily gonna take a look at the risks that any of these chemicals pose anymore if they’re in the air, in the soil or in the water. Those are out the window and asbestos is something, the fibers that you inhale, meaning it no longer has to pass the test that it’s not harmful if it’s in the air because they’re not gonna test for that anymore, which will allow for more asbestos to come into the United States here. There are 60 countries across the planet that have banned the use of asbestos, banned it. You cannot bring asbestos into those countries, 60 of them. But here in the United States, we haven’t banned it. Like I mentioned before, there are products that we use every single day that have asbestos in them. One of the biggest consumers of asbestos here in the United States is actually the automobile industry.

Nearly every single part of your car has some kind of asbestos in it, especially the brakes. Brake pads, horribly filled with asbestos, which means that the people in the factories who manufacture those brake pads are inhaling asbestos. Those people, a lot of them, will end up developing lung cancer, such as mesothelioma and now that the EPA doesn’t want to look at if these things are toxic if you breathe them in and if they don’t test for that, then you get a free pass on that, we’re gonna have more asbestos in this country and we’re gonna have more people dying of incurable lung cancers from an inhalation. That’s what’s happening. That is what this administration is pushing for right now. This was one of Scott Pruitt’s last efforts at the EPA before he resigned in disgrace and Andrew Wheeler, the guy who’s now running the EPA, the former co-lobbyist is 100% on board with this. Why? Because it’s what corporations want. They don’t care how many more people die from mesothelioma.

In fact, there is actually these old asbestos industry documents where one of the executives said, “Well, hey, if you lived a good life working with asbestos, why not die from asbestos.” That is what their own internal documents said. They knew it was deadly, dating all the way back to the late 1800s. In fact, you want to go even more historical, there are actually reports back from ancient Greece where they worked with asbestos and they happen to notice that people who worked with asbestos a lot seemed to die from these lung infections. They didn’t know what it was back then. But they knew that there was a link between asbestos and lung problems. It was confirmed back in the late 1800s. The industry knew about it back then and so here we are, the year 2018 and rather than banning this substance like all the other intelligent countries across the planet, we’re actually trying to bring more of it into this country. We’re moving backwards while everybody else moves forward and it is 100% to benefit corporations who don’t give a damn about human life here in the United States.