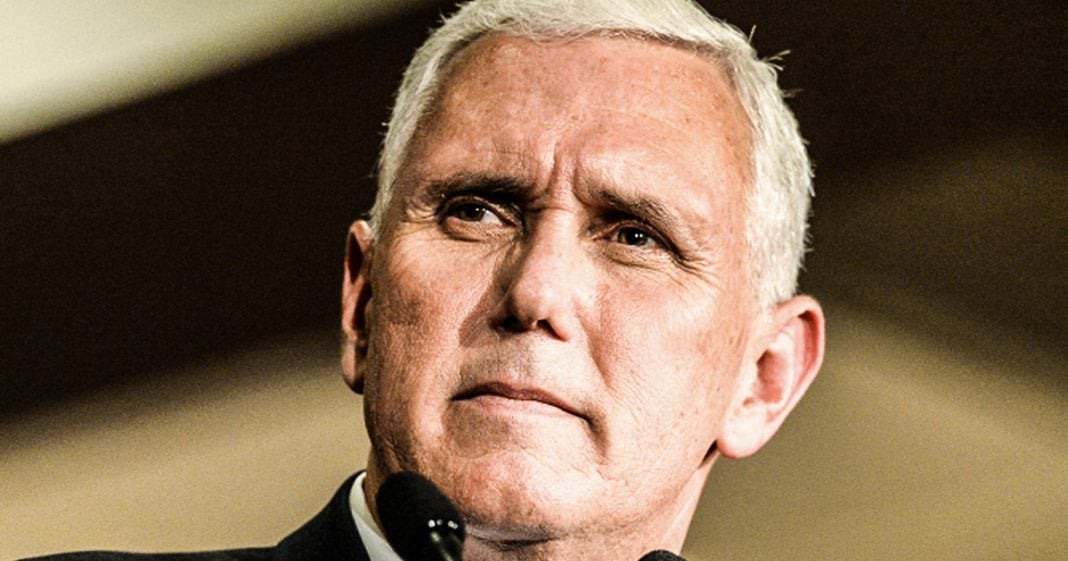 Vice President Mike Pence likes to claim that he is a champion for religion, and he went as far as to write several papers in the 1990’s about the moral responsibilities of the President of the United States. Specifically, during the Clinton investigation, Pence said that a President who has an affair and is therefore immoral should 100% be removed from office. Curious to see if he believes the same thing today, given his boss. Ring of Fire’s Farron Cousins discusses this.

At the time, he was just kind of a local conservative radio host who also did some writing gigs on the side. During the ’90s, during the Bill Clinton impeachment investigation and all of that, Mike Pence wrote on two separate occasions that a president has this moral obligation and that Bill Clinton should be impeached because he has not upheld the morality of the office of the presidency.

Here’s some actual quotes from what he wrote. “If you and I fall into bad moral habits, we can harm our families, our employers and our friends. The President of the United States can incinerate the planet. Seriously, the very idea that we ought to have at or less than the same moral demands placed on the Chief Executive that we place on our next door neighbor is ludicrous and dangerous.”

So, Pence says that we need to hold the president to the highest possible moral standard and nothing less. Interesting. We’ll get back to that in a minute.

He goes on. “Throughout our history, we have seen the presidency as the repository of all of our highest hopes and ideals and values. To demand less is to do an injustice to the blood that bought our freedoms.”

That was about Bill Clinton. Now, he later on did go and say in those articles that, yes, it’s also obvious Bill Clinton committed perjury and so therefore he should also be impeached for that. But he absolutely was calling for the impeachment of Bill Clinton in these articles and on his radio show just for being immoral in the White House.

Trump, on the other hand, has lied not under oath, but he’s lied to his family, he’s lied to the public, he’s lied to every single person possible about all of his affairs, not to mention the fact that the man is currently being sued by at least 19 different women who have accused him of some kind of sexual harassment or assault. One of the women is also suing him for defamation because he attacked her on Twitter after she came out with these allegations.

You want to talk about morals? I don’t think Bill Clinton has anything on the kind of crap that Donald Trump has pulled in his past. Why is Mike Pence so silent? The answer is simple. Republicans, especially the religious Republicans, the allegedly religious Republicans, they’re only religious when it benefits them, like when they’re campaigning. But when it means that they’re going to have to hold one of their own accountable, oh, no, no, no, no, it doesn’t apply to us. Just like all those religious leaders who when this affair broke, they came out and said, “We’re going to give him a mulligan. You know, we forgive him for his. Let he who is without sin, cast the first stone.” They were ready to lynch Bill Clinton back in the ’90s because of this, and yet they’re giving this dude a pass even though he’s done things a hundred times worse than what Bill Clinton did on a scale of about a hundred times more than Bill Clinton did just because he’s their guy.