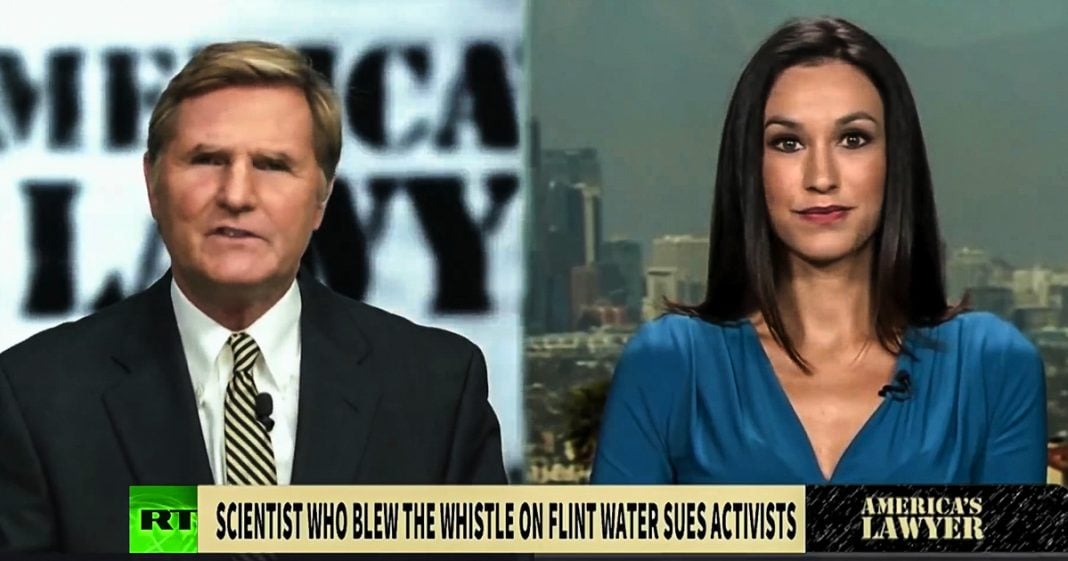 Via America’s Lawyer: Marc Edwards, the Scientist who blew the whistle on the Flint water is suing a flint resident and 2 environmental activists for defamation and seeking $3 million in damages. RT Correspondent Brigida Santos joins Mike Papantonio to discuss the latest in the suit why Edwards is claiming there’s been an attack on his professional reputation.

Mike Papantonio: In 2016, residents of Flint, Michigan turned to a Virginia Tech scientist to fix the city’s water crisis. Marc Edwards had spent the previous decades fighting the federal government over drinking water protections in Washington DC. His success in the nation’s capital made him a national hero. In Flint, he taught residents how to take their own water samples and publish the results online. He even proved that local officials knew about the problem and failed to act. But now Edwards has filed a defamation lawsuit against three Flint activists and his critics suspect an EPA grant maybe behind all that. Joined me to talk about this is RT correspondent Brigida Santos.

Brigida, I’m wondering how much money did the EPA grant Marc Edwards and what’s the money for?

Brigida Santos: The EPA has awarded Virginia Tech $1.9 million in grant money to fund a project that Marc Edwards is going to lead and oversee. This is a really good project. It’s a citizen science and engineering project that will teach consumers across the nation how to test and control their water and make sure that there’s no lead in it. But because of the timing of his lawsuit and the nature of it, critics are now wondering if that grant is sort of influencing him here to take out this lawsuit.

Mike Papantonio: Well, you know, I’ve been involved in many, many environmental kind of cases. A lot of times you’ll have what you call splinter critics. You’re not doing it exactly like they want it done. They’re not quite happy with … You’re not doing it their way. It’s kind of a my way or the highway. Is that happening? Because I’m wondering who is Edward suing and how does he say that these people defamed him? Is it just a splinter group operating within this group of people? Do they have big credibility?

Brigida Santos: This is a really bizarre case and that’s because he’s suing his former co-researcher on his project. He’s also suing one resident of Flint and a water advocate. Now he’s alleging that they defamed him by publishing a letter online, an open letter, to the science and engineering communities asking how the residents of Flint could get a complaint filed against him for reportedly making harmful statements on their behalf. Now many residents of Flint signed this open letter, but I don’t really think that this is actually about defamation. I think this is about something deeper. More about a war between researchers who are trying to get federal grants.

It seems like there’s some sort of competition here because there are a lot of petty arguments back and forth between not only the researchers that he is taking this lawsuit out against, but he had also filed another complaint against a fellow Flint researcher in March this year. That was somebody from Wayne State University who had received $3.1 million in federal grant money from the National Institutes of Health to investigate Legionnaires’ disease. It seems here that everybody wants to be the hero here and they want to get that grants money. They’re trying to take each other down through these petty complaints and lawsuit.

Mike Papantonio: Well, you and I have talked on this show in the past about what I call biostitutes. Those are scientists that you can hire. You see industry hire them all the time. Last two cases I finished, they hired biostitutes. They were people at universities. They hired them to be able to say whatever that corporation wanted them to say. This character’s a little different though. He’s got some bonafides behind him. This is a guy that’s worked in this business for a long time. If you look at this prior history, it has been to the benefit of that community. The other place you see it is you see the media. They get much media influence comes into a lot of this. You’ll have advertisers that influence media.

Media takes the side of the advertisers. It’s a fairly complex kind of process. The good thing about this lawsuit is all of that can come to the table and we can figure out what is going on here. How did the defendants in this case respond to the accusations that are being made here, Brigida?

Brigida Santos: The defendants say that Edwards had made false statements about them. They are opposed to it obviously. They’re saying that this is an attack on free speech. As you said, Edwards has dedicated the last few years to defending the people in Flint, but again as you said about the biostitutes, what I find very, very troubling is that he, as you mentioned, had exposed the fact that state officials were lying about the issue. They knew about it.

They were failing to act, but in his complaint against that Wayne State University professor, he says that due to that professor’s research and expertise, two officials are now being charged with felony. It does seem as if his tune has changed after taking that EPA money. That’s something that I find very interesting.

Brigida Santos: Michigan governor Rick Snyder has said that he’s declared the water safe to drink, but of course, the residents don’t believe the local government because they have been lied to for so many years. As for improvements, there have been little improvements. Now Flint has only spent about 17% of the government and state funds that have been unlocked to replace those 18,000 lead pipelines that they were ordered to fix and replace by 2020. There’s still a long way to go. Also, state officials are under investigation still. They’re in trials, so we’ll see what happens here.

These residents are really being caught up in this bureaucratic nightmare between not just government officials, but also the researchers who are trying to get funding.

Mike Papantonio: Brigida, thank you for joining me. This is a story we’ll continue to cover because it’s got a lot of pathways that lead out.