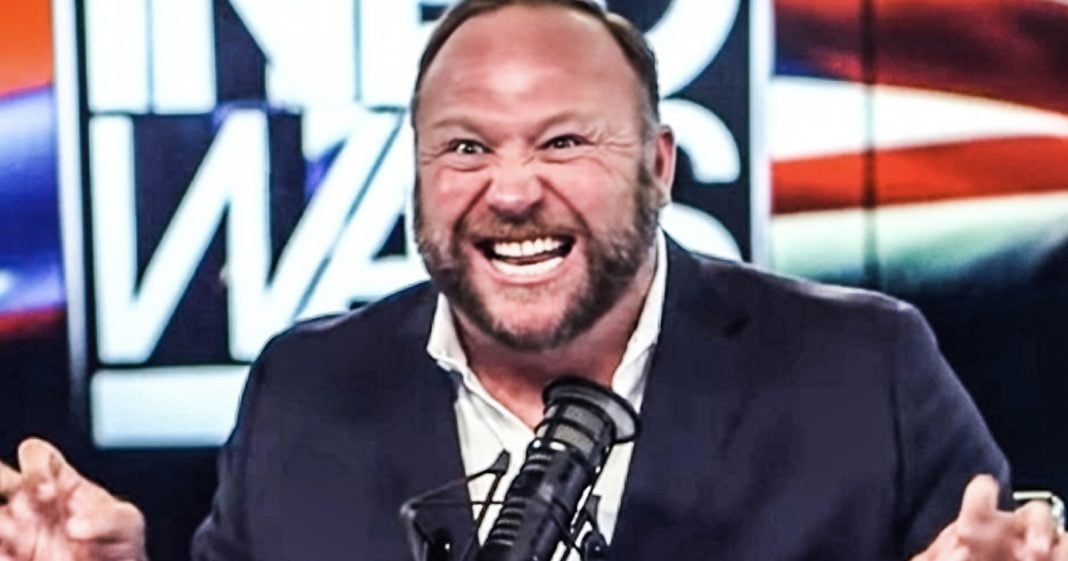 Conspiracy theorist Alex Jones has been banned by several major media outlets in the last few days, with YouTube finally pulling the plug on his YouTube channel with 2.4 million subscribers. There seems to be a rift among the public as to whether or not this is a good move, but Ring of Fire’s Farron Cousins explains the REAL motive behind these companies’ decisions to pull the plug on Jones.

Spotify, Apple, Facebook and now YouTube have permanently banned Alex Jones from posting his Info Wars content on their platforms. Yesterday YouTube became the latest. They banned his channel that had 2.4 million subscribers taking away a large chunk of Alex Jones’ revenue for his Info Wars project. Here’s the thing, right now there seems to be some division, even amongst the left as to whether or not this was a good thing or this was a bad thing. On one side you have people saying, “Hell yeah, they should ban him. His hate filled, slander filled, propaganda conspiracy theories have no place on these platforms.” The other folks, who agree that Alex Jones is a horrible person spreading lies and conspiracy theories, however they say these companies should not have the right to censor free speech because if they go after Alex Jones, it’s going to be only a matter of time before they start coming after other people, and it’s going to hurt the progressive media content creators who use these platforms. So they’re mad. They say we shouldn’t let the tech billionaires be the deciding factor here.

Here’s the thing, this isn’t a First Amendment issues, it’s not a free speech issue because it’s not the government censoring somebody’s speech, so you need to drop that argument immediately. But more importantly, these companies weren’t trying to do the right thing by firing Alex Jones, they don’t just hate Alex Jones and that’s why they got rid of him. No, no, no, no. What they’re doing right now is trying to avoid the lawsuits that are trying to sink Alex Jones. At least five different defamation suits are currently active against Alex Jones. At least five that we know of. And so what happens is that the families who are suing Alex Jones for defamation, the individuals, the victims of some of the worst atrocities we’ve seen here on American soil, they’re all going after Jones because of the horrible lies he’s spread about them, and the resulting attacks that these families have gotten verbally, and in a few cases physically because of the hatred that Jones has spread. That does not deserve a voice in this country.

That kind of speech is actually not protected but again, these tech giants, these social media platforms, whatever, they didn’t get rid of Jones because of that. They got rid of Jones because they’re afraid that they’re next in line to be sued and yeah, that would be a pretty difficult lawsuit to prove, but it is winnable, but these companies have the money, right? They can afford it. It’s not like they’re going to get hit for billions or probably even millions, but they’re taking this preemptive step to get rid of Alex Jones so that they can avoid any negative publicity that would result from a side lawsuit against them for hosting Jones’ defamatory content, which again, they absolutely could be sued for it, it’d be difficult, but it is winnable. So they’re trying to jump out ahead of that.

This isn’t about censoring free speech. It’s not about doing the right thing, and it’s not about hatred for Alex Jones. It’s about these corporations trying to stave off potential lawsuits so that they don’t lose any money. They’re not doing the right thing, they’re not doing the wrong thing. They’re doing what’s in their best financial interest. They didn’t suddenly grow a conscience. They didn’t suddenly grow a heart, and they didn’t suddenly start hating the First Amendment. They just realized that the thing that they’ve loved more than anything in the world is money and they don’t want to do anything to risk losing some of that money so they boot Alex Jones, they get some good publicity for doing the right thing while few people truly know why they did it. But I promise you, that they did it because they’re afraid that after those defamation suits take out Alex Jones, that these families are going to come to the people who hosted his content and helped spread his crazy conspiracy theories. That’s why they did this.