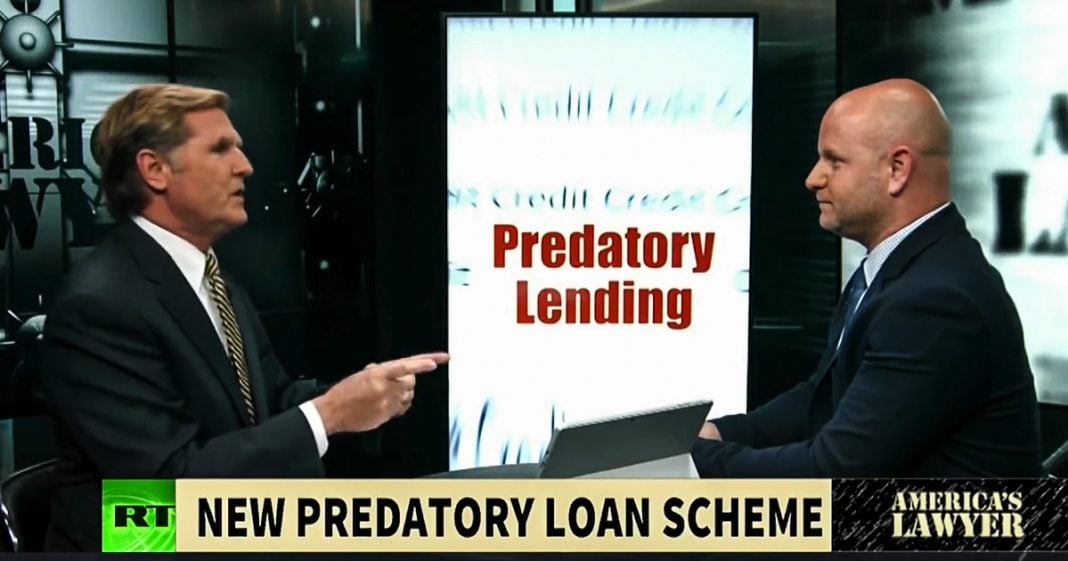 Mike Papantonio: This is amazing to me. Tim Geithner, another Obama kind of hang around. This guy’s come through the DNC. He’s been like hanging onto the DNC forever. Tim Geithner and Larry Summers. They’re the economic gurus. Tell us the story about Tim Geithner and now he is the king of predatory lending.

Farron Cousins: Right. What Tim Geithner did after leaving the Obama White House, he came and he founded this group, this Mariner Financial. And what they are is they’re the same kind of predatory payday lenders you see on the street corner except they’re wearing nice suits and ties so they feel more like a bank, like a legit business other than these hustlers on the corner.

But no, they’re exactly the same except they’re a little worse what Tim Geithner’s doing. They’ve got this new scheme, this Mariner Financial, run by Geithner where they’re just mailing checks, blank checks. A certain dollar amount. All you got to do is sign it. To poor people that they have specifically targeted just hoping that they will cash that check and then get hit with a 40% interest rate.

Mike Papantonio: Well the way they’ve targeted them is they figured out, here we have a house is there any equity in the house? They’re people that they target. They understand the people very well and they say, “This is somebody that we can really take advantage of. Let’s send them this blank check,” for … Here’s where it really gets weird. They actually are doing research. If somebody goes to a hospital day one, they’ve got a bill for $5000. All of a sudden the $5000 check shows up in that person’s mailbox to pay for the medical costs. All of a sudden, “Yeah, we’ll take the check,” and it’s business as usual.

Tim Geithner, the guy who was always on the side of Wall Street. He was one of the people pushing Obama not to prosecute Wall Street for all the crimes that they were responsible for the 2008 burn down.

Farron Cousins: And just like everybody else from the Obama administration, Holder went back to Covington Burling for the paycheck. Geithner goes back to predatory lending for the paycheck. And what Geithner has done here. This little scam. It targets people who are not as financial desperate as somebody who would walk into the cash advance place. These are people who just happen to fall on a hard time. Like you said, the expensive medical bill. The ridiculous car repairs. They wouldn’t ordinary walk into one of these shops. But, the check comes to your house and you know these bills are piling up, it becomes a lot more attractive and you’re more likely to sign it when you know you can do that in the privacy of your own home and not have to go into one of these places that has such the bad reputation.

Mike Papantonio: Got you. Farron cousins, we’re out of time. Thank you for joining me. We’ll pick up with some more stories next week.