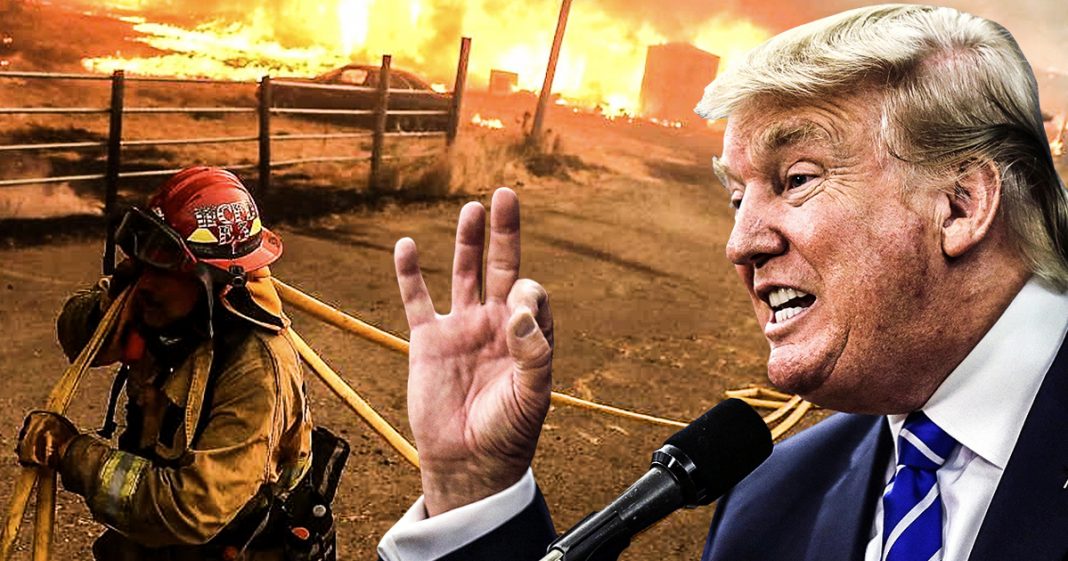 The state of California is suffering from major wildfires at the moment that have caused multiple deaths, but rather than trying to fix the crisis, Trump is out there tweeting that the reason the fires are getting so out of control is because environmental laws aren’t letting them get enough water to spray on them. Not only is this false, but it shows that he has no concept of crisis management. Sadly, as Ring of Fire’s Farron Cousins points out, that wasn’t the worst thing Trump said about the fires.

In case you weren’t aware, the state of California right now is currently being ravaged by wildfires. There are fires across the state. Seven people so far, as of right this second, have lost their lives. Buildings, homes have been destroyed. Countless miles, square miles of forest have been destroyed. And the President of the United States blames the whole damn thing on environmental loss.

This is what Donald Trump tweeted out on Sunday with regards to those wildfires in California. “California wildfires are being magnified and made so much worse by the bad environmental laws, which aren’t allowing massive amount of readily available water to be properly utilized. It is being diverted into the Pacific Ocean. Must also tree clear to stop fire spreading.” So Donald Trump, instead of saying it’s being made so much worse by, I don’t know, climate change, which is what all of the scientists are out there telling us right now, he says it’s because California’s wasting water by letting it just go into the Pacific Ocean.

Now let’s not forget that the state of California’s actually still currently in a drought. They never really got out of the massive drought that they were in many years ago were that started many years ago. It just eased up a bit for a while. No, there’s not enough water to go around to just be squirting it all over these fires, that’s why they got out of control. There’s no environmental laws preventing fire fighters from doing their jobs. And most importantly, the answer isn’t to just cut down more trees. I mean, the logic there is, “Well you can’t have a forest fire if you don’t have a forest.”

No. That’s not how this works. You are the dumbest human being that has ever served in the Oval Office. The reason we’re having these wildfires, and we had some in Colorado about a week and a half ago that nobody even talked about, is because of climate change. Can we stop, can we just stop for a minute listening to idiot politicians about weather phenomenon, about climate, and things like that and maybe instead focus on what the scientists are telling us? People like Michael Mann, who is out there every day trying to help educate the public about what is happening in the world, what is happening to our country, what is happening to this planet? Can we put a little more faith in them, and their words, and their studies, and their reports, and their works than we do these brainless politicians who are saying, “No, it’s because the environmental laws making al the water going into the Pacific Ocean.”

That’s not what’s happening. But it also shows us another thing, it shows us that Donald Trump, even after all the catastrophes of 2017 still doesn’t know how to respond to any kind of natural disaster when human beings, American citizens, are losing their lives. He is unfit to be president of the United States based on his responses to these disasters alone. You don’t even have to look for the 25th amendment or into any of the investigations. You want proof that Donald Trump is an illegitimate, unfit president? Just look at how he’s responded any time these climate related events have happened and American citizens have lost their lives.