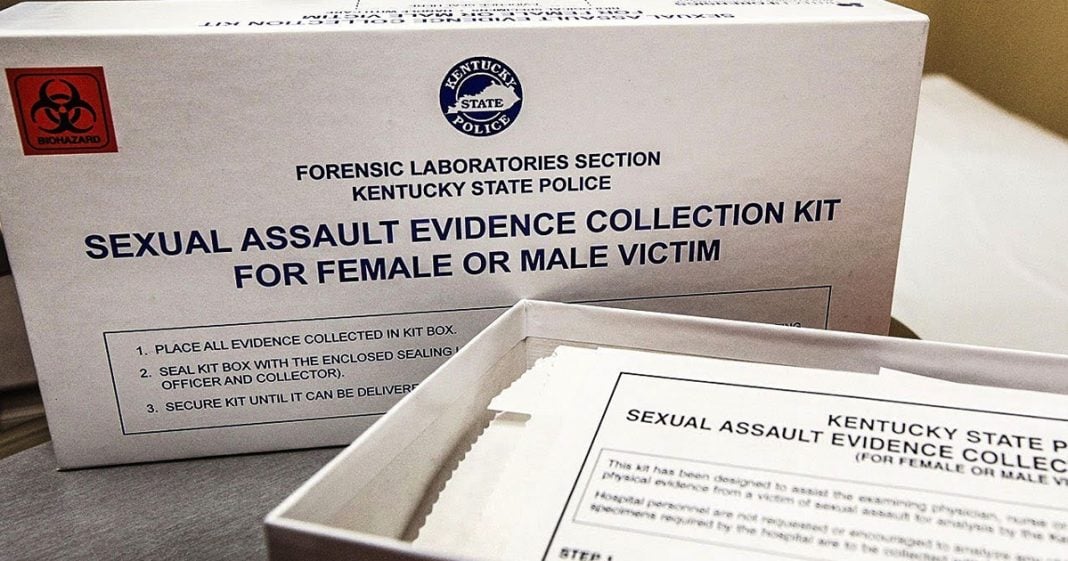 Ring of Fire’s Farron Cousins and Mollye Barrows discuss the issues involving the lack of interest from police, and a large number of unused rape kits.

Farron Cousins: About a year ago, the Governor of Oklahoma, Mary Fallin, issued an Executive Order in the State, telling authorities to find out just why exactly they have a backlog of thousands of unused rape kits. Now, Molly, this is not necessarily something that is unique to Oklahoma, but right now it looks like we’re only seeing Oklahoma finally start to say, we have thousands of rape kits. We have thousands of cases of rape.

Farron Cousins: These aren’t being used. What the heck is going on? And I’m glad Mary Fallin’s looking for answers, but there’s still too many questions.

Mollye Barrows: You’re exactly right. It seems like the more answers they find to these questions, they’re just coming up with more questions. One thing that’s certainly apparent is that testing evidence in rape cases has not been a priority for the State of Oklahoma. Like you said, I’m sure it’s a problem with other states as well.

But to have 7,000 untested rape kits, that adds to the trauma, I would imagine, for many of these victims. That’s not to assume that each and every one is gonna proven to be true, maybe there were some false allegations, but either way, those victims that really did experience a crime, they want to know the answer so that they can have some closure in their life and move forward.

The fact that they don’t have the funding and that they didn’t make it, there was no statute that dictated when they had to have these tests tested, if you will, within a certain amount of time, so they just languished and sat there. These cases went nowhere, and it certainly looks like no one takes rape allegations seriously and that’s not a good thing in this #metoo era.

Farron Cousins: Right. And you know women, very rarely, even after the #metoo thing, they don’t get the benefit of the doubt.

Farron Cousins: I mean, it’s always, she’s making it up. No, it was actually consensual. Oh, she was, you know, wearing something. There’s some kind of excuse in nearly every case. I constantly think of the Jameis Winston issue at FSU.

Farron Cousins: Oh, she just, he was a famous athlete. She knew he was gonna make money, so she came forward with these allegations, which actually happened before he was even on the football team.

Mollye Barrows: But the spin.

Farron Cousins: But before she even knew this guy was an athlete. So there’s always, whether it’s high profile or even low profile, police officers, as you and I have discussed on the show before, they don’t even want to talk about it. There was the one police station-

Farron Cousins: I forget where it was, but they had the Wall of Shame they called it, of women who made allegations that they decided were false. So they put their picture up on the wall so that women who came in to report something, that’s the first thing they’re greeted with.

Farron Cousins: With, if you’re lying or if we think you are, or if we don’t want to investigate it, we’re gonna shame you to Hell and back.

Mollye Barrows: Yeah. Put the burden of proof on the victim and you would think that hopefully in this discussion, this era where we’re talking about these kinds of cases now, that there would be this tendency to believe, and not in an unfair sort of way-

Mollye Barrows: … but just in a, hey, can we have a balanced sort of way, as opposed to your Wall of Shames or your attitude that these women did something to bring this on themselves.

But it’s interesting because this task force that was compiled, that Oklahoma ordered to take a look at these untested cases and kits, had a list showing the reasons why they weren’t tested, percentage-wise. What was interesting to me is the highest percentage was 32% listed as other, with no explanation offered as to why it wasn’t tested.

That’s concerning, and then they said 23% were a lack of victim cooperation. That bothers me, too, because to a certain extent, and I need to become more familiar with Oklahoma’s laws, but police do have, and prosecutors as well, from my understanding, at least a little bit of leeway in pursuing these cases, regardless of what the victim necessarily wants if they believe a crime has been committed. So it looks like it’s like they’re looking for an excuse.

Farron Cousins: Well, yeah, and a lot of times, too, they’ll make these women jump through obscene hoops. They treat them poorly, so if you go in there and you get shamed to the point-

Farron Cousins: … where you don’t, you know they don’t believe you, it is gonna make you less likely to cooperate, if that’s even the actual reason. I mean, cops don’t like to deal with this. Not all of them. Just like not all of them are gonna shoot an unarmed person, but there’s too many out there that do. There’s too many that want to shame these women-

Farron Cousins: … rather than help them. And these rape kits were basically designed to take that question mark away.

Farron Cousins: Is she real, is she not? Did this happen? That’s why we have these. That’s why you’re supposed to use them and the backlog in Oklahoma, 7,000 unused. At least they’re asking for answers but again, this is not unique to Arizona, this is … Oklahoma, excuse me. It’s something that can happen all over the country and it is.

Farron Cousins: I mean, rape kits are going untested all over the country.

Mollye Barrows: Well, and it’s interesting because they are gonna pursue legislative funding to get the rest of these, to get up to speed, caught up on all these tests that haven’t been tested yet, but it does make you wonder. They seem to be able to fund, state after state after state finds the money that they need to do whatever the popular or in-the-spotlight issue is of the moment. And good for the Governor, here, for at least making this a spotlight issue, for trying to get people on board with it. Hopefully it will encourage more women to come forward and report. Hopefully it will encourage prosecutors to pursue these cases and they are getting more agencies on board who will participate in this testing process as long as they get paid.

Farron Cousins: Yeah, absolutely. Well you know what? There’s actually some other good news this week that’s mixed in with a little bad news, and that is that on Wednesday, the plans, the blueprints for printable, 3D guns, were supposed to be released here in the United States. August 1st was when this Defense Distributed, this group was gonna unleash these blueprints. You can make everything from AR-15s to pistols, semi-automatics. Print ’em at home on your 3D printer. Untraceable, untrackable.

Farron Cousins: But luckily we had a judge with enough common sense to step in and say, yeah, we’re gonna prevent this. At least for now. They have until August 10th, I believe, but this is utter insanity.

Mollye Barrows: It is utter insanity. It makes me think that the NRA is somehow funding the software to make this happen, ’cause otherwise why would they want to let anybody dip into their pocketbooks for manufacturing these human being-killing weapons?

Farron Cousins: I know, and when you think about the reason we have gun laws and ID checks and serial numbers on guns is so that we can track who has what.

Farron Cousins: If it’s used in a crime, we can trace it back, get the ballistics, we know it came from this. When we change it to, oh, if you have a 3D printer, which consumer ones you can get for about a thousand dollars, well, imagine how much money you can make selling printed guns in a week? You can easily pay for a printer. This seems like something that criminals would absolutely love to get their hands on, because-

Farron Cousins: … they can fund however many printers they want, make these weapons, go out, sell ’em. They’re untraceable. You cannot trace them back to a dealer, to a shop, or even a human being.

Farron Cousins: And they can be used in crimes across the board.

Mollye Barrows: I know, and especially when it’s such a hot-button issue because of what happened with Parkland and obviously we’ve had any number of mass shootings in this country and the issue of guns and closing loopholes and how to test for, make sure that somebody doesn’t have mental illness, and that they’re following various state rules when it comes to who can buy a gun and who can’t, this takes it to a whole nother level and puts it in the realm of, again, regulating technology.

Here you have the State of Pennsylvania and other states trying to regulate this technology, and then you have these plans posted online so now people can access them for free. In some ways, and I know this dates me, but it harkens back to when online first started coming around, people were really utilizing it and they were worried about kids getting plans for bomb-making materials.