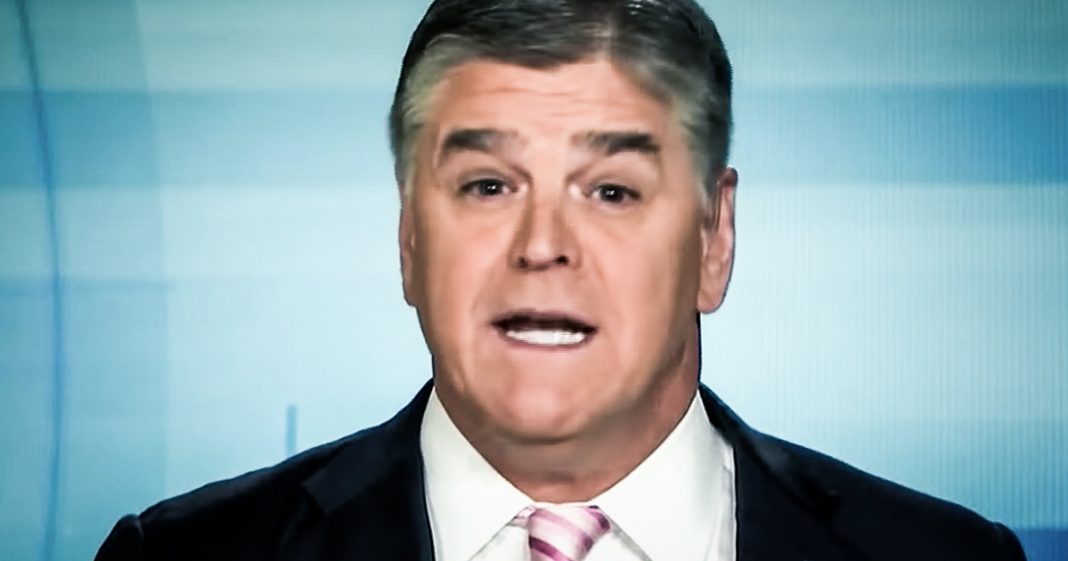 In a recent interview with Forbes magazine, Fox News host Sean Hannity said that he really likes the fact that no one really knows how much access he has to the President of the United States. Though he denied that the two are having nightly phone chats before bed, he didn’t rule out that he has virtually unlimited access to Donald Trump, a thought that should send shivers down the spines of true Americans. Ring of Fire’s Farron Cousins discusses this.

Sean Hannity really enjoys being friends with Donald Trump, but one thing he enjoys more than just being friends with the president is the fact that nobody knows how much access Sean Hannity actually has with him. That’s not me saying that. That’s literally what Sean Hannity said in a recent interview with Forbes. Sean Hannity said that it’s absolutely not true that he’s having pillow talk with the president every night, and that nobody really knows how much access he has, and that’s just the way he likes it. Let me read you a few exact quotes from Sean Hannity from that particular interview. Here it is. “I really kind of enjoy that nobody knows, and I’m just going to leave it that way, but I can tell you this, nobody has ever gotten my relationship with Donald Trump right ever.”

Okay, well we do know that you’ve gone to the White House and dined with him. We know that you’ve gone out golfing with him. We know that you have admitted that you guys do talk on the phone quite often, so what exactly has nobody gotten right about it? Is there more than that? Because we’ve only been able to report what we see with our eyes or hear with our ears, so obviously, according to you, if nobody’s gotten it right yet, then there must be a lot more shit going on than we know about. Here’s even more. “I read these things about me that are total bullshit. Quote it. It’s just not true.” Okay, so suddenly you’re an authority on the truth, a man who goes out there and unfortunately, for the month of July, had the highest cable news ratings out of anybody, and you lied to your audience every single night about all kinds of crazy and wacky things.

Oh, but don’t worry. He addressed that too, said, “The amount of time I spend caring about it is zero. I don’t care,” and that was when he was asked if whether or not he’s mad that people say that he’s propping up Trump and spreading conspiracy theories. “I try to be the most informed person I can be. We work really hard at getting things right, and I don’t mind being separate and apart from everybody else at all. In fact, I kind of relish it.” Okay, you don’t mind being apart from everybody else. By everybody else do you mean the people that are actually out there not reporting conspiracy theories, or the people who are calling out your lies, or the people who are reporting the truth?

Those are the people that you are apart from, so I don’t know what other groups that you were talking about, and if you relish the fact that you are spreading conspiracy theories and propping up your buddy in the White House, who nobody knows how much access you have to him, then guess what? You’re Alex Jones, and considering the fact that Alex Jones is going through quite a few legal problems at the moment, losing a ton of money, you may actually be able to take his place over at Infowars if you so choose. That might be the perfect transition for you, because your cable news show has gone from just spreading lies and misinformation to being an outright conspiracy theorist’s dream come true.

It’s all, all of it, so that you can prop up Donald Trump, deny that reality exists, and convince your somehow growing audience that everything you say is the truth, and that everything everyone else says, no matter where they’re from, is an absolute lie. You don’t have an audience. You have a cult following, and that makes you a very dangerous individual who also happens to have huge connections to another very dangerous cult leader by the name of Donald Trump.