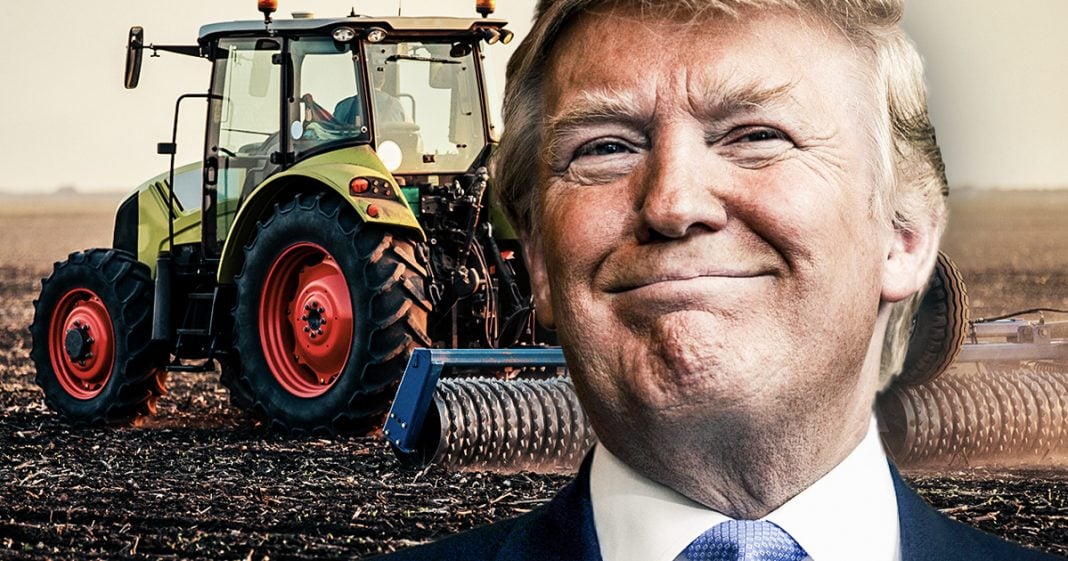 During a recent panel discussion on CBS, multiple farmers that have been hurt by Trump’s tariffs say that they are willing to let themselves die in defense of the President’s horrible trade practices. This is what a cult looks like – the leader is all-knowing and all-powerful, and the foot soldiers are willing to go to the grave in order to defend them. Ring of Fire’s Farron Cousins discusses this.

In a rather disgusting, panel discussion that CBS aired on Saturday evening, they spoke to four different Trump supporting soy bean farmers in the United States and every single one of them had the same thing to say. They said that they are willing to die. To give up their entire economic livelihoods to support Donald Trump’s disastrous trade wars.

Now all four of these farmers also admitted that they are losing a lot of money. Their lives are going down the toilet right now and they acknowledge that yeah it’s because of what Donald Trump is doing. But they still, and literally said they will suffer to the death, to the death, just to support, continue supporting Donald Trump. We have moved past politics. That is not what this is at all. This is a cult. The people in that interview, the people who said these things are absolutely suffering from some kind of delusion and they need to be in padded cells under observation because that’s not normal.

A normally functioning human brain would not say something like that. Maybe if it was your own kid, maybe. Or your spouse. But some dude you’ve never met that’s ruining your life for his own personal benefit. For you to say you’re willing to die for these policies. You’re psychotic. You’re sociopathic. You need to be locked away from normal members of society before you hurt them or you hurt yourself or both because that’s not normal. But again, we’ve moved past politics at this point. This is a cult.

The people who continue to support Donald Trump and say that they will suffer as long as they have to because they love him so much. That is cult like behavior. The leader of the cult, Donald Trump, as in every other cult that we have seen, they can do no wrong in the eyes of their followers. Everything they say is accurate. Everything they ask these followers to do is within reason and the followers will do these things no matter what to gain favor with the leader and that is what we are seeing right now with some of these farmers.

There’s plenty of others out there though who have had their lives destroyed by these trade wars who are not willing to, toe the line, as one of these soy bean farmers said the other day they were going to do. They’re not doing that, they admit they were swindled. Some of them have said they “were tricked by the devil” when voting for Donald Trump. So it’s not all of them. It’s not even most of them. But this handful of crazy people which is exactly what they are if this is what they believe. This handful of crazy people are dangerous. Not just because of their cult like obsession with Donald Trump, but because of the fact that they are willing to do whatever it takes to support this man.

These are the kinds of people who go out and commit atrocities against other human beings, all to gain the favor of that cult leader Donald Trump. I think it’s time that the media stop talking to these Trump supporters. The people who support him now are always going to support him. The ones who have stopped supporting him are the ones who are not going through life with blinders on. But you never see the media talking to those people. They always go find the oldest, whitest people they can in a diner or out on a farm and they say, “Hell yeah, I’m gonna keep loving Trump, why not? Even though I’ve lost everything that I’ve worked my entire life for. Or that my family built for generations, but yeah, I’m such an idiot I’m going to keep supporting the man who’s ruined my life, my wife’s life, the life of my children and the life of anyone I’ve ever come in contact with.” Those aren’t the people the media should be talking to. The media should be talking to the people who realize the mistakes that they made and are willing to do whatever it takes to make it better.