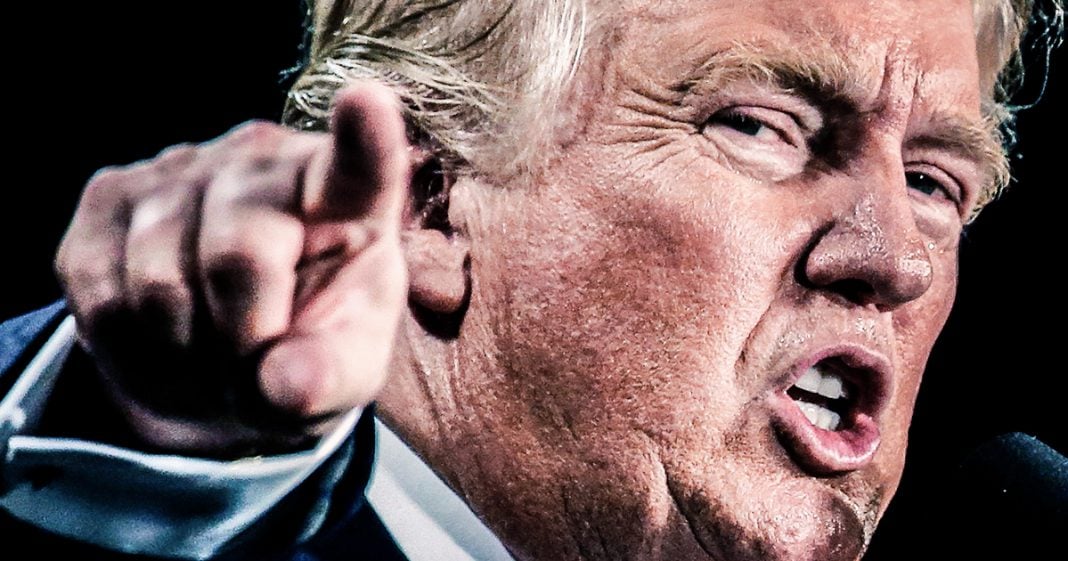 According to a new report by Vanity Fair, Donald Trump’s online tirades against everything under the sun have to do with the fact that he’s constantly mad that being president isn’t as fun as he thought it would be. The reporter spoke to current and former aides to both Trump and other members of Congress that have had to rein Trump in on some issues, so they know first-hand what is going on. Ring of Fire’s Farron Cousins discusses this.

Donald Trump is angry. Donald Trump is always angry. He’s kinda like the Incredible Hulk without any discernible powers, and certainly not the intellect that Bruce Banner himself walks around with when he’s not the Hulk. But, unlike Bruce Banner, Donald Trump doesn’t turn into a big green monster, he just gets on Twitter and vents his rage that way. That’s his therapy.

A recent report in Vanity Fair, by Gabriel Sherman, says that, “One of the reasons Donald Trump is so angry is because, being president isn’t as fun as he thought it would be.” Now, Gabriel Sherman based this off what he was told by Republican insiders, both in the White House, and members who work for members of Congress, like Paul Ryan and Mitch McConnell. They have been present at meetings between Paul Ryan, McConnell and Trump. They’ve said that both Ryan and McConnell, and several other Republicans tried to warn him, that his family’s separation policy was going to backfire on him in a huge way. But, he didn’t listen and he did it anyway.

They tried to warn him that his meeting with North Korea wasn’t gonna go the way he thought it was, but he went ahead and did it anyway. So now, these Republicans who were present at these meetings and many others, are saying that Trump is mad, one, that he’s not getting enough credit for the economy. Two, that he’s not getting enough credit for North Korea, which we found out earlier this week, they’re still developing, and pointing nuclear weapons at the United States. And, three, and most importantly, that being president isn’t as fun as he thought it would be.

Here’s a direct quote from that article. I have to read this. “He was very unhappy”, a Republican who spoke with Trump said, “He was perturbed the immigration issue had gotten outta hand. He’s feeling that being president isn’t as fun as it should be. He thinks he’s not getting the credit he deserves about the economy and North Korea. And these people around me, don’t know how to sell.” Is what Donald Trump says. They don’t know how to sell. They don’t know how to go out there put a positive spin on these horrible things he’s doing and sell it to the public.

Look, there’s only so many ways you can dress up a turd, without people realizing that, “Hey. That’s still a turd.” And that’s pretty much what all of your policies have been. And I’m sorry that being president isn’t fun enough for you, that spending more than 100 days over the last 18 months playing golf, isn’t your definition of fun. But, being president is never supposed to be fun. Did you ever hear Barack Obama complaining that things weren’t fun? Did you ever hear, well, probably did hear it from George W. Bush, but think about H. W. Bush, or even Regan, complaining about it not being fun. No. Because those guys, regardless of whether it was good or bad, had actual work to do.

We all know Bill Clinton still managed to have some fun in the White House. Fun that got him impeached. But, none the less, Donald Trump is a whiny, crying, child, who’s mad that he has to sit down and do his homework before he can go outside and play. And millions of people who understood that he was like this, still looked at him in November 2016, and said, “Yep. That’s my guy.” And this is what you get. You get a man who doesn’t wanna do the job, he doesn’t wanna put in the hours. He wants to spend every morning as executive time, watching Fox News, so they can tell him what to do that day, and then, bitch and moan, when he’s not having enough fun, because people don’t wanna polish and sell his horrible policies.

I mean, I can’t even keep track of the ways in which this man is incompetent anymore because they’re just becoming too numerous to count. But we do know, without a doubt, that Donald Trump is 100% incompetent and that he was never cut out to be the president of the United States.