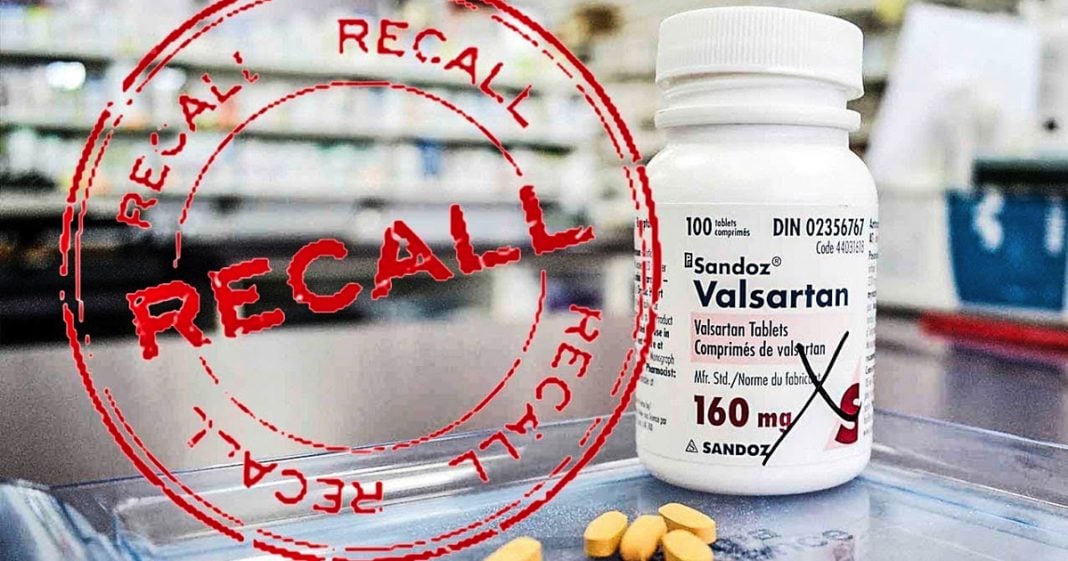 Popular brands of blood pressure and heart medications containing Valsartan have been recalled due to the fact that the Valsartan in the drugs has been contaminated with a known carcinogen called NDMA. Between the failures of the drug companies involved and the regulatory agencies, this dangerous chemical has already found its way into countless patients across the globe. Ring of Fire’s Farron Cousins discusses the dangers of this medication.

A major medicine recall was recently undertaken by the US FDA as well as 22 other countries across the planet. This recall involved a drug called Valsartan. Now Valsartan is a medication used for blood pressure and heart treatments and what has happened is that during the manufacturing process of this over in China, it’s been contaminated with a cancer causing substance that’s called N-Nitrosodimethylamine, NDMA for short. This chemical is a known cancer causing agent. Even our own FDA, with as dysfunctional as they are, said this is a probably human carcinogen … Excuse me, the EPA called it a probably human carcinogen. This is a very real problem. Thousands of people in the United States alone are taking this medication. And this, unfortunately, is a voluntary recall, meaning, if you want to go turn in your contaminated medicine, you can. If you don’t? Okay. It’s not mandatory.

What gets even worse is the fact that our FDA here, when responding to this Valsartan story and recall and the fact that it contained a cancer causing agent that also, by the way, can destroy your liver, other countries, 22 other countries, had already taken action on it. Here is a quick excerpt from a CNN article talking about this.

The FDA action came after 22 other countries issued recalls involving 2,300 Valsartan batches sent to Germany, Norway, Finland, Sweden, Hungary, The Netherlands, Austria, Ireland, Bulgaria, Italy, Spain, Portugal, Belgium, France, Poland, Croatia, Lithuania, Greece, Canada, Bosnia, and Hercegovina, [inaudible 00:02:04] and Malta. Now, the US recalls left some patients who take Valsartan containing drugs, scratching their heads over what to do about treatment regimens. Because that’s the other problem. We know they contain this, this cancer causing agent, the Valsartan, but because of what this medication does for patients, blood pressure, heart medication, they can’t stop taking it until they go see their doctor and either get approved to come off it or get a prescription for something else.

So not only do these people now know that they’re taking the medication that could easily give them cancer or severely damage their liver, causing fibrosis or several other liver conditions here, tumors on the lungs, they have to keep taking it until they go see their doctor because the risks of stopping it suddenly are too great.

So, once again, we have a failure from the companies here that are involved, major pharmaceuticals, Solco Healthcare and Teva Pharmaceuticals Industries, major failure on their part to catch the fact that this chemical had contaminated these batches of heart medications but now the people who understand the risks still have to try to get an appointment, go speak with a doctor and make sure it’s okay for them to be switched to a different medication and, in some cases, it may not be. So they would be stuck taking this medication that they know causes cancer or liver damage or tumors all over the body.

This is, yet again, another failure of both our regulatory agencies who, again, ours only jumped on this after 22 other countries came forward and said, “We’re gonna do something about this.” Finally, the USA FDA said, “Okay, we’ll do something too.” But more importantly, it’s another failure from big pharma. They ship production overseas, they let this drug be made over there so they don’t have to worry with it. Maybe not face our regulators. This is a generic drug so there’s far less scrutiny. They bring it back over here, don’t pay attention to the fact that it’s contaminated. They let people get cancer because of the chemicals inside of it and nothing happens to ’em. That’s the worst part. Nothing happens to them. Nothing happens to these pharmaceutical companies. They don’t go to jail. They don’t get pinged. They’ve already made a ton of money off it so whatever happens, fines, lawsuits, they’re still gonna end up making a profit.

The only thing we can do, this point, is make sure that that profit is a lot lower than it should be so that they know destruction of human lives isn’t worth it and the only way we can do that, like so many other things in this country, is through the court system. Because we can’t depend on companies to do the right thing. We can’t depend on the regulatory agencies to catch these things and we can’t depend on the politicians to do anything about the problem. The only group left still fighting for these patients, fighting for the injured people, are the trial lawyers.

Here’s another thing. I gotta circle back to Donald Trump, real quick. ‘Cause this story is just absolutely outrageous. Politico ran an article earlier this week basically commemorating the one year anniversary of General John Kelly becoming Donald Trump’s Chief of Staff. But also, to make a few points about how ineffective John Kelly has been since joining the Trump Administration. And that’s something we all knew. Right? We were promised John Kelly was gonna come in a year ago, he was gonna be the adult in the room, the Tweets were gonna stop or at least cut back a little. The Fox News watching was gonna stop. None of that happened.

And so John Kelly, by every possible measure, has been an abject failure with his role as Donald Trump’s Chief of Staff. But according to this Politico article, talking to staffers inside the White House, not only has Kelly been ineffective, but he’s given up. He doesn’t care anymore. He knows he can’t control Donald Trump. He can’t change his behavior. He can’t even direct him on how to run his White House because there is actually a more powerful advisor speaking to Donald Trump every day. And they’re the ones calling the shot. That advisor happens to be Fox News. And I’m not saying that in hyperbole, I’m saying that is what the staffers at the White House are telling us because Donald Trump, in the evening, speaks to Sean Hannity on the telephone. And Hannity directs what Trump should say or do about any specific issue.

And then, in the morning, again, according to White House staffers, Trump watches Fox and Friends. That show ends, he comes out, he comes down and he dictates what meetings they will have that day on what issues, based on what Fox and Friends talks about that morning. Fox News is officially dictating the agenda for the president of the United States and, therefore, for the entire country of the United States. Fox News is calling the shots. And if that doesn’t terrify you, then you’re not familiar with the history of Fox News. This hate mongering network that spews lies all day long, they’re the ones who have the president’s ears. And if they have a specific agenda they wanna push, which they do, they know that all they have to do is tell Sean Hannity to mention it in his phone call or have those idiots at Fox and Friends talk about it in the morning and soon enough, it’ll be on the president’s official agenda.