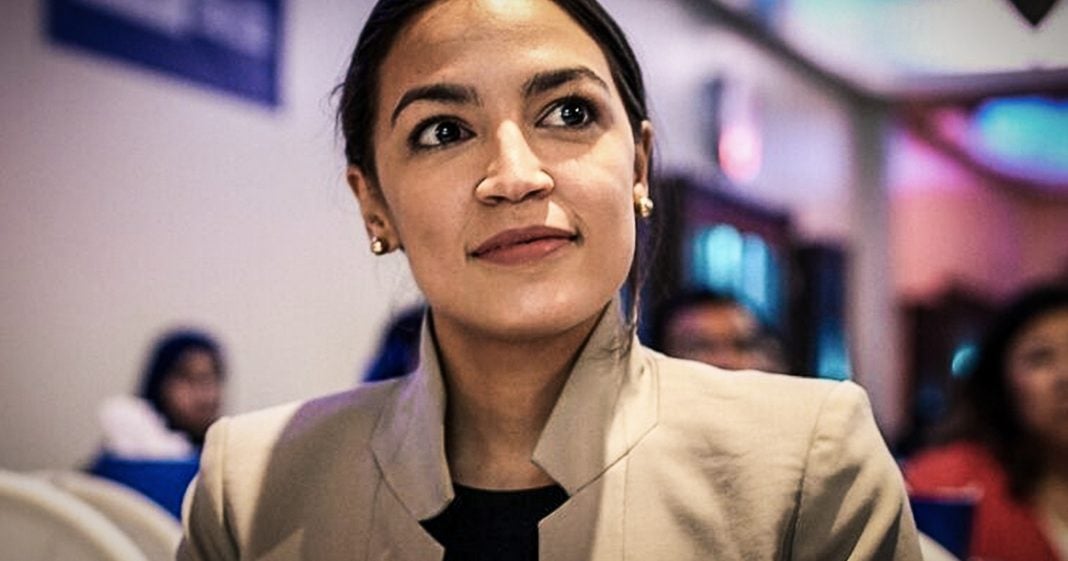 The victory of Alexandria Ocasio-Cortez over 20-year Democratic veteran Joe Crowley not long ago sent the establishment at the DNC into disarray. They didn’t know what to make of this newcomer who was challenging the status quo, and since her victory they have been trying to downplay what it could mean. Maybe it means a change is coming, maybe it was a fluke (unlikely), but at the very least it shows that the establishment wing of the Democratic Party is just as afraid of change as Republicans are, and that gives us all the more reason to force them to change, as Ring of Fire’s Farron Cousins explains.

Alexandria Ocasio-Cortez has been traveling across the country over the last two weeks trying to help and bring organization to other progressive candidates who are running in the primaries for this year’s mid term elections. Along the way, she’s been joined by Bernie Sanders. She’s been joined by Zephyr Teachout in New York. Everybody who cares about progressive politics is out there with her and they’re talking to people, and they’re organizing, and they’re strategizing, and they’re holding rallies where average people can come up and voice their concerns about American politics. And more importantly, she’s doing this in the Midwest. Why is that important? Well because those, I almost called them Republicans, what a Freudian slip there. Those democrats, the establishment ones, who said, “Well yeah she can win in the Bronx, but she couldn’t win in the Midwest”, well guess what? She’s going through the Midwest drawing huge crowds, getting people energized, supporting other progressive candidates, and they’re basically winning in the Midwest.

Now, here’s why I bring up that story. Because the establishment of the Democratic party fears change just as much as the Republic party fears change. Now that’s been a talking point for the Republican’s or people attacking the Republican’s for a long time, for decades. Republicans are afraid of change. They don’t like anything to be different. That’s why some of their policies are still stuck back in the 50’s, and I’m not talking 1950’s, based on what we’ve seen from Trump, we’re actually talking 1850’s at this point. But nonetheless, they don’t like things to be different. And now, we can say the same about some of those hard core life long, establishment type, corporate centrist, Democrats. They don’t want these progressives like Cortez, like Elsie, like anybody else out there running for office. They don’t want them to come through the ranks now. Why? Because it shows and proves that they’ve been wrong about everything. They didn’t think Ocasio-Cortez could win in New York. So, when she did they had to say, “Okay well in New York, but now you can’t win in the Midwest”, and now they’re winning in the Midwest. So, now they don’t know what to think. They don’t want to admit they were wrong because they don’t want to have to change.

But, during the time that Barack Obama was President, the Democratic party lost over 1,000 seats at the federal and state levels. State houses that were for Democrats, flipped to Republicans. Democrats lost more power under Barack Obama than at any point in modern history. So, yes, something has to change. You can not keep doing the same thing and expect different results, but that’s what the establishment wants to do. That’s what the centrists wants to do, the third way group wants to do. They want to keep things the way they are while ignoring the fact that the public is crying for something else. Poll after poll after poll has shown that regardless of political party affiliation, the majority of people in this country want Medicare for all. They want action on the environment to clean it up. They want money out of politics. They want debt free college. And, right now there isn’t a single political party that has embraced those things as their platform. The progressives who are running, as Democrats, or Democratic Socialists, or just as Democrats, I think they’ve actually adopted those things as their platform to be honest. But, they care about those things, and they’re running on those things, and that’s why they’re winning.

The democratic party doesn’t want to change who they are. They don’t want to give up that corporate money, and if you don’t, you’re going to see all of these moderate Republicans who hate Trump, but still want the corporate money, they’re going to move into the Democratic party. The Republicans will move further right. The Democrats will become the new right, and the only thing left on the left is going to be these progressives. And to be honest, I’m fine with that. I would love a left that truly was progressive, but I guess what I’m saying now is that the Democratic party, the establishment, they have a choice. You can join us or you can become the new Republican party. There’s only one of those that’s going to work pretty well for you considering what the polls are saying about what people want. So, I suggest to all of the establishment folk out there, you choose very wisely.