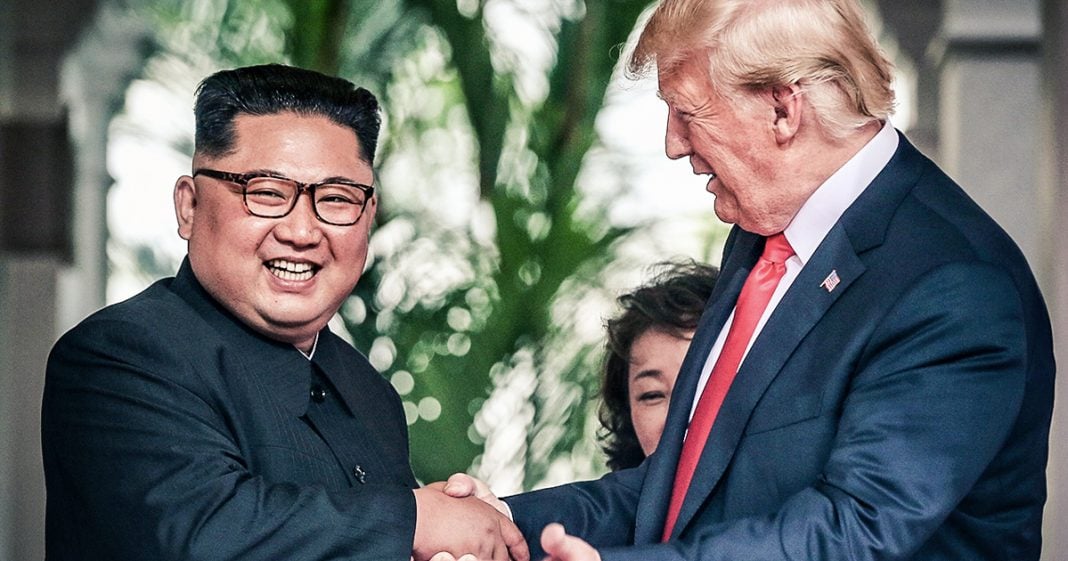 Intelligence officials are warning the US that North Korea is not only STILL working on creating new intercontinental ballistic missiles, but that the new missiles are currently being pointed at the United States. In spite of these warnings and all of the evidence to support it, Donald Trump refuses to acknowledge what is happening, likely because it would mean that his talks were as unsuccessful as everyone predicted. He did, however, take the time on Twitter to thank Kim Jong Un for sending him “a nice letter.” Ring of Fire’s Farron Cousins discusses this.

Both President Trump and Vice President Mike Pence have been talking a lot this week about how great North Korea is because they’re starting to send back the alleged remains of fallen U.S. soldiers from the Korean war. And I say alleged because tests have to be run on these remains to make sure that they are, in fact, American soldiers or even Americans to begin with. As of right now, we technically have no idea whose remains these are.

But nonetheless, they’re praising him. Donald Trump tweeted out the following on Thursday. He said, “Thank you to Chairman Kim Jong-un for keeping your word and starting the process of sending home the remains of our great and beloved missing fallen. I am not at all surprised you took this kind of action. Also, thank you for your nice letter. I look forward to seeing you soon.”

A couple years ago, when my son was in first grade, they had to write letters asking politicians a question at our state government here in Tallahassee. And my son got a response back and then, everybody had to respond and he said in his response, a first grader, said, “Thank you for your nice letter. I hope I get to see you soon.” So, when I read Trump’s tweet there, I realized that he is using the same language and mentality that my son who, when he was a first grader, was using. Thank you for your nice letter, sir. I hope we meet again soon.

Alright, the reason I’m even talking about this story today is not because of the remains. It’s because of that phrase. Thank you for your nice letter. Do you know what else we found out? Actually, the day before Donald Trump tweeted that. We found out that North Korea has not only not stopped missile production. They’ve ramped up missile production and, according to the latest assessments, those intercontinental ballistic missiles are actually pointed at the United States right now.

Did Donald Trump mention that in that tweet? Did I miss something there? Was there coded language in thank you for the nice letter? Does that somehow mean in political speak don’t point your friggin’ missiles at the United States? Or does Donald Trump just not care enough about the public to admit that his meeting was a failure? Yes, it’s great that we’re getting these remains back and I hope that they are fallen U.S. soldiers, but given the fact that Kim Jong-un has lied about everything else he was allegedly gonna do, and not just to Donald Trump, but to every President before him, just like his father before him did, I have no reason to believe that these are the U.S. soldiers. Hopefully, they are. But until we get the tests back, you cannot say for certain.

But, what’s more important, again, is the fact that North Korea is pointing missiles at the United States and the President of the United States doesn’t seem to care about it. Instead, he wants to continue to lavish praise on this psychopath overseas by saying, “Oh, well, thank you for your nice letter. I hope we can be pen pals now.” That’s not how diplomacy works. That’s not how foreign relation works.

Now, I’m not saying I want a war with North Korea. I don’t ever want a war with anyone for any reason. Let’s get that out of the way right now before I get some of the hardcore folks saying like, “You’re just drumming up war like the needle lips.” No. Shut up. You’re an idiot. What I want is a strong leader who knows how to handle people like this, who knows to not fall for their empty promises and who’s smart enough to not fawn all over them on Twitter. That is what we need. That is what most of us want. And that leader sure as hell isn’t Donald Trump.