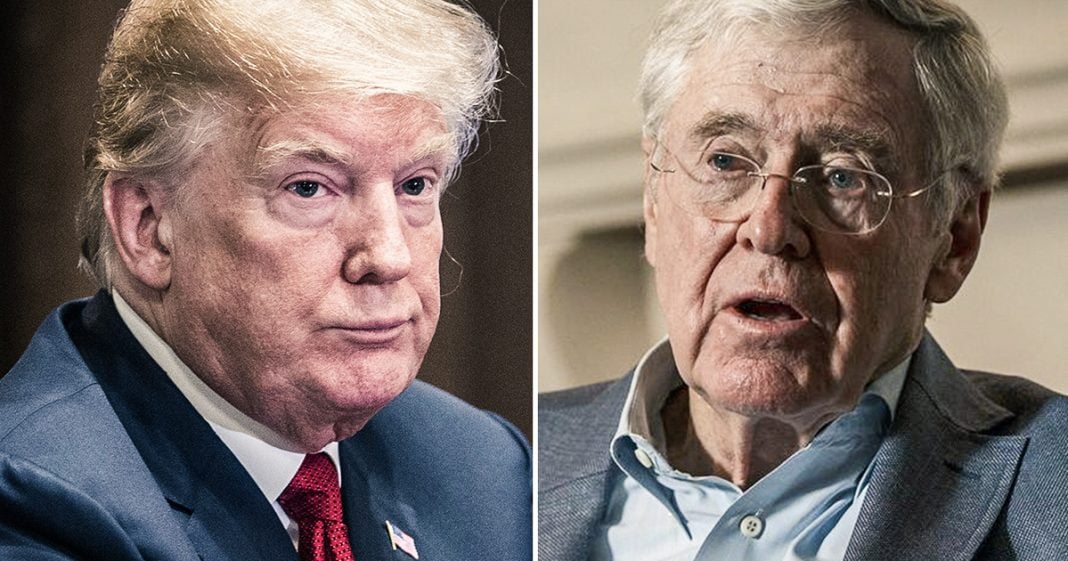 Republican lawmakers in DC are voicing their concerns about the tension building between Donald Trump and the Koch Brothers, with the latter saying that they may start scaling back their donations to the GOP. Republicans want that money, but they don’t want to deal with Trump’s anger, so they are caught between a rock and a hard place – a situation that they can only blame on themselves, as Ring of Fire’s Farron Cousins explains.

And if your not familiar with it, the Koch Brothers held their annual retreat last weekend where they said, “Donald Trump is very divisive and we don’t like his spending policies.” That might be one of the nicest criticisms of the President I think I’ve eve heard. But it set off a nerve with Donald Trump, he got on Twitter started attacking them as ineffective, nice guys, but policies he says.

Do you see how insane that sounds? But that is actually what the RNC had to tell their donors. Not, “Hey we’re going to work on a plan to get more people in the United States healthcare.” Or, “Hey what do you think about debt free college because we’re kind of leaning towards going that way?” No, no, no. It was they insulted our guy who as you know, we also don’t like, but we don’t want to face his wrath. So don’t talk to these guys who funded our party for more than a decade. And I guess that makes sense some how.

The Koch Brothers absolutely deserve everything that is happening to them. I hope they get ostracized from the entire Republican community. But again, Republican lawmakers, not talking about the party itself or the President or the donors, the lawmakers are terrified right now. Because they’re stuck between a rock and hard place of their own design. They want the Koch Brothers money, especially with midterms right around the corner. But they also don’t want to piss of Donald Trump and have him tweet horrible things about them, especially with midterms right around the corner. There is nothing they can do to appease both sides. And so, since the RNC decided to step in and make the fight so much worse nobody knows what to do in the entire Republican party loses.

But when the Republican party loses that means the American public wins. The Koch Brothers aren’t out there funding politician who want to make your workplace safer, or who want to clean up the environment. They’re funding politicians that quite literally want to do the opposite of those things I just said. So if they’re giving less money to these politicians, and these politicians now have less likelihood of winning their election, that’s good for the American public. And if the Koch Brothers decide that they’re just done funding Republicans altogether, fantastic. It gets more corporate dirty money out of our political system. And that is what is needed right now.

So I welcome this fight. I enjoy it. I’m having fun watching from the sidelines as Republican billionaires turn themselves out and tear each other apart trying to fight for what’s left of the disgusting soul of the Republican party.