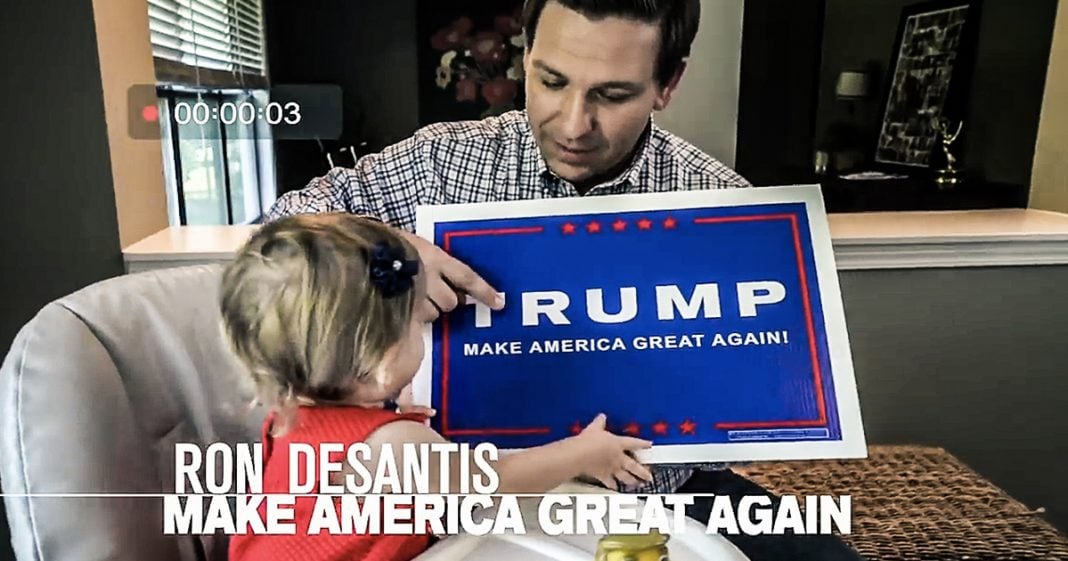 Republican candidate for Florida governor Ron DeSantis is a die-hard Trump supporter, and he wants to make absolutely sure that everyone on earth knows it. He’s so much of a Trump-lover that his new ad just features him creepily indoctrinating his own child into the same cult-like worship of Trump that DeSantis shows each day. Ring of Fire’s Farron Cousins discusses this.

In the era of Trump it seems that some republicans, the ones who still cling to him, are trying to out trump their opponents by saying they love Trump more than the next guy. And nobody has better, and unfortunately more creepily than republican Florida governor candidate, governor wannabe, Ron DeSantis.

Take a look at DeSantis’s creepy new ad where attempts to indoctrinate his young child into the ways of Trumpism.

Casey DeSantis: People say Ron’s all trump, but he is so much more.

Casey DeSantis: I just thought you should know.

Voice Over: Ron DeSantis for governor.

Wow. All right, there are so many things just plan creepy about this video. But, to me, one of the creepiest things is not what he is doing to that child. Because they don’t honestly believe that this man goes home and does all those things with his child. I do, however, find it insanely creepy that he had his wife, who was a former newscaster in South Florida, come on there and try to act all cute and funny, and you say these thing, and then they were doing something else in the clip. That’s what is cringe worthy, to me, is any time republicans try to do something funny, but it just comes off as insanely creepy, like when Ted Cruz did the video doing all of his little Simpsons impressions. Tried to be fun and hip, and cute with the public, and he just ended up looking like a real crazy person. And that is exactly what Ron DeSantis has done with this ad.

But, he thinks it’s gonna play well. He thinks that’s going to work in the state of Florida, that yes, went for Trump, but didn’t go for Trump by huge margins. And, as a bit of anecdotal evidence, I can promise you as somebody who has lived in the state of Florida for almost all of my life, I have seen very few Trump bumper stickers and yard signs, especially when compared to the number of Romney, McCain and W stickers that I still see on vehicles today. Those Trump stickers do not show up on a daily basis even, but I can’t drive five miles without running into Romney, McCain, or W sticker.

So, that kind of tells you something. Yeah, they voted for Trump, but this isn’t exactly a place that’s all in for Donald Trump like Alabama, or possibly even Mississippi. So, I think he’s over playing his hand here politically. More importantly, to the real issue here, Ron DeSantis, a tea party republican is trying to be the next governor of Florida after eight years of Rick Scott, a man who probably should have ended up in prison rather than the governor’s mansion in our state in Tallahassee. But instead, he plead the fifth more than 75 times, didn’t have to face any charges. His company ripped Medicare off, or Medicaid for more than one billion dollars, and then he became governor.

So, we have had eight years of a borderline criminal, crazy governor who’s creepy, both with his policies and with his appearance. I don’t think we need four years of another creepy guy, like Ron DeSantis, trying to continue to run our state into the ground.

Florida is basically a national laughing stock at this point, and we need a governor who’s not gonna put out these creepy, cringe worthy adds indoctrinating his own child. We need somebody that’s gonna turn the state around. Maybe, just maybe, protect the coastlines from things like oil spills and climate change, and turn Florida’s reputation around so that we’re not the laughing stock of the rest of the country.

Ron DeSantis isn’t the guy who’s gonna do that.