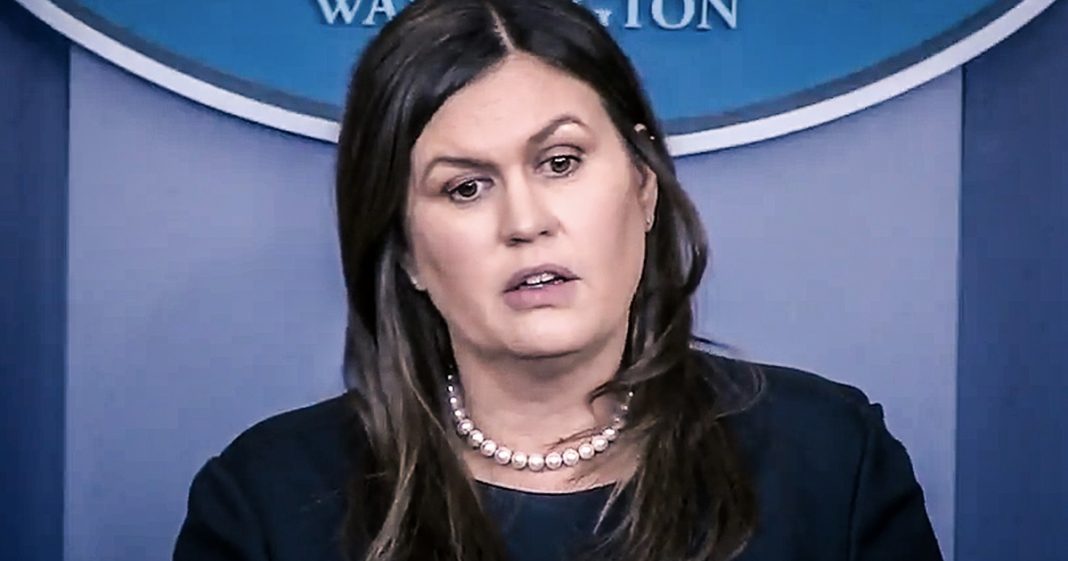 During Thursday’s White House press briefing, Sarah Huckabee Sanders was asked by CNN’s Jim Acosta whether she would be willing to admit that the press is NOT the enemy of the people, a claim that Trump loves to make. Rather than saying she disagreed with the President, she went on a rant about how horribly she allegedly gets treated while her voice was quivering and she was obviously holding back tears. Ring of Fire’s Farron Cousins discusses this.

For the entire month of July, Sarah Huckabee Sanders held … I think it was only three press briefings on camera during the entire month of July. So for the month of August, I guess she’s back at it. She’s going out there every day trying her best to continue to lie to us and act like it’s not getting to her. And I say, “act like it’s not getting to her” because by now, I’m sure we’ve all heard about the interaction that happened on Thursday during the press brief in between CNN’s Jim Acosta and Sarah Huckabee Sanders. Acosta wanted her to refute Donald Trump’s claims that the press is not the enemy of the people, something Ivanka Trump actually did earlier that day, Sarah Huckabee Sanders wouldn’t do it. Take a look at the interaction here, and you’ll notice something about Sarah Huckabee Sanders. You have to listen beyond her words. Here it is.

Sarah: I think the president has made his position known. I also think it’s ironic-

Jim: But would you mind telling us, Sarah-

Sarah: I’m trying to answer your question. I politely waited. And I even called on you, despite the fact that you interrupted me while calling on your colleague.

Jim: Which is why I interrupted.

Jim: But if you would not mind letting me having a follow-up, that would be fine, but it-

Sarah: It’s ironic, Jim, that not only you and the media attack the president for his rhetoric when they frequently lower the level of conversation in this country. Repeatedly, the media resorts to personal attacks without any content other than to insight anger. The media has attacked me personally on a number of occasions, including your own network, said I should be harassed as a life senate, that I should be choked. ICE officials were not welcome in their place of worship and personal information is shared on the Internet. When I was hosted by the Correspondents’ Association, of which almost all of you are members of, you brought a comedian up to attack my appearance and call me a traitor to my own gender. In fact, as far as I know, I’m the first press secretary in the history of the United States that’s required secret service protection.

Jim: Tell that to the five dead people of Indianapolis.

Sarah: The media continues to ratchet up the verbal assault against the president and everyone in this administration. And certainly, we have a role to play, but the media has a role to play for the discourse in this country as well.

Jim: If you don’t mind … If I may follow-up … Excuse me. You did not say in the course of those remarks that you just made, that the press is not the enemy of the people. Are we to take it from what you just said … We all get put through the ringer, we all get put in the meat grinder in this town, and you’re no exception. And I’m sorry that happened to do. I wish that had not happened. But for the sake of this room, the people who are in this room, this democracy, this country, all the people around the world are watching what you’re saying, Sarah. And the White House for the United States of America, the president of the United States should not refer to us as the enemy of the people. His own daughter acknowledges that. And all I’m asking you to do, Sarah, is to acknowledge that right now and right here.

Sarah: I appreciate your passion. I share it. I’ve addressed this question. I’ve addressed my personal feelings. I’m here to speak on behalf of the president. He’s made his comments clear.

Okay, I’m gonna get to what she said in a moment, but let’s focus first on how she said it. You can clearly hear in her voice right there that she is about to cry. This job has broken her, and she has hit her tipping point. This is only the second time since she has been press secretary that there has been visible, audible evidence that this woman was about to lose it at the podium. The other time was when the small child asked her about school safety and gun control.

There, right there, she was 100% about to start crying. And that is why she started going on the offensive. She started attacking Acosta. She started attacking CNN. She went through her list, read her list because she had it written out. God only knows how long she’s been carrying it around, but she was ready to go through that list of perceived grievances that she has against some of the members of the press there. She did not address Acosta’s question. She did not address the fact that CNN reporters were essentially shouted down, cursed out, given the finger at Trump’s rally the other night.

The press is the victim in this instance, Sarah, not you. You have fostered many of the ill wills that the public has towards them, you and your boss. So you want to sit there and read your little list of grievances, things that make you so sad you almost cry, go ahead, but nobody cares. You are a horrible human being. Your only job seems to be to go out there and lie to the press every day. And even though you’re the one doing the lying, you have the audacity to call them fake news and say that they are the enemies? You, Sarah, are the enemy here.

The press deserves better. And the press, if they had any sense, and I know corporate sponsors and corporate leaders won’t let them do this, but if they had a little bit of sense, they would band together and just say, “You know what? Screw it. We’re not going to attend another one of these disgusting press briefings with this disgusting woman. But if you get rid of her, maybe we’ll start coming back. But until then, have fun with all of the press and publicity that’s gonna be coming your way because none of it is going to put you, Mr. Trump, in a positive light.”

If the press had any scruples here, that is what they would be doing. But instead, they’re gonna keep showing up at these press briefings, keep getting cracked on by Sarah Huckabee Sanders, and then have the audacity to themselves get on Twitter and whine about them being the victims. You have a choice. Everybody in that room has a choice. And I do feel for the press here. And I believe in this particular instance, they were the victims. But if you keep putting yourself in that situation without properly fighting back or just saying, “I’m done”, then at some point, it becomes even harder to feel some sympathy for you.

But Sarah Huckabee Sanders, that’s why I have no sympathy left for her. She could have started bawling in the middle of her little tirade there, and I would have felt nothing. And I’m the kind of person that usually has empathy for everyone regardless of political affiliation or anything that it doesn’t affect me. The fact that they’re a human being, and they’re in trouble and need, that gets to me. But Sarah Huckabee Sanders had ruined that for me, for her, so I don’t care if she bursts into tears. What she has done to this country is far worse than her not getting to eat a meal at a restaurant.