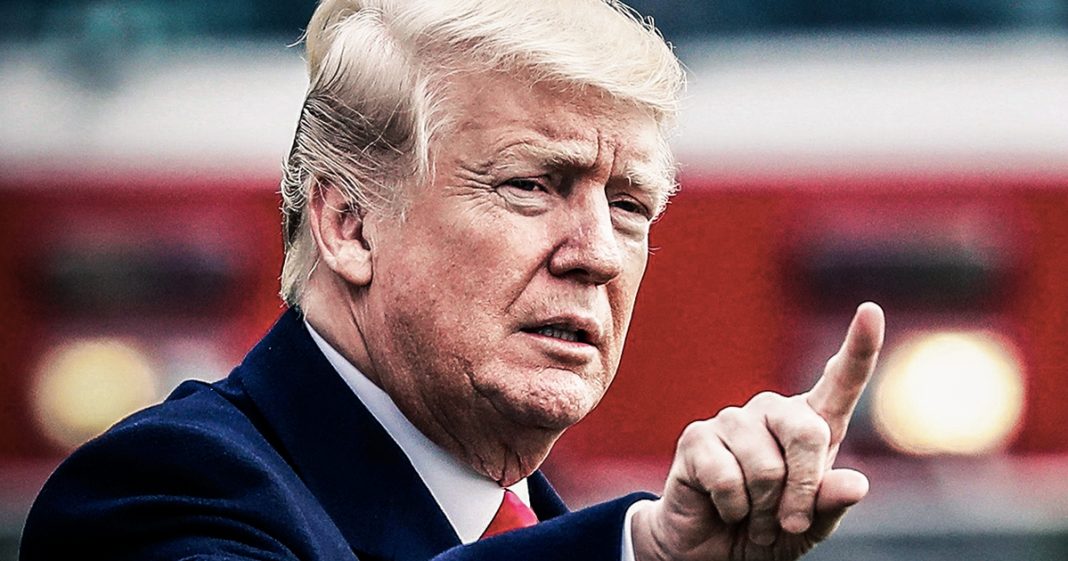 The Trump administration has come up with the most absurd argument imaginable to justify their attempts to repeal Obama-era fuel efficiency standards. They are actually telling us that we need to bring back the era of gas-guzzling SUVs so that we can SAVE LIVES. They say that cars that burn more gas will be more expensive, therefore forcing people to drive less. Farron Cousins discusses the environmental and economic reasons why this White House is the dumbest in history.

If we do not allow the Trump administration to cut, roll back the regulations that Barack Obama put in place to make our vehicles more fuel effective, if we don’t let Trump get rid of that, we are going to die.

At least that’s what the Trump administration wants us to think. They’re actually arguing right now, this is their public pitch, “If we don’t roll back those fuel efficiency standards that made your car get your miles to the gallon, so many people across this country are going to die. So what we need to do,” according to the administration and their EPA, “is roll back the standards, go back to the days of big, huge, giant hummers and gas-guzzling SUVs that get nine miles to the gallon, because in that way, by doing that, gas, obviously, the price of that is going up. Cars are gonna burn more gas. So people are gonna drive less so you will be less likely to die in a horrific automobile accident.”

That is the justification that this administration is using to tell us that we need dirtier air. If we don’t dirty up the air with gas-guzzling vehicles, you’re going to die. That is one of the most absurd and outrageous claims I think we have seen from this administration, but that is 100% what they’re out there selling right now.

They’re trying to tell us that they want to make cars so horrible with gas mileage that you don’t drive anymore. That you don’t go out and live your daily life. Not even realizing that if people decide to just stay home and not go out into the country, into the world, into their city, then they’re not spending money.

What’s gonna happen to local economies when everybody just says, “Oh screw it. It’s too much to go turn my car on now because of the gas economy. I’m just gonna stay home and not go out and spend money. We’re not gonna go out to eat tonight, sorry kids, we’re not going to Chuck E. Cheese. We’re not gonna go to the mall and buy new clothes.”

Yeah, that’s going to act hurt the economy by your own argument, you morons. But it actually has nothing to do with saving American lives because every automobile expert out there has told us that this is not going to save anybody’s life. Even if fewer people are driving, it’s not gonna reduce the chances of you dying in an automobile accident. And that is because these smaller, lighter, more fuel-efficient cars are actually doing just as well and in some cases better than those big, heavy, gas-guzzling SUVs during crash tests.

So yeah, those fuel-efficient small cars are actually just as safe, and some of them are even safer. Because they’re made with technology that lets them stop automatically. Rear back up cameras to reduce accidents. You know, side warnings. More airbags.

The administration is only arguing to reduce fuel economy here for one reason and one reason only. It’s because they want to fuel companies, the gas companies, the oil companies to make more money. That is literally the only reason why they are doing this. It has nothing to do with the safety of American citizens. It has nothing to do with saving us money, because in the long run it’s gonna cost the economy hundreds of millions upon millions of dollars from lost economic activity if people stop going out of their homes.

But it’s gonna cost, or it’s gonna gain millions upon millions of dollars for fossil fuel companies. Because everybody knows nobody’s gonna stop driving. They’re still gonna go out there. They’re gonna be paying more for gas. They’re gonna have to buy more gas on top of that.

Fossil fuel companies get richer, American consumers get sicker because they’re the ones that have to breathe in those dirty emissions. They’re the ones who have to go spend more of their hard-earned money just for gasoline to get from point A to point B.

People like Trump, people like Andrew Wheeler at the head of the EPA right now, and people like Scott Pruitt who had to resign in disgrace, they don’t understand that. Because they don’t live in the real world. They live in rich people land where the price of gas doesn’t matter. Where breathing dirty air isn’t a problem because they live so high up off the ground in their penthouses that they don’t have to worry about all the pollution down near the bottom where the rest of us live.

They’re trying to lie their way into repealing life-saving safety standards from the Obama administration, and they’re only doing it to benefit their donors in the fossil fuel industry. Never forget that point.