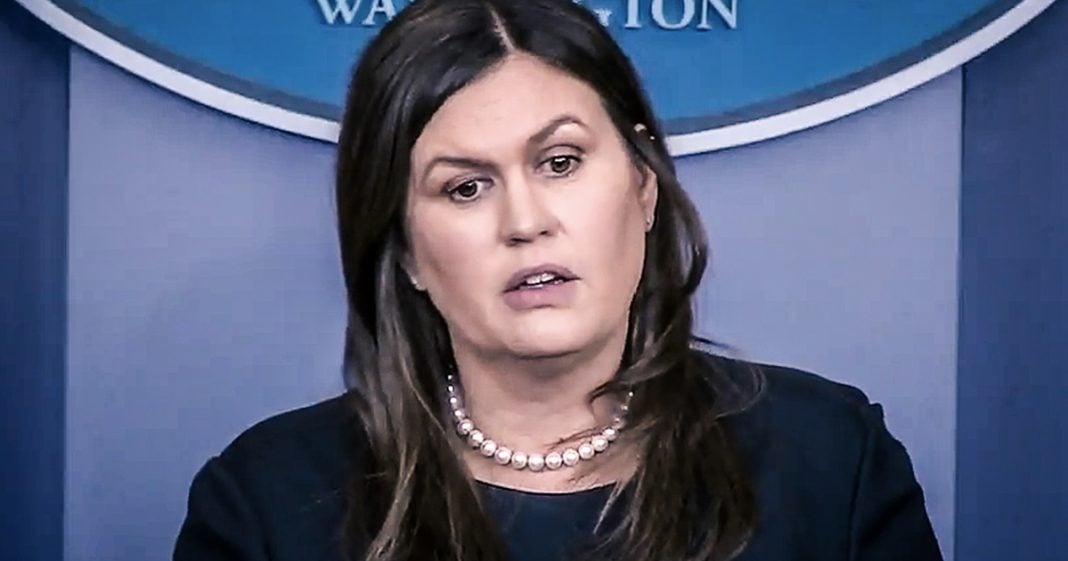 During Wednesday’s White House press briefing, Sarah Huckabee Sanders was immediately asked about Trump’s tweet from earlier in the day when he very clearly committed obstruction of justice. The mental gymnastics that she went through in order to justify his comments was spectacular, although it failed to convince anyone in the room that Trump wasn’t guilty as hell. Ring of Fire’s Farron Cousins discusses this.

On Wednesday morning, Donald Trump very clearly committed obstruction of justice on Twitter, when he asked attorney general Jeff Sessions to end the Muller probe immediately. So obviously, later in the day, during her White House press briefing, Sarah Huckabee Sanders was immediately, the very first question was about that specific tweet. Now we all knew Sarah Huckabee Sanders was going to lie about it, we just had to wait and see what the lie was going to be, and she didn’t disappoint with how ridiculous it was. Take a look.

Reporter 2:
One of those, first off, is the President tweeted this morning about the Russian probe’s direction to the Jeff Sessions, asking him to end the Muller probe right now. The President said a few weeks ago that he was not going to intervene with the Department of Justice investigation. Does that tweet this morning mark a change in posture by the President?

Sarah Huckabee:
It’s not an order, it’s the President’s opinion and it’s ridiculous that all of the corruption and dishonesty that’s gone on with the launching of the witch hunt. The President has watched this process play out but he also wants to see it come to an end as he’s stated many times. And we look forward to that happening.

Now look, Huckabee Sanders as lied to us from day one. Since the very second she took this job. And she has had some actually decent lies. Very clever, very creative. But I feel like in this particular one she wasn’t even really trying. That’s just his opinion. You could’ve given us something so much better. We wouldn’t have believed it because we know that you’re lying but at least act like you’re trying a little bit here Sarah. That was his opinion? That’s probably one of the weakest lies you’ve ever told.

And it actually gets worse ’cause later on during the Q and A, she goes onto say that, “No, no, no, President Trump was just fighting back.” That’s what he was doing. It’s not obstruction of justice, it’s fighting back. Well, obviously no one in this administration knows what fighting back means. And especially in the legal sense, you don’t know when and where to fight back because you fight back when you’re involved in an investigation in court. Anything done before that, especially to the investigators to try to make it go in your favor, is 100% obstruction of justice.

We already know that Robert Muller is looking through Donald Trump’s tweets for obstruction of justice and Trump knows that. And knowing that, he still tweeted that out on Wednesday morning. Here is the word for word tweet in case you haven’t seen it.

“This is a terrible situation and Attorney General Jeff Sessions should stop this rigged witch hunt right now before it continues to stain our country any further. Bob Muller is totally conflicted and his 17 angry Democrats that are doing his dirty work are a disgrace to USA.”

Here’s another thing too that I don’t think any of these idiots in the White House know. When somebody’s investigating you, probably not a good job to piss them off and say that they’re basically traitors to their country. You know, the people who are doing everything they can to find any piece of dirt on you to get you out of office, don’t make them angrier. It’s not going to work out well for you no matter what because if they get mad, if you make it personal which you have, what’s to stop them from doing the same and going even deeper into things they wouldn’t have looked at to begin with but they do have the clearance to actually do it, by the way, before Republicans say, “Well they can’t do that.” Actually they can.

Muller was allowed to go absolutely anywhere he wanted with this investigation. I suggest you go back and look into that. So yeah, maybe there was something they didn’t want to spend time with but you’ve pissed them off to the point that now they’re going to. You are doing everything that a guilty person would do right now. You know it Trump, Sarah Huckabee Sanders knows it and the best she can come up with to cover your ass is to say that, “No, he’s not obstructing justice, he’s just expressing an opinion.” And unfortunately his opinion is that he’s going to obstruct justice at any given opportunity and any time he tweets something out about this investigation.