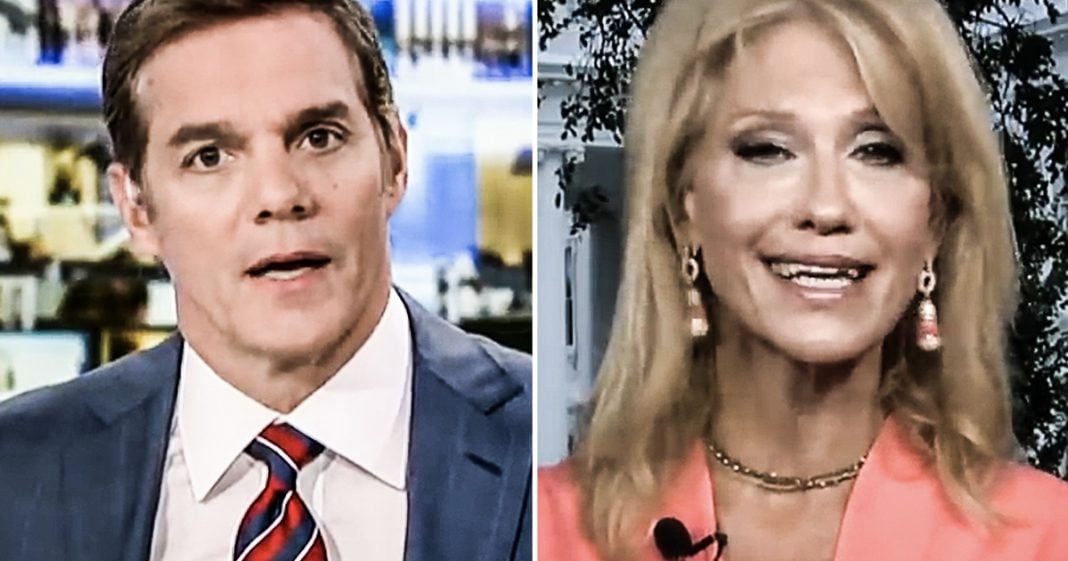 During a recent appearance on Fox News, White House Counselor Kellyanne Conway went on a bizarre rant about how she, personally, is not being investigated for anything and assured us that she never met with any Russians. The weird part is that no one asked her, and as far as we knew, she was never a target of the investigation. But her odd insistence of innocence has now led people to think that she might be somehow involved, as Ring of Fire’s Farron Cousins explains.

Speaker 1:
So Paul Manafort’s trial is now underway; he’s already been told that he’s not going to be released during the trial, that he has to stay in prison. Donald trump tweeted out that the man is being treated worse than Al Capone, even though they’re basically being investigated and tried for the same crimes here. Nonetheless Kellyanne Conway decide to go on Fox News and explain the difference between Paul Manafort and his trial and everyone else in the Trump administration. That was her job when she went on Fox News, to make sure people knew that there was a huge degree of separation between Manafort and everyone else. But during the interview Kellyanne Conway said something nobody asked, nobody needed to hear, nobody even wanted to hear but she went down this road for some reason, and it sounded very suspicious. Here’s what she had to say.

Bill:
Paul Manafort, how closely is the President watching this trial that begins today?

Kellyanne C:
We’ve not discussed that in quite a while and I would note for audience Bill that the judge has very strictly instructed no mention of Paul Manafort’s role in the Trump campaign. Don’t mention Trump, don’t mention Russia, don’t mention collusion. This trial obviously centers on matters that have nothing to do with the campaign. I think that even Mr Manafort as I read it, had requested that there be no mention of his brief tenure at the Trump campaign several years ago. And I believe there’s one witness that may … there may be one matter of somebody whom he had gotten a loan from in exchange for a job on the campaign. That’s just what I read. Obviously I was the campaign manager for the wining part of the campaign; I assure you I will not be brought up on Federal criminal charges of any type. And I certainly wasn’t making money in Ukraine or talking to anyone in Moscow. That’s very clear.

Alright, first and foremost, you kind of stuttered your way through saying you didn’t commit a crime. When you’re like, “For federal charges.” Yeah if you can’t get your words out properly when trying to just tell people for no reason that you didn’t commit a crime, and you can’t get those words out without stuttering. Most linguists would say that it probably makes you look a little bit guilty there like maybe you’re not telling the truth. But more importantly nobody thought you were a target of this investigation and as far as I know nobody had ever implied that you were involved in any criminal activity. Unfortunately because of your super odd admission there, again that nobody even asked for. Now we all kind of have to wonder if maybe you’re hiding something too. That was my immediate impression there. The second that you said, “I’m not part of the Federal investigation, no, not me.” I immediately thought that you had obviously done something wrong and I’m sure a lot of people watching that program thought the same thing.

Why would you just say that? That didn’t even have anything to do with you separating Manafort from the rest of the administration. That was just something you were trying to wedge in there that nobody needed or wanted to hear. And all you succeeded in doing in that moment, Kellyanne Conway was making a lot of people in this country question whether or not you may have actually been involved in criminal activity.