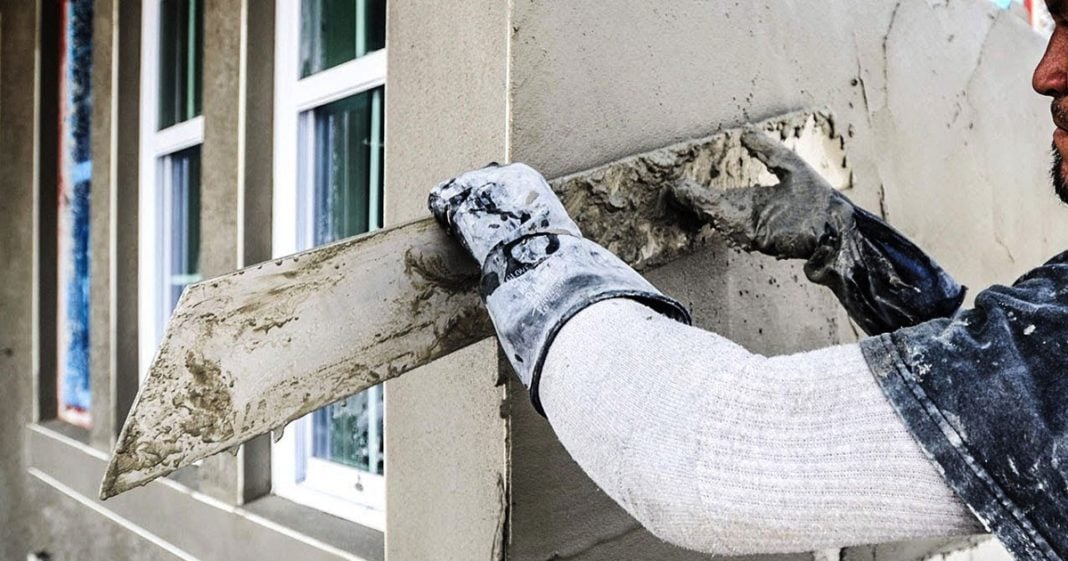 Manufacturers and applicators of stucco home exteriors are facing lawsuits over the shoddy quality of their work that is leaving homeowners with cracked home exteriors and subsequent damage to their homes by the elements. Ring of Fire’s Farron Cousins explains how the combination of negligence cost-cutting has resulted in people having their homes damaged from these contractors and home builders.

Buying a home is probably the largest investment that the majority of Americans in this country will ever make because most of us obviously can’t afford to have multimillion dollars invested into yachts or the stock market or any other investment. Our home is our investment. It’s something that we grow equity in. It’s something that if we need to, we can borrow against with a bank, It is of utmost importance that we keep that home safe. The problem is that sometimes it’s out of our control. Sometimes shoddy contractors or home builders want to cut corners in a way that makes our home vulnerable, our investment vulnerable to the elements, to damage and to other problems that these same contractors and home builders refuse to pay for.

What’s happening right now with these … there’re lawsuits against people, contractors and home builders who apply stucco’s sighting basically to homes now stucco occasion, not aware of it. It’s a form of cement that’s mixed with lime and water and a few other things. It’s sprayed onto the side of homes, gives it a very nice look, and it’s supposed to keep it protected from the outside elements specifically, obviously water damage. What we’re finding out right now, according to reports, is that there are too many contractors and home builders operating in the United States, specifically in wetter climates like those that we have down here in Florida, and they’re doing an improper job applying this stucco. They’re not following procedure, they’re not mixing it properly, and more importantly, they’re trying to apply it directly to the home, which makes for cracking and leaks and extensive water damage for homeowners.

What should be happening is that when they put stucco up, they’re supposed to have some kind of lattice that the stucco goes on. They’re not supposed to put it directly onto the house, but that lattice costs extra money. It costs extra time. Who has time for that When you got to turn and burn with all these homes out there that needs Stucco, right? That’s the mentality of these contractors. They want to get as many homes done in as little time as possible so they can make as much money possible so they cut corners on your home, they cut corners on your investment, and now that we’re finding that they’ve cut these corners, which causes the Stucco to crack out at a rate much higher than it would if they had done it properly, causing extensive water damage, but now they’re trying to say that hey, we’re not liable for it. You should have painted it better.

You should just cock it out. This is just part of the regular wear and tear of home ownership. Sorry, we’re not going to do anything for you to fix the mess that we the contractors created and that’s why right now these contractors and home builders are facing a flurry of lawsuits from homeowners who have had their homes partially destroyed because that contractor chose to cut corners. What makes it even worse, is that this is water damage, in some areas, depending on where you lie in the flood plain, you’re not required to have flood insurance because it’s unlikely that your home would flood. These people who have had their stucco crack out, cause water damage, they’re not getting any money from the contractors. They call their insurance company because surely this is something they would cover.

Only to find out, no. It’s water, that’s considered floods, So you’re on your own. These people’s homes, their investments, they’re being destroyed. All because these contractors wanted to cut a few corners, save a few dollars here and there and then move on to the next home so they could make even more money knowing that they had done a poor job for these innocent consumers who were just trying to make their home look better, just trying to make their home a little more secure from the elements and they’re the ones who got taken advantage of, once again, by corporate greed. Too many of these stories happen all the time. But this one and the lawsuits being filed, that’s really the only way to solve these problems.

We have to hold these people accountable. Law enforcement’s not going to do it, but the court system will and that is our only hope to get these people what they deserve and what they deserve, is to have a livable home. To have work done on their house that’s not going to be destroyed within a year because the contractor cut corners and the only way to do that is to take these people to court and make them pay for the negligence that they acted with when they applied this stucco and other kinds of home repairs and while we’re talking about, people getting screwed over, I think it’s almost impossible to even mention that topic without talking about Flint Michigan.

The place that had the almost deadly levels of lead in their water that made national news a few years ago and then everybody seems to forget about it. Well, here’s the thing, the residents of Flint Michigan still don’t have clean water and nobody is talking about that anymore. Here’s another thing that nobody’s talking about Flint Michigan. The death toll from the dirty water that that city has been drinking for years now is about 10 times higher than official estimates. According to the official estimates, the dirty contaminated water heading into Flint Michigan, has only killed 12 people through legionella bacteria. 12 people, right? That’s a low number. That’s a number that the local and state governments can say, hey, you know, it’s not huge.

Not a ton of people died from this bacteria, but no, according to new research, the actual death toll from legionella bacteria in the dirty flint water. Again, this has actually nothing to do with the lead. This is just a separate new contaminant or living contaminant, legionella bacteria that’s killed 119 people, almost 10 times what the official death toll is, is that remind you of something? Does it remind you a little bit of Puerto Rico where they said that 65 people died, but really it’s almost 6,000 people died down there. They’re doing the same thing here in Flint Michigan. 112 people dead. All because, excuse me, 119 all because, they didn’t want to give them clean water.

They hired a guy for over $100,000 to tell them how to do it, who happened to be a good friend of a Michigan Governor Rick Snyder. He’s the one who told them, hey, just divert the water over here. Give them dirtier water, they’ll be fine. Pay me over $100,000. I’m good to go. They did it. They paid him. They switched the water and people are dying, and again, the problems go far beyond just the lead. We’re talking about now deadly bacteria showing up in this water. What’s even worse? Federal officials or government officials, local officials, state officials, all the officials knew that this was actually happening and they sat on it and didn’t tell the public for 15 months.