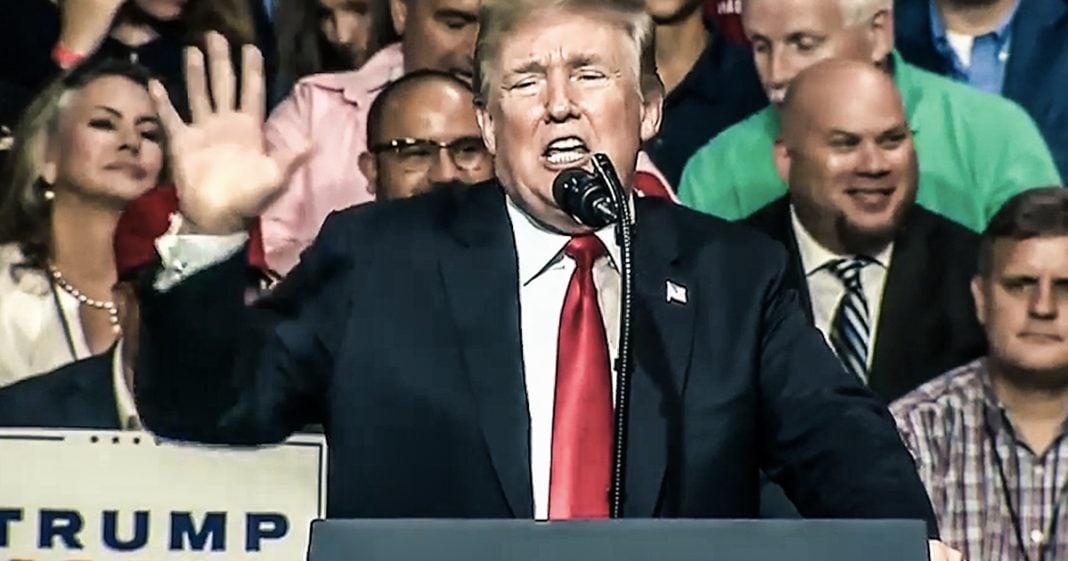 Donald Trump traveled to Tampa on Tuesday evening, and he didn’t disappoint people who were looking for their daily dose of crazy from the President. During a part of his speech where he was talking about the need for voter ID laws, he said that you have to have a picture ID to buy groceries or to “buy anything” but you don’t need one to vote. This man has absolutely no since of reality whatsoever, as Ring of Fire’s Farron Cousins explains.

On Tuesday evening, Donald Trump headed down to a campaign rally in Tampa, Florida. And, for those of you waiting for Donald Trump to say something stupid during his rally as he has every single time he’s ever done a rally, you didn’t have to wait too long, because, not too far into his little presentation, Donald Trump said this.

You’re absolutely right, Donald, this is crazy, but not the fact that we’re not requiring people to have photo ID to go vote. What’s crazy, is what you’re saying. First and foremost, could you be any more out of touch with how America actually works? How many decades has it been since you actually stepped foot in a grocery store? That’s what I’m wondering. Because, no, you don’t need a photo ID to go buy a loaf of bread or buy any kind of groceries, unless it’s alcohol or tobacco. Other than that, you’re pretty much good to go with a debit card or cash or check or whatever you wanna pay with, without having to show a photo ID. That is crazy. That’s just as out of touch as George H.W. Bush was when he went to a grocery store and was amazed by the new kinds of scanners they had to scan bar codes. The man had never seen that, even though they’d been out for years, because he was so wealthy he never had to do his own shopping.

And now we know that Trump is the same way. You don’t have to show an ID to go buy groceries. In fact, it’s pretty easy to get along in the United States without an ID. The only time I ever get carded is when I have to go fly, and the only reason I fly is because my job requires it. I’m not out there taking flights for fun, trust me. Can’t do that, wish I could but I can’t. So, yeah, twice a year, when I have to make these trips for conferences, I have to pull out my ID. The rest of the time that thing stays tucked away in my wallet, like most Americans, and nobody sees it because nobody asks for it.

Requiring a photo ID to vote is a form of poll tax, because again, you can get along perfectly fine in the United States of America without a photo ID. Perhaps you live in a city where you don’t have to have a car. Perhaps you can’t afford a car, so you don’t need a photo ID. Perhaps you’re not going out and buying any kind of alcohol or tobacco. You wouldn’t need an ID for that, and of course, contrary to what you say, you don’t need one to go buy groceries. What this does is it disproportionately affects poor, minority communities, where people do not have photo IDs. They may not have the means to go and get a photo ID, and even if they do, they may not have the means to pay for that photo ID. That’s the problem with this. That is what investigations into this have found. They haven’t found rampant evidence of any kind of voter fraud, but what they have found is that these voter IDs disproportionately affect poor and minority US citizens.

So, you can ramble incoherently all you want about needing a photo ID to go buy quote “anything in America today,” but those of us who live in reality understand that you can get by just fine without any form of photo ID here in the United States. It is not a requirement but if you’re going to make it a requirement to participate in our democratic process, then you, Federal Government, have to provide photo IDs to every citizen at no cost at all. That’s the tradeoff. You cannot require somebody to spend their own money in order to be able to retain the right to vote. That is discrimination, no matter who it is against. So, you wanna enact these regressive photo ID laws, then you better have the Federal Government ready to pony up, go door to door and make goddamn sure that everybody in this country has a photo ID.