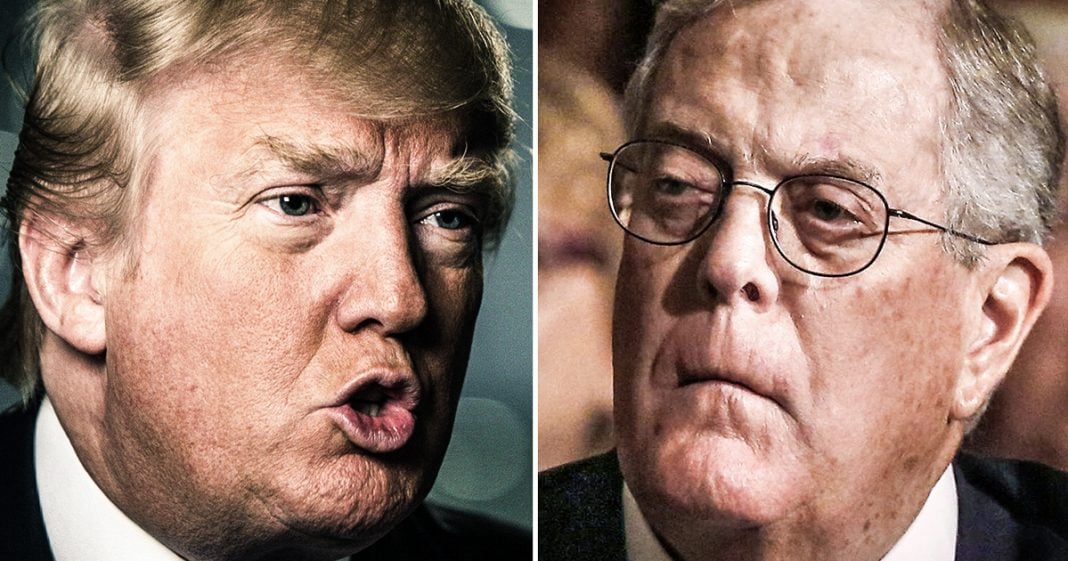 Donald Trump is not happy that the Koch Brothers are attacking him (very mildly), and so he decided to lash out at the conservative/libertarian billionaires on Twitter saying that they are full of bad ideas and that their network is highly overrated. What the two groups need to understand is that the Kochs paved the way for Trump – without them funding the Tea Party, he never would have had a chance. Ring of Fire’s Farron Cousins discusses this.

There’s a fight taking place right now between Donald Trump and the Koch Brothers. No matter who wins this fight, everybody in the United States that isn’t a member of the one percent is going to lose.

Here’s what happened: Last week, the Koch Brothers held their little annual “Let’s be rich together and by politicians” retreat, and they had some unkind things to say about Donald Trump, even though they were incredibly mild. They said that his White House has created a lot of division here in the United States, and that they weren’t too happy with his budget because they called it “Irresponsible spending.”

Well, according to Donald Trump, they may as well have just shot him in the back, because he fired back on Twitter and said the following over two different tweets here. This is both of them combined:

“The globalist Koch Brothers, who have become a total joke in real Republican circles, are against strong borders and powerful trade. I never sought their support because I don’t need their money or bad ideas. They love my tax and regulation cuts, judicial picks and more. I made them richer. Their network is highly overrated. I’ve beaten them at every turn. They want to protect their companies outside the U.S. from being taxed. I’m for America first and the American worker, a puppet for no one. Two nice guys with bad ideas. Make America great again.”

Alright, good God, there’s so many horrible things to unpack for that. “I made them richer.” You just admitted right there that all of your horrible policies have been to benefit the top one percent, people like both the Koch Brothers and yourself. You admitted it there, jackass.

Number two: “They want to protect their companies outside the U.S. from being taxed.” Could that be why … of all the tariffs you’ve imposed … you haven’t touched any of the goods that your businesses create, or that your daughter’s businesses created? Let’s not forget that all of your crap bearing your name is made outside the country, but you haven’t put tariffs on that stuff. No. You just put tariffs on everybody else’s. Don’t you dare accuse somebody else of not wanting to be taxed, when you’re designing your own policies to enrich yourself.

But let’s be honest here, the Koch Brothers are not saints. They’re not victims here. The Koch Brothers laid the groundwork years ago to create Donald Trump, and they did it by funding crazy right-wing politicians through the Tea Party, which Americans For Prosperity … this Koch-funded network … created. They paid for the buses to get these idiots in George Washington outfits to show up at Tea Party rallies. They paid for it. If it wasn’t for that dumbing down of American politics, we wouldn’t have set the stage for a guy like Donald Trump; not to mention the fact that there are more than 40 people currently working in the Trump administration who have ties to the Koch Brothers. 40.

Yeah, these two groups of highly-wealthy individuals can act like they’re enemies on Twitter, or say things behind closed doors, but at the end of the day these morons feed off each other. The Koch Brothers laid the groundwork to create Trump. Trump is enacting polices that make the Koch Brothers even richer. What they’re both doing is trying to vie for a little bit of good publicity, at this point. Unfortunately, it’s backfiring spectacularly for both groups. Nobody comes out of this looking like a winner, but the real loser regardless is going to be the American public.