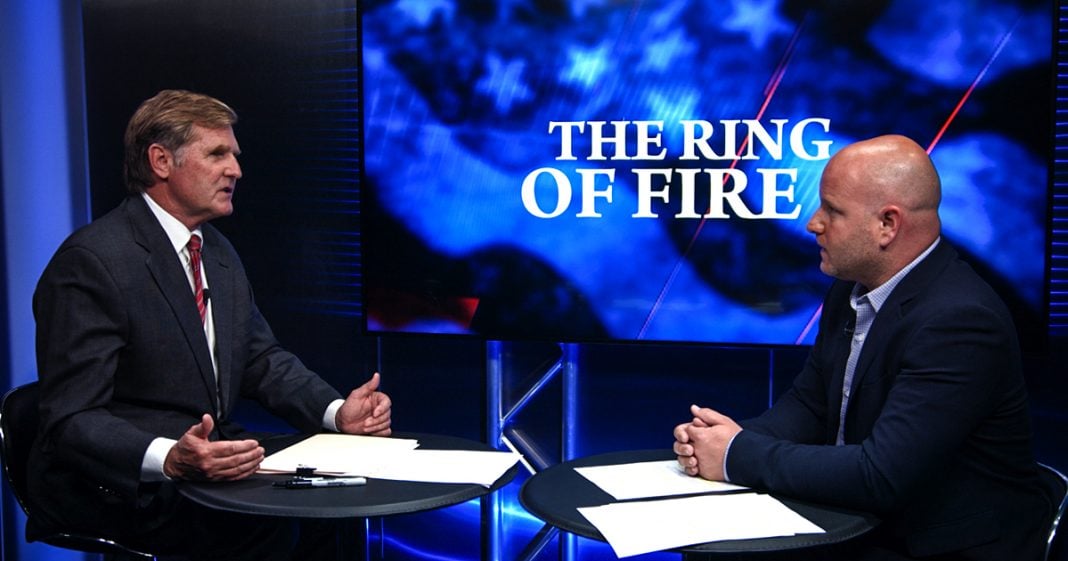 MGM Resorts has filed a lawsuit against the VICTIMS of last year’s mass shooting that took place during an outdoor concert. Ring of Fire’s Mike Papantonio and Farron Cousins discuss this issue.

Mike Papantonio: MGM Resorts has filed a lawsuit against the victims of last year’s mass shooting that took place during an outdoor concert. I saw this article and I’m thinking where do you go from here? Why does MGM think it’s a good idea to sue the families of people who lost somebody, how is this a good idea? Give me your best spin on it, because I’ve been practicing law for 35 years and I can’t find the spin that seems to work for MGM.

Farron Cousins: What’s happening here is that you’ve got basically these scumbag lawyers for MGM, who say, “You are looking at a ton of liability here. You’ve got the issue of you gave this guy who did the shooting a free pass, you let him use your service elevators, you didn’t question him. You let him stay locked in his room for a week without checking on him. So here’s what we do, let’s sue them first. Let’s go ahead and make that happen, say that their claims are baseless and you, MGM, have no liability whatsoever.”

Even though we know that this is a losing argument, what it’s going to do is it’s going to bleed these people dry, I hate to use that phrase here for mass shooting survivors, but that’s what it is. They want to prolong the suffering, perhaps make some of them drop out of the other lawsuit because they can’t afford to defend themselves against these massive suits coming from a giant like MGM that could afford to have lawyers all day long, every day.

Mike Papantonio: And then the clients are doing something wrong because they’re allowing these lawyers to bring the case. This, to me, if I’m trying this case, what I’m going to do is I’m going to make this lawsuit part of the punitive damages. I’m going to say not only do we have a case where these companies were responsible for these deaths because of their negligence, because they clearly understood what was happening, failed to do what they should have done, protect the public. They were told that this was a problem ahead of time, they had plenty of notice of these kinds of problems.

So the mother of a child who’s killed here brings the lawsuit, the case takes place, the trial takes place, and then comes something called punitive damages. Most of the time punitive damages is the second phase of a trial and when that punitive damage is decided, you’re able to look at what’s the conduct, the overall conduct, of the people I’m suing, MGM. What is their conduct?

Their conduct in this situation is so bad, not only have they been responsible for the death of these people, but now they’re suing the people, trying to get their money back. I gotta tell you, there’s no jury on earth that is not going to take this absurd step that’s made by MGM and make them suffer in punitive damages. I mean, do you agree with that? Unless I’m missing something here.

Farron Cousins: No, no, no, 100%. Look, 58 people died, you had over 1,000 injured. I actually had a good friend of mine who was there, she was at this concert, she fled. She said you ran between the shots, when you stopped hearing the gunfire, you got up and ran. And as soon as you heard it again, you had to dive underneath or behind whatever it was. She wasn’t hit, she was safe, she survived, she was okay, but she still will talk, from time to time, because there’s a PTSD to it.

Farron Cousins: It comes back, you have these nightmares. That’s not going to go away.

Farron Cousins: And now, the people who have filed this lawsuit are going to deal with not just the horrifying memories, not just the loss of the family, the loss of everybody else, or the fact that you got shot and you live now with a permanent disability or physical pain every second of your life, now they deal with this.

Mike Papantonio: Yeah. Let me tell, I’m going to take it this far, MGM, the shareholders for MGM, should sue the lawyers who made this decision to bring this lawsuit. They should sue them for malpractice because in the amount of malpractice that takes place here is going to be determined at the punitive damage phase. Because MGM’s going to be punished for this move and then these idiot lawyers that represent MGM have got to sit in a room and they’ve got to understand that the amount of that punitive damages, which will be in the … it’ll be in the billions, the amount of that punitive damages is what they’re responsible for, for their malpractice. That’s the way I see this case, we’ll watch it develop.

A new environmental lawsuit has popped up in an attempt to stop the administration from selling off more of Gulf of Mexico for oil drilling. Okay, all right. So here we are, we live on the Gulf of Mexico in Pensacola, Florida. We’ve seen what happens with BP, we have an entire ecosystem absolutely devastated, that really hasn’t recovered. We want to put a spin on it, it’s recovered, our tourism is at an all time high, we’re doing great, we’re back. But if you go offshore far enough, you still see the remnants of this disaster. What’s your take?

Farron Cousins: It never ceases to amaze me, when we see the federal government … And we saw it during the Obama years, this is not something new-

Farron Cousins: … that we come through this massive disaster, and we learn nothing from it. We’re talking about 78 million additional acres that are up for lease right now and-

Mike Papantonio: Who put them up for lease? The Trump administration?

Farron Cousins: Yeah, yeah, yeah. This is Ryan Zinke, Department of the Interior.

Mike Papantonio: In the media, known as Stinky.

Farron Cousins: What’s even dumber about this-

Mike Papantonio: Not my words, that’s-

Farron Cousins: But they’re trying to make it to where it’s not necessarily the deep water, which is what Deepwater Horizon was, no, no, no. These are closer inland because they think for some reason that’s safer. Now, could you imagine if we had the BP oil spill but-

Mike Papantonio: It was happening on our beach.

Farron Cousins: … 10 miles out from shore.

Farron Cousins: This whole area would still be covered in oil, but they think it’s smarter because it’s not as deep.

Mike Papantonio: Yeah, their argument is we have less risk the shallower we go. But if you’ve ever been to Pensacola or ever been to a resort beach area, and you understand that you can drive a couple miles and see these oil derricks out there, you understand what the risk really is. It puts this community under huge risk, tourism is the only way that we have to survive in this community and there’s a lot of communities around the country.

Mike Papantonio: Typically, what you’ll see is you’ll see these beach communities, also you’ll see military involved, there’ll be military bases. They typically like to operate out of an area like this. And resorts, you take the resort part of it away and it’s [crossover talk 00:07:23].

Mike Papantonio: Yeah, yeah. I agree, it’s a very tough road. Thank you for bringing it though, I mean, you’ve gotta try.