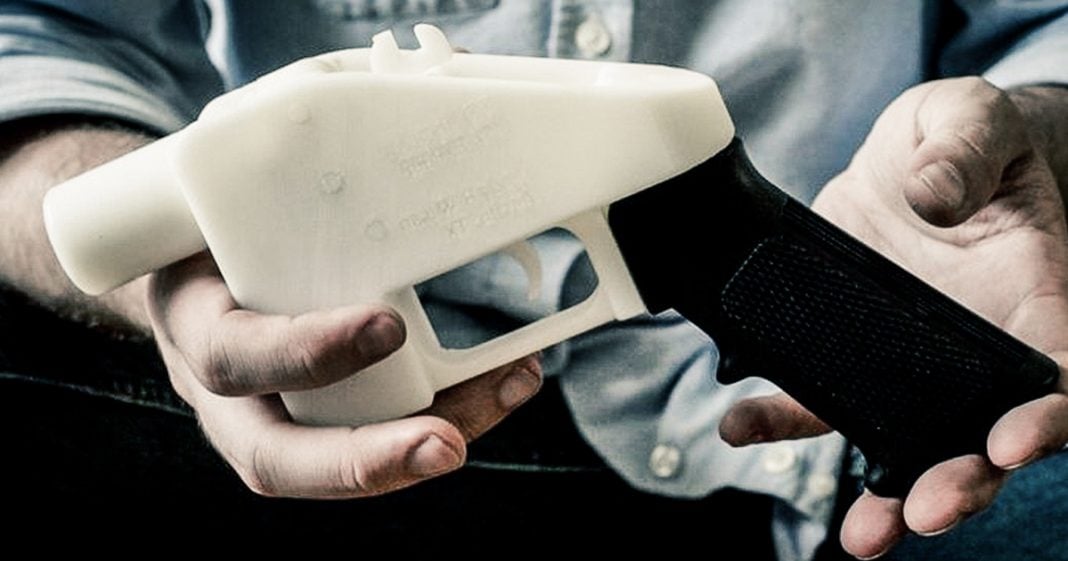 A federal judge has, at least temporarily, blocked the online release of plans that would allow Americans to print 3-D guns at home. If these plans are allowed in the US, it will create a new era of untraceable firearms and an unregulated flow of weapons onto our streets. At a time when more and more Americans of all ages worry about getting shot while at school or work, more guns are the last thing we need to worry about. Ring of Fire’s Farron Cousins discusses this.

Today, August 1st was supposed to be the day that a company called Defense Distributed was supposed to release blueprints online for average citizens who happen to own a 3D printer to download these blueprints, and be able to print pretty much any kind of gun, including assault rifles that they wanted.

Luckily, Tuesday afternoon, a federal judge stepped in and said, “Absolutely not. We cannot allow for the safety of this country these blueprints to be available to the public.” Now, originally some of these blueprints had been posted online by Defense Distributed back in 2013. They were forced to remove them because they violated federal laws. But then, somewhere along the way the federal government decided to settle with them, rather than continue to fight back against the release of these blueprints.

They set yesterday, or excuse me, today is the date. Luckily, we had a federal judge that had enough sense to say, “Yes, this is going to get people in this country killed.” But more importantly, it’s going to get people in this country killed with untraceable firearms. That’s the real threat here. And you can whine all you want about this infringing on our second amendment rights, but lets not forget that the first sentence of that second amendment begins with “A well regulated militia.” Regulated being the keyword. If we allow regulations to go out the window there is nothing to stop the most dangerous people in this country from getting their hands on some of the deadliest weapons imaginable.

And, if they don’t have to go through background checks, if they can just spend a thousand dollars on a 3D printer, they can start making guns left and right, sell those for a major profit, pay off that printer in a matter of hours. This is a national security issue, here. I don’t think any reasonable person in this country would think that this would be a good idea to allow the average Joe to be able to print a working firearm at home.

And again, these are firearms that do not have serial numbers. Nobody had to go through a background check, so you cannot link any of the guns to any of the people should they be used to commit a crime. We have a very real problem in the United States today, a problem that is unique to us in the industrialize world. And that problem is mass shootings, mass death at the hands of psychopaths who get their hands on these high powered weapons. That’s the problem.

If you wanna own a gun because you feel like it makes you feel safer in your home, go for it. It’s the people who go out there and buy these weapons capable of firing dozens of rounds in a minutes. That’s the problem. Those are not needed on our streets by average American citizens. There is no way to argue that we should have those. No argument holds any ground. People don’t need that kind of fire power. You don’t use them for hunting. You don’t need them for protection, unless your home is being invaded by several hundred people, in which case even that’s not gonna stop it. And those people who say we have to defend ourselves against the Government, do you think that your AR15 is gonna hold off a fighter jet? Is it gonna hold off a nuke, a bazooka, a missile launcher, anything like that? No, it’s not.

So again, there’s no argument as to way average human beings in the United States need those weapons. It’s a gun culture. It’s something that makes people who feel small feel bigger. That’s why they do it. And the last thing we need as a country is people being able to print out these weapons of death in their homes, to be able to go out, nobody knows they have them. Made of plastic, so probably gonna get through some metal detectors, depending on the pieces that you use. I know some of them do require metal pieces, but some of them don’t.