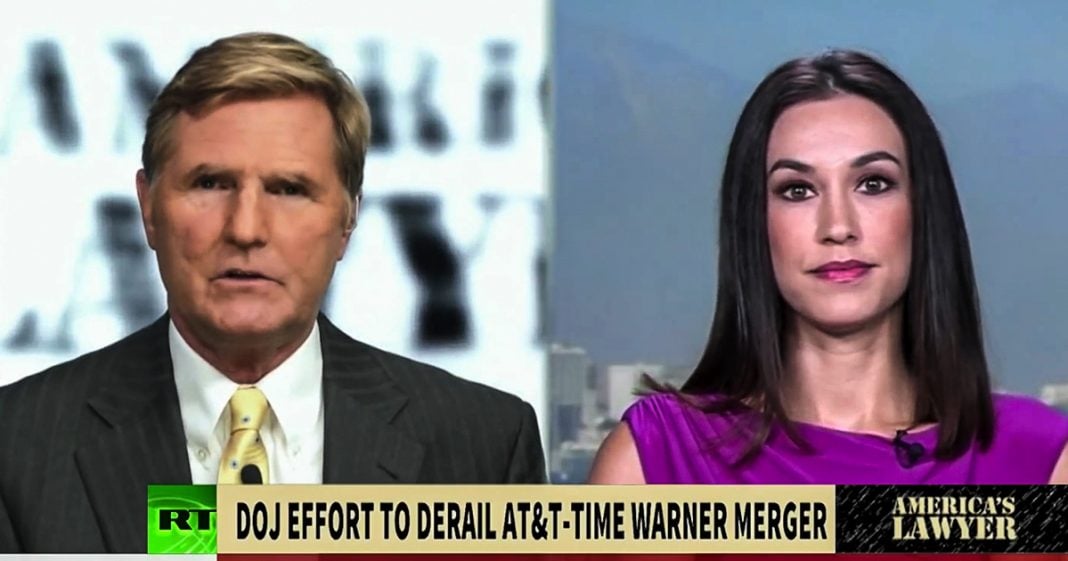 Via America’s Lawyer: It seems the legal disputes between the government and the newly merged AT&T Time Warner haven’t ended. Mike Papantonio is joined by Brigida Santos to discuss why the Department of Justice is appealing this case after the merger is complete.

Mike Papantonio: It seems the legal disputes between the government and the newly merged AT&T Time Warner haven’t ended. Originally Justice Department tried to stop the merger on the basis that the deal would lessen the competition. But the judge ruled that the 85 billion combination in money was actually legal.

Joining us to talk about that, is RT correspondent Brigida Santos.

Brigida AT&T and Time Warner completely … the merger is basically complete, was completed and all of the sudden we’re looking at it again. The judge issued the ruling, so now the merger is complete but the DOJ is appealing and saying, “You haven’t looked at this closely enough”. Isn’t that what the argument is?

Brigida Santos: Yes they’re arguing that they’re standing by their original argument. The Justice Department is saying that the merger is anti competitive. And in the mean time, unfortunately AT&T will be moving forward with the merger. It’s already begun rolling out it’s plans. Because the Department of Justice did not issue a stay.

Now if the appeal is won by the Department of Justice, it would send a message to other companies to trying to acquire other verticals that it is still as monopolistic as a horizontal merger. But it’s very unlikely to happen at this point.

Mike Papantonio: If you think about it, the Supremes aren’t going to do anything about this. I’ve never seen a Supreme Court majority more intent on helping corporate America. Add Kavanaugh to that, he is an absolutely corporate America puppet who’s never done anything that a large corporate didn’t want him to do.

The DOJ originally took the position that the combination was anti competitive as you just said. But the judge in this case determined that the DOJ had fairly failed to make their case. In other words, they put it in writing but when it was presented to the court, the DOJ did not carry the ball.

We’ve heard that often about the DOJ. You wonder where they find their trial lawyers. Sometimes they aren’t actually trial lawyers. And that’s why we find that … I think this is an important part of the story. The reason you find so many corporations getting away with absolutely murder. By the pharmaceutical industry, they have scam after scam. Or wall street that has scam after scam. And nobody’s ever prosecuted is because the Department of Justice doesn’t have a bench where it comes to be able to put trial lawyers on this issue.

What is your take? How did the DOJ drop the ball here as far as what the judge said?

Brigida Santos: Well the judge just said that the Department of Justice didn’t prove their case. That it was anti competitive and that it would raise prices for customers. And result in lower quality products. But since the merger has gone through, AT&T has in fact done exactly the opposite of what they said they would do.

They did increase prices on one of their services, which is their DIRECTV NOW service rather than lowering prices as they said they would. And in the future they could raise those prices even higher because AT&T is planning to create their own content.

Which would then be in direct competition with some of the content created by the companies that are broadcast on DIRECTV NOW. So the Department of Justice may actually have a better case now. But again it might still be too late and as you said, if this does end up in the Supreme Court, it’s very unlikely that the Justices are going to side on behalf of the Department of Justice in this case.

Mike Papantonio: Yeah, I find it interesting President Donald Trump, while he was still a candidate if you remember. He railed against the merger. He was hostile to the media then and remains hostile to this day. Is this whole thing centered around politics? You have to ask yourself. And then you have to consider the fact that a lot of these Federal judges that have been, well I would say the overall majority. I would go as far as saying the overall majority of Federal judges that have been appointed in the last 15 years are so pro corporate. Now that goes for Obama, his pro corporate appointments were nauseating. Absolutely nauseating. George Bush, you would have expected his to be pro corporate Republican pro corporate. They weren’t quite as bad oddly enough as Obama’s. So what we’re living with now is this whole thing of the judges having to take a look at this.

But how do you think this plays out politically beyond that, beyond those political appointments, how does it play out in politics?

Brigida Santos: Well unfortunately Trump made this merger in particular political when he said as a candidate, “AT&T is buying Time Warner and thus CNN a deal that we can not approve in my administration.” And of course CNN is critical, but also it is political because Trump, the Department of Justice under trump has already approved a very similar merger with Disney. Allowing it to move forward. So it doesn’t seem to be that they have a probably with these vertical mergers. But in this case this does seem political because Trump is offended by CNN’s existence.

Mike Papantonio: Thank you for joining me, okay.