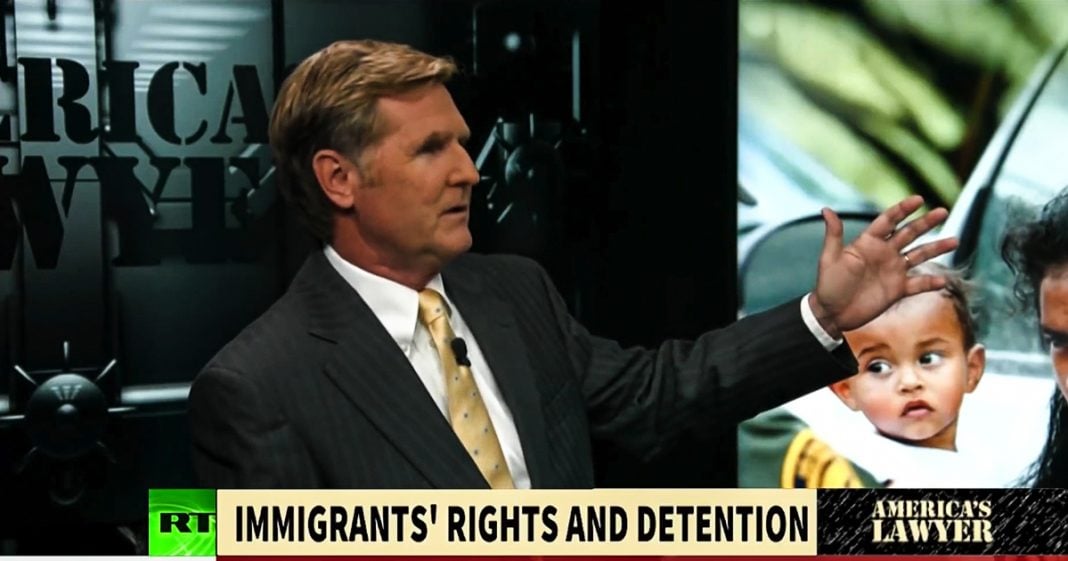 Via America’s Lawyer: Mike Papantonio and Farron Cousins take a look at the Trump administration’s policy of detaining migrant children, and the failed attempts by the justice department to delay reuniting children with their families.

Mike Papantonio: Now let’s move onto the immigration chaos. With no clear plan on how to reunite the families that they separated at the border, the US Justice Department tried to argue in court that they should be able to keep immigrant children detained for even longer periods of time. A claim that the judge, thankfully, didn’t buy into. This story … when I saw this story, you know the first thing that I thought about? I thought about the travel ban. Now let me set this up just a little bit. The travel ban, everybody said there’s no way it was going to succeed. You and I did shows on it, you and I talked about the reason it would succeed. This is a similar analysis. Take it from there.

Farron Cousins: Right, what we have right now is the administration, no administration, can keep a child separated from their parents in detainment for more than 20 days.

Farron Cousins: Well as it turns out, that’s actually based on a previous California court case: Flores v Reno. So if they file some kind of emergency injunction, get the emergency hearing from the courts and appeal this thing fast enough, what they’re going to do is get the Supreme Court, which is completely right wing at this point, and they’re gonna rule and say, no the Flores decision, Flores agreement no longer holds. This is an emergency power, police power because we have a crisis and we have to deal with it. Which is what they did with the Muslim ban basically.

Mike Papantonio: Well okay, let me tease that out just a little bit. I remember when the ban, the travel ban came about. You had lawyers working for big networks who knew better. They absolutely knew better than to speak these words. And they spoke the words, “There’s no way that this will stand up.” I actually heard them say it and as I was listening to it, I was going, well you maybe never took a constitutional law class. Which seemed incredible to me that I would hear that kind of discussion coming. But the constitutional law aspect of this says that, we give to the president on executive order, kind of status, we give him very broad police powers. Now what was the rationale on the ban? The rationale on the ban was we believed that if affected health, safety, welfare kind of issues. That’s what the test is all the time. The test on this, this judge may have ruled when I can allow this but if it’s tested, the judge is going to be overruled. Unless the court just gets so political and says, gee whiz you know, we have to do this because its not the right thing to do.

That always makes bad law. You and I might agree with what the judge did. We do agree with that. But if we’re really analyzing where this is going: it’s a dead end.

Farron Cousins: Absolutely. This judge, Dolly Gee, she did the right thing.

Farron Cousins: We have a real humanitarian crisis here in the United States. The United Nations has condemned it as massive Human Right’s violation. The administration, DOJ, they have no idea how to reunite any of these families. Most, not most, but some of them actually they’ve already been sent to orphanages.

Farron Cousins: Their parents were deported, they didn’t realize it so they’ve sent them off to orphanages. They’re gone, they’re out of the system. Hopefully somebody adopts them at this point. And what they’re trying to do is buy a little bit more time. And a judge actually said recently that you missed your deadline and somebody had asked me, “Well what does that mean? What kind of punishment?” I said, “There’s not gonna be a punishment because they can prove, even though it’s not good faith effort, they can show that they’ve attempted a good faith effort to meet the deadline.”

Mike Papantonio: That’s the hoop they have to jump through.

Mike Papantonio: We’ve tried to do this, we can’t do it. And oh by the way, this is a health, safety and welfare issue. Look, all you gotta do is go back, way back, look at the Japanese internment camp kind of rationale. Now that, think of how extreme that is. It was a time of war. Pearl Harbor had been bombed but if you look at the rationale, the rationale says, we’re gonna give broad powers both to Congress and the White House where it comes to making decisions. This is an executive order decision, you’re gonna see that the way they justify is, we’re concerned about health, safety and welfare. They’re gonna land there some way. They may not use those exact words but that’s where they’re gonna land on this discussion.