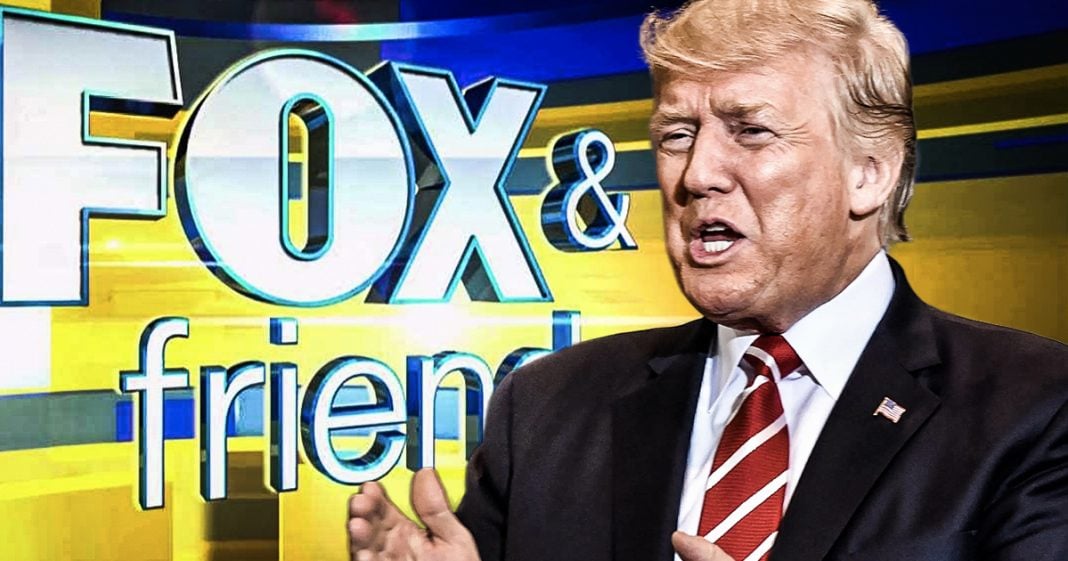 According to interviews with White House staffers, President Trump has been scheduling meetings, and sometimes completely changing the topics of his meetings, based solely on what he sees Fox & Friends reporting on each morning. This means that the grotesque human beings sitting on that Fox couch each morning are essentially dictating the direction of this country. Ring of Fire’s Farron Cousins discusses this.

General John Kelly just finished his very first year as Donald Trump’s official Chief of Staff. It’s been one year, since we were told that this man was gonna come in, and reign in Donald Trump, and be the real leader that this administration needs … whip him into shape. Get him back on the right course. He has failed in every possible way.

Here’s what a new report from Politico says, and this report actually comes from reporters from Politico speaking to people inside the White House. It’s not only that John Kelly has failed, but, John Kelly at this point, admits he has no influence over Trump whatsoever. He’s given up trying to change Trump’s mind, trying to get Trump to get off Twitter. He has stopped.

More importantly, the reason he has stopped, is ’cause he realizes that there is one advisor that has more say than John Kelly ever will. That advisor happens to be Fox News. According to insiders in the White House, who spoke to Politico, Donald Trump is basing his daily meetings off of what he hears, first and foremost, in phone calls with Sean Hannity the night before. Two, on what he sees on Fox & Friends, every single morning.

Staffers say that Donald Trump will go upstairs, watch TV, Fox & Friends, and then, he comes down and calls meetings with topics based solely on what he just saw on Fox & Friends. At this point Fox News is 100% running this country. They’re dictating the agenda, whether it’s Sean Hannity and his private phone calls to the President, or what those morons on the Fox & Friends couch say every morning.

They’re the ones who are driving the agenda of this country. It’s absolutely terrifying, unless, of course, you happen to be a Fox News viewer, and you think the network does no wrong. For the rest of us, you know, the 328 million Americans who don’t watch the network, it’s a pretty terrifying thought.

These people have no idea what they’re talking about, on a daily basis. These are some of the dumbest human beings, you could ever imagine being put on television. Yet, somehow, Donald Trump has put 100% of his faith in these idiots, to tell him what’s important for the day. This is a network that has an agenda. That agenda is, to make Democrats look like idiots, and make Donald Trump look like God, himself. I guess that explains why Donald Trump seems to love them so much.

If the fact that policy, that meetings at the White House, that his agenda, is being driven by what is covered each morning on Fox & Friends … if that doesn’t leave you with a bad taste in your mouth, then you must not understand how dangerous, both Donald Trump, and Fox News can be, since they teamed up to create this unholy alliance of evil. That’s what’s happening in this country today.

I’m sure that Sean Hannity loves his little pillow talk with Donald Trump. He loves telling him what he should or shouldn’t do, or how he should frame a certain issue. But, that’s not Sean Hannity’s job. Sean Hannity’s job, is to just go on TV and be an idiot. He should have no say, whatsoever, in US policy, but he does.

This is a very real threat to this country, because we have seen some of the horrid, disgusting, deplorable things, that Fox News has said. We’ve been talking about it for well over a decade, at this point. Now, those people, those horrible, hate filled individuals, are the ones driving policy in the US, today.