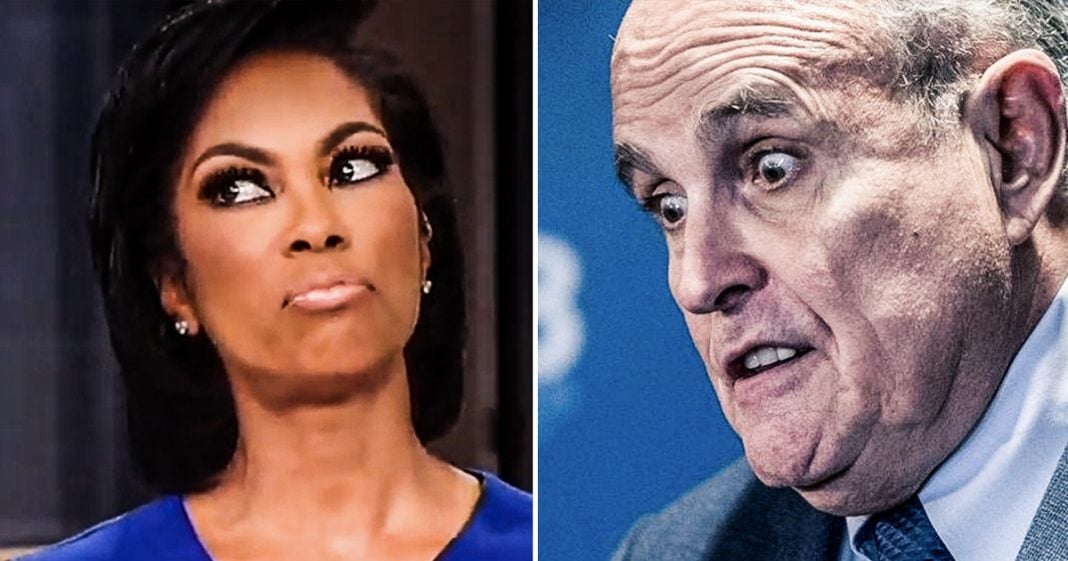 Rudy Giuliani had a disastrous Monday, to put it mildly. After a string of bad interviews, he decided to give it one more shot by appearing on Fox News, the friendliest network to this administration, and he somehow managed to make things so much worse for himself and Donald Trump to the point that even the hosts couldn’t believe how much Giuliani was harming his case. Ring of Fire’s Farron Cousins discusses this.

Rudy Giuliani had a really, really bad Monday. I know most people say they hate Mondays, but, trust me, yours probably wasn’t as awful as Rudy Giuliani’s. See, Giuliani thought it’d be a good idea Sunday and Monday to make the media rounds, get his face back out there, and also destroy his client’s case, which is exactly what he did during almost every single interview. In fact, after he had given all those horrible interviews, he decided to go on Fox News, the friendly audience, the people who absolutely could not screw this up. They’re team Trump. They’re going to make sure Giuliani doesn’t do anything ridiculously stupid, and they absolutely failed. Take a look at what happened when Giuliani phoned it in on Fox News.

Harris Faulkner:
Let me just ask it this way. You’ve now told us about two meetings. There was one that the public knows about, which when you talk about a meeting and you say that the president wasn’t there, that’s the one that everybody would assume that we’re all on the same page about. What you’re saying now is that there was another meeting that was leaked that has not been made public, and I would assume until now really described by you, Rudy Giuliani, in detail, that happened three days prior that had Don, Jr., Jared Kushner, Paul Manafort, Gates, and possibly two others. That’s the meeting that Michael Cohen says the president was not … or the president knew about ahead of time, but you say the president was not there.

Rudy Giuliani:
No, no. Cohen is not alleging … Look, I don’t know. All I have are two reporters telling me Cohen told them there was a meeting three days before with a group of people that I said and that they discussed [inaudible 00:01:42] meeting and that the president was not there. He didn’t say the president knew about it. I am telling [inaudible 00:01:48] that meeting didn’t take place, never happened. He had to have it with himself. Second, there’s another leak. This one is out, and this one Cohen says he was in Donald Trump’s office when Donald Trump, Jr. walked in and told them about a Russian meeting that was about to start. That is also not true.

Melissa Francis:
This is Melissa Francis. I just want to jump in. I don’t think any of that really addresses the question of why you would say he wasn’t at the meeting.

Rudy Giuliani:
Who? Why did Cohen say?

Melissa Francis:
Why are you saying that the president wasn’t at the meeting? I understand those two meetings that you just set out there, but that doesn’t explain why you’re saying he wasn’t there.

It takes a lot for the people who are your friends, the people who would defend you no matter what. The guys at Fox News, the women at Fox News, the producers at Fox News, everybody is on your side. When you leave them stunned, shocked, searching for words, trying to make sense of what the hell you just said, you know you’ve screwed up. Because as those hosts right there on Outnumbered admitted, you just gave information that you hadn’t said before, and it doesn’t look really good for Donald Trump. “Was there a second meeting?” “Maybe, but no, but Trump was there but he wasn’t there, but he didn’t know about because he did know about it.” That is essentially what happened during that interview.

But I guess the biggest takeaway here throughout both that interview and every other interview Giuliani did was the talking points have, once again, changed. It’s no longer, Trump didn’t collude, although Trump is still saying that. It’s that collusion is not a crime. Well, the reason Giuliani keeps saying that is because he’s fixated on that particular word, collusion, that word choice, because it’s very hard to find a statute in federal law that has the word collusion, and that’s what he’s trying to say. But that doesn’t mean that conspiracy, defrauding the nation, things like that, foreign election interference, all of those are 100% illegal as is working with a foreign power to influence a US election. Yes, 100% illegal. But Giuliani is able to say that because we’re using the word collusion, it’s not illegal.

Well, yeah, but I’m pretty sure when the charges come down, it’s not going to have that word in it. It’s probably going to be worded a little bit more eloquently in some kind of legal language that most of us may not even understand. But stop trying to argue semantics when the heart of the case is whether or not a foreign power interfered in a US election with Donald Trump. But by all means, please, keep going out and doing interviews because at this point you can’t even go in front of a friendly audience, like those on Outnumbered on Fox News and give a decent interview where you don’t completely screw over your client.