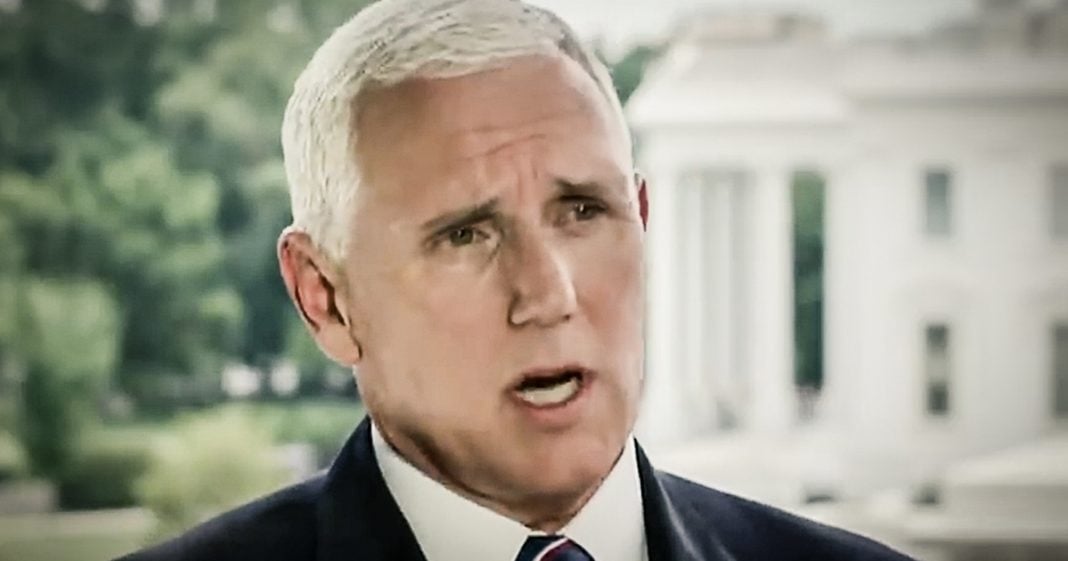 During an interview with Fox News this weekend, Mike Pence staunchly defended the freedom of the press and said that everyone in this administration – including Trump himself – believes that the press should be completely free and shouldn’t be silenced. He then immediately went on to defend his administration’s decision to ban a CNN reporter from an event because Pence says that the press should always adhere to the “decorum” of the White House. In other words, they support a free press as long as that press does EXACTLY what they want them to do. Ring of Fire’s Farron Cousins discusses this.

This past weekend, Mike Pence appeared on Fox News with host Maria Bartiromo, where she asked him about the incident earlier this past week where a CNN reporter was removed from a pool spray and then informed that she couldn’t come back for an event later in the day. They basically banned her for the day. This is what Mike Pence had to say about that reporter being banned.

Maria Bartiromo: I’m going to ask you about access to you and the President and this White House, was it necessary to throw out Kaitlan Collins from CNN the other day? What happened?

Mike Pence: Well, let me say that this administration believes in the freedom of the press, and President Trump and I and our entire administration have provided extraordinary access to the media. The President answers so many questions in so many different settings, and I can assure you that we’ll continue to do that.

But maintaining the decorum that is due at the White House, I think is an issue that we’ll continue to work for. But I’m very confidence that, whether it be with that network or any network or any members of the media, that we’ll continue to work in a way that ensures the access of the American people to this administration and to all the incredible progress we’re making.

Yeah, this administration loves free speech, they love the freedom of the press. They have a great relationship with the press, just so long as they stay silent, they don’t ask any difficult questions, they don’t do their jobs, and they just shut up and smile and maybe laugh whenever the President says something intentionally humorous.

That is the press that Mike Pence wants to see in the country, but that is not the press that the First Amendment guaranteed us. We are allowed, as members of the media, as a public, to get information from this administration. Not to mention the fact that Pence is flat out lying, not only about what happened when the reporter was banned, but too about the openness of this administration.

We have gone months at this point without any kind of press conference from the Pentagon, so we don’t know what the hell the military’s doing. They have forbidden other government agencies, Parks, EPA, Interior Department, from actually being able to give interviews to the press. They’re not allowed to anymore, unless they get it pre-approved by a higher up in the administration. Whereas in the past, they get asked to do an interview, they could just do it. This administration is more shut off than other administration, at least in my lifetime.

But let’s get back to Pence’s claim here, that she was being uncivil. She wasn’t recognizing the decorum of the White House. First and foremost, that’s not true. Every reporter that was in that room admits that, no, she wasn’t out of line, she wasn’t yelling. And if she was, it’s only because all of the other reporters were also yelling questions. She did not do anything out of line, did not break any rules, was not becoming uncivil, they just didn’t like what she had to say.

So, are we going to take the word of the reporters that were in the room with him, or are we going to take the word of a guy like Mike Pence, who believes that Donald Trump is the most honest person to ever walk the face of the earth? I’m going to go with reporters on this. Yeah, I know they’re corporate media and most of them are probably pretty bad, but still, they have just a little bit more credibility at this point than a guy like Mike Pence, when every other word that he said in that interview was an absolute lie.

But that’s what Mike Pence does. He lies, he covers up, he tries to misdirect things and say, “No, we love the press, as long as they observe the decorum of the White House.” Decorum that I’m pretty sure kind of went out the window 20-30 years ago, at this point.

Yeah, that once was a haloed office, where only the best and brightest of this country ever got to see the inside. But decades ago, all that changed, right? The White House isn’t as prestigious as it used to be. You know, we’ve had some pretty disgusting scum bags coming in and out of that place, and I think the day that Kid Rock stepped foot in that oval office, yeah, that pretty much killed any kind of decorum or sense of class that the oval office actually had.