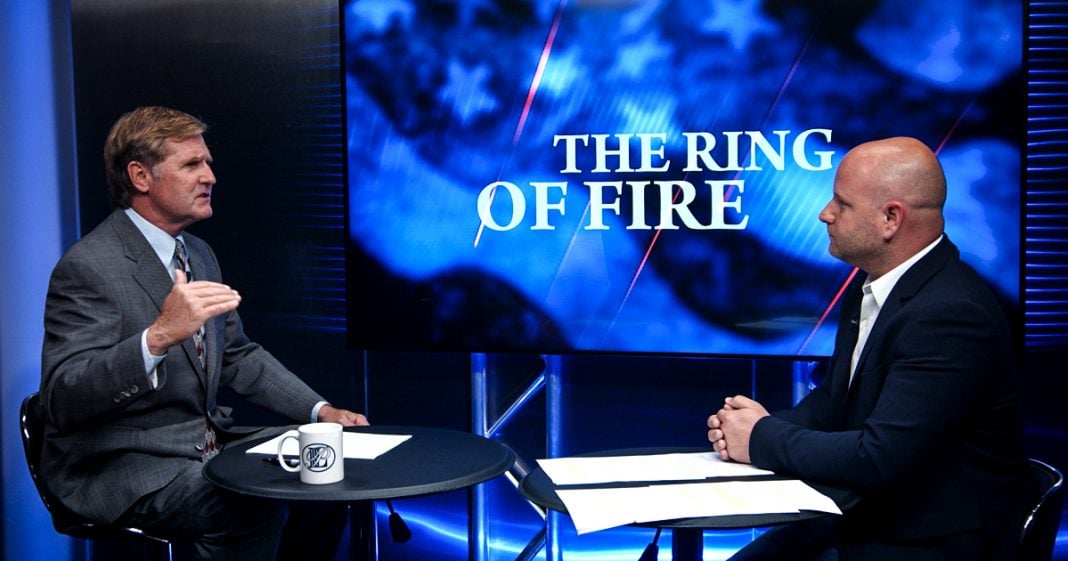 The Bayer healthcare company has announced that they will stop selling their controversial birth control treatment called Essure – the company says its because it wasn’t selling well, which is likely because it was destroying the lives of women. Ring of Fire’s Mike Papantonio and Farron Cousins discuss this issue.

Click here to learn more about the dangers of Essure.

Mike Papantonio: The Bayer HealthCare companies announced that they’re going to stop selling their controversial birth control called Essure. The company says it’s because it wasn’t selling well, which is likely because it was destroying the lives of women all over the country. That’s really why they’re doing this.

This is a simple story to understand, okay? This company, Bayer, has made this product. They know it’s a birth control, it’s totally and unnecessary birth control. There are more birth controls out there that whatever the problem is that a woman is having with a particular kind of birth control, there are other alternative out there for them.

Essure was one of these lookalike kind of deals. Other people are doing something similar, we want to try this ourselves. Now what they’re finding is the Essure that’s embedded in the body is breaking off in the body, migrating throughout the body and causing real serious injuries to people. That’s why they’re pulling the product from the market.

Farron Cousins: It absolutely is and now they’re saying well, this cash cow stopped giving us milk. It has nothing to do with these 16,000 lawsuits we’re facing over this product in the US alone. No, no, no, it’s because it wasn’t selling well. And there’s a reason. It’s because, as you just pointed out, it’s destroying the lives of women like so many other products that we see.

Essure is a permanent form of birth control. It’s this implantable device and just like every other implantable, small, metallic device we see in bodies, it breaks apart.

Mike Papantonio: Same kind of deal. Breaks apart, moves systemically through the body. Lodges in organ systems, including the brain, by the way. The heart. This is the same problem here with Essure. They knew. They’ve known the science of implant fracture for ages. They know the science on it. They know it’s bad. They know there’s never been a good experience with this.

Farron Cousins: Due to the location of the device in the Fallopian tubes, most of the injuries that they’re seeing involve, there’s a lot of kidney damage, a lot of abdominal pain, because usually when it breaks off it’ll embed almost immediately wherever it can get to. Sometimes it will migrate. It will go to the brain. It will go to the heart. If you’re lucky enough, it’s not going to go there and immediately kill you. Instead, it’ll ruin a kidney.

Farron Cousins: It’ll ruin a bowel, a bladder. Anything it can latch itself onto and Bayer knew it.

Mike Papantonio: Actually pierce the bowel. That’s one of the bigger problems.

Mike Papantonio: Let me tell you a quick story. I think this is pretty instructional about Bayer as a company, generally. I’ve been toe to toe with Bayer on several occasions that’s the same culture. It is a culture of, we want to follow the cash cow. We’re going to make as much money as we can. We’re going to leave what I call quick profits, horrible risks. Quick profits for the company, horrible risks for the consumer.

This was in the Yaz case. This woman that was testifying on Bayer, her name was North. She was the number three PR person for Bayer. Her job was to go across the country telling the story about how noble Bayer was. Talk about the actual character of Bayer, which in a civil suit, it’s important to know, character of either party is never at issue. You don’t allow character into a discussion. If somebody robbed a bank years before, yeah, maybe that comes in, but general character doesn’t come in.

Okay, so she testifies, Farron, and I think you’ve seen this. I actually put it in one of the books, the first book I wrote called, Law and Disorder. It was a book about the Yaz case and several other cases. A fiction. It’s a fiction book, but this is a true part of it. Where I have her on cross-examination, I said, “Mrs. North, now you’ve been testifying here about what a wonderful corporation this is, their honesty. You testified about their integrity. You testified how they just do things right and they always have the consumer in mind and they would never…” Basically her bottom line, we would never do anything wrong. We would never hire people who do things wrong. That’s the catch.

So first of all, she’s lying about Fritz ter Meer. The real story about Fritz ter Meer is that Bayer was so up to their eyeballs in the Nazi movement in the second World War that they actually designed gas to kill people. Those same people who did that went to work for Bayer after the war.

So it was a startling moment. It was the kind of moment where you go, well it was so startling that when it came up right before trial, they settled the case for all of the Yaz cases throughout the country.

So this’ll be another opportunity to tell that story in the Essure Case.

Farron Cousins: Well you know, I think there’s also another part to that story, though, because if I remember correctly and I could be wrong, so feel free to correct me, but wasn’t this Yaz, ’cause I was here with you, wasn’t that the story that when it first came out was pitched to the New York Times-

Farron Cousins: … and the New York Times, after kicking it around for a few months, “Oh, we’ve got this reporter. They’re working on this great, great, great story. This is going to be huge, we’re going to blow it out of the water.” Publication day came and they said, “We can’t. We don’t want to ruffle any feathers.”

Mike Papantonio: Exactly right. It’s worse that that. It was actually, I was actually working as a contributor for MSNBC. Not regular, but I was a contributor. I would appear once every couple of weeks until I went to work with Ed Schultz. When he had his show, I would be there sometimes two or three times a week. But I remember pitching this story and the producers couldn’t do the story because the advertisers wouldn’t let them.