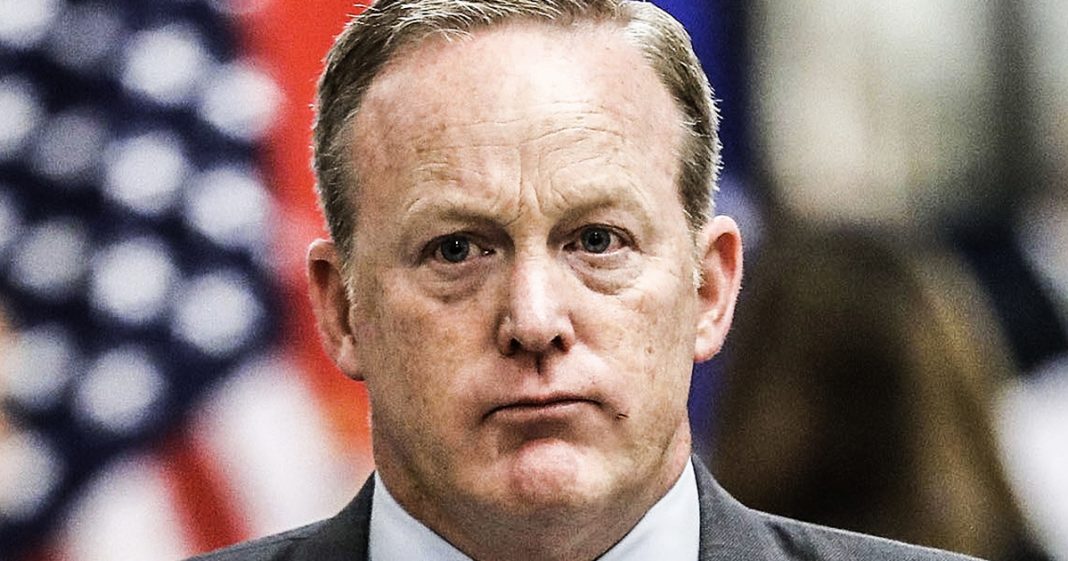 Former White House press secretary Sean Spicer’s new book is making headlines again, but just like last time, for all the wrong reasons. Spicer’s book is packed to the breaking point with lies and inaccuracies, including getting the names of basic players in DC wrong, like the name of the Steele Dossier creator. But Spicer insists that it is all true, proving that working for Trump didn’t make him a liar – he’s always been and always will be a liar. Ring of Fire’s Farron Cousins discusses this.

Sean Spicer’s new book, The Briefing, came out this week and as pretty much every single person in the country expected, it is filled with lies, falsehoods, inaccuracies but more importantly, blanket stupidity. Page to page. Sean Spicer, the former White House press secretary, proved in his book that he is an absolute moron.

The reason I say lies and inaccuracies and not just all lies, is because I think with Sean Spicer it’s not just that he’s lying all the time, it’s that he’s so painfully stupid that he doesn’t necessarily know that he’s lying. It’s not malicious, it’s unintentional because the man needs psychiatric help.

Here’s one of the things that he got wrong in his book. He refers to the Steele dossier that thing that Republicans like to tell us has been discredited even though so far every claim in it that’s actually been investigated has been proven true. He says that the author of it was not Christopher Steele, the former ex-Russian spy, he refers to him as Michael Steele. And for those paying attention at home, Michael Steele actually happens to be the former chairman of the Republican National Committee. The head of the Republican party. He couldn’t even bother to get the man’s name right. Christopher Steele, not Michael Steele.

Somewhere along the path of editing, which I would have to assume happened, nobody else caught that either. Or do you hate Sean Spicer enough that you were like, hey look at what this dumb ass did here. I’m going to let it go. I’m just going to let it go to print ’cause he’s an idiot. I’m hoping that that’s what happened. In fact, that whole scene that I just did right there, that’s playing out in my head so beautifully and I hope that’s what they did to Spicer.

It goes on. Another inaccuracy that the Hill describes that was in the book was Sean Spicer referring to a White House press conference that Barack Obama held in 1999. 1999, almost 10 years before Barack Obama even became President of the United States. He somehow managed to give a press briefing that nobody else knew about. Didn’t know it existed. It didn’t surface in any of the campaign attacks on Barack Obama. Somehow managed to go back in time and give a White House press briefing in 1999.

Spicer also talks about the time that he spent working for former Republican congressman Mark Foley. Talks about how he’s a great guy and was just great with everybody. Doesn’t for once mention the fact that Foley resigned in disgrace after it was revealed that he was messaging young, young, young, young boys online trying to get naked pictures of them.

Spicer has proven with his little book here, one, that he is painfully ignorant and nobody should take him seriously. But two, that working for Donald Trump did not make him a liar. He was a liar long before he came into the Trump administration. He’s a liar a year after he left the Trump administration and this man is going to be a liar for the rest of his life.