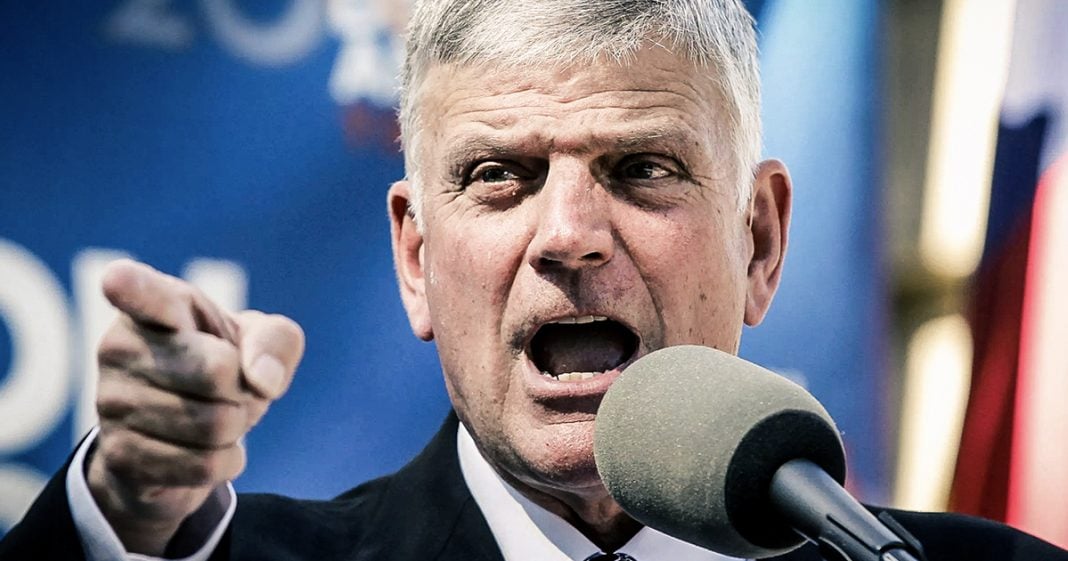 Right wing evangelical pastor Franklin Graham, the son of the late Billy Graham has some advice for those in the media who keep talking about Donald Trump and his affairs with porn stars and Playboy playmates. He says that if you continue to talk about these things and talk about the payoffs that he made, then you are going to feel God’s wrath. That’s right. According to Franklin Graham, God is getting super pissed about all of us talking about how horrible Donald Trump is, what a womanizer he is, the potentially illegal activity he engaged in to cover all this up. That makes God mad, so sayeth Franklin Graham. Not the acts themselves, God’s totally cool with that, probably would high five Donald Trump if he got the chance, right Franklin? But no, it’s the people talking about it, trying to make it an issue. We’re the problems and we’re the ones who should fear God’s wrath.

Here’s a couple of tweets that Mr. Franklin Graham sent out recently explaining this. “Everyone in the media is talking about the just released tape and what the president said or didn’t say. What he meant or didn’t mean. It is a good moment to point out that everyone should realize that every word that is spoken or thought is recorded by God.” God’s basically a much more powerful version of Michael Cohen, I guess. He continues, “The Bible said it is appointed unto man once to die and then the judgment. We won’t be judged by media spin masters or forensic audio analysts, but you will be judged by truth and righteousness by God himself. Have you ever thought about what his verdict will be on your words?” I would hope, personally, that God would say to me, “Hey, good job calling out those in power who are screwing over those without power.” That’s pretty much what the entire Bible was all about and thank you for actually doing what the Bible said.

But I have a question for you, Mr. Graham. If you have indeed read the Bible, you know that the one thing that pisses God off more than anything is false prophets. You know, and that’s exactly what you are. You’re a charlatan. You’re a liar, you’re a hypocrite because you were very, very interested in Bill Clinton’s sex life in the 1990s. But now suddenly it’s off limits when we’re talking about even more illegal activity than what Bill Clinton did? These evangelicals have no ground to stand on anymore. They have no credibility whatsoever and anyone in this country that believes a word that Billy Graham, or Franklin Graham, excuse me, any one of these assholes out there has to say, is absolutely following these false prophets straight to hell.