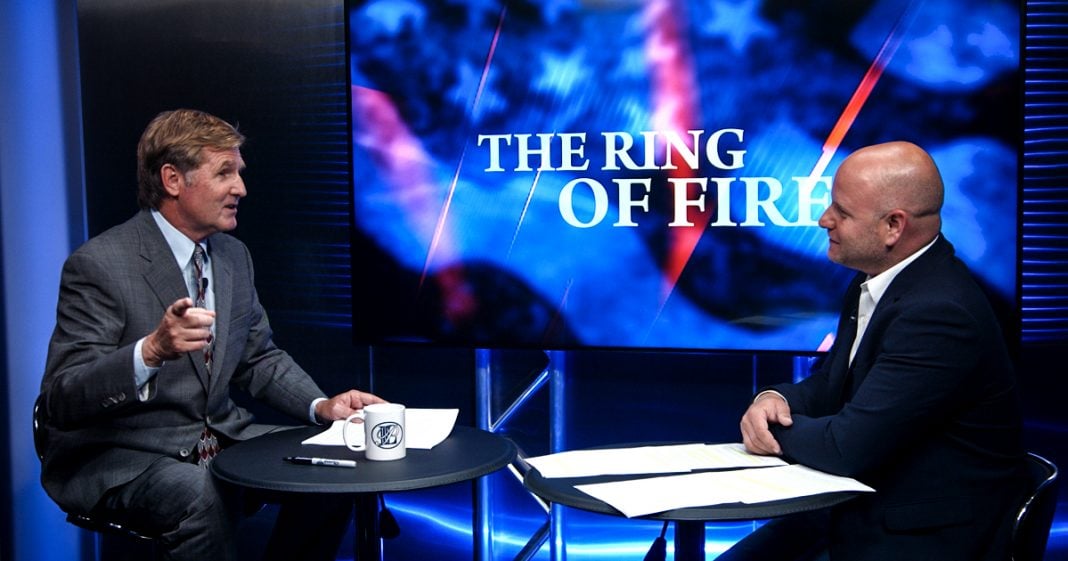 Farron Cousins: Not only has Geithner become one of the jackals, he has revolutionized these predatory payday lending scams because, rather than set up these rundown offices in the poorest parts of neighborhoods like the cash advance, things like that that we’ve seen in the past with predatory lenders, he has tried to make it into more of an upscale venture. He gives out larger loans, higher interest rates, but larger loans for more money. Now what he and Mariner are doing, which they now have 450 branches in 22 different states, they’re just … and I wish there was a more sophisticated way to say this, but there’s not. They’re just mailing checks to poor people hoping that the poor people cash the check so that they can catch them, and now they’ve got them in this loan that this person may not have known. Plenty of times-

Mike Papantonio: They do background checks. They see, sometimes, that the person may have equity in their home. They do all their homework, but the person is living subsistence existence, barely making payments, barely staying alive, and the Tim Geithner crew … Tim Geithner, Obama’s financial guy, now says, “Well, I got a good idea. We’re going to mail them a check, and if they cash it, we got them.” Isn’t that it?

Farron Cousins: Here’s what they do as well. This is part of the scheme. They go through, they look through hospital billing databases, they look through any kind of car repair database, anywhere where you’ve given your name and phone number, things like that. They can see who gets popped with a big bill.

You just had a surgery. Your insurance covered most of it, but now you have a hospital bill for $5,000. Couple days later, a $5,000 check shows up, and you say, “Okay, well, I could really use this right now to pay this and be done with it before that goes to collections.” They also work with collection agencies to find out who owes what, so it is very targeted. It is very sophisticated. These checks do not come with very much explanation, a little bit of fine print that nobody reads. They think, “Oh, well, this is a good thing. I’m probably 5% interest, better than a credit card.” Reality, almost 40% interest on these things, and they lock them in, and then-

Mike Papantonio: Yeah. As a matter of fact, let me just tell you something. Finally, the king of predatory lending went to prison, one of the kings. Now there’s so many out there right now. Now the new king is Tim Geithner. Okay? This is the DNC golden boy who is now running this pathetic, ugly scam.

Let me back up just a second. Before they send the check, they have abilities to find out everything they want to about you. They can find out where do you shop? What do you buy? Who do you owe money to? Are you behind on your rent? Are you behind on your house payment? They do all of that, and they target. They have a matrix that targets this is the right person. This person hits all of the matrix just right. It’s like throwing a dart and hitting bull’s eye. You’re a bull’s eye. You owe the hospital $5,000. You can’t pay it. You get a $5,000 check, and they’ve got you for the rest of your life.

Farron Cousins: Right. These are people who would not ordinarily even consider doing one of these payday loan scams, but when you’re sitting there, and you’ve got that check in your hand, and you know all you have to do is sign the back of it and it’s in the bank, and in the other hand you’re looking at that bill, and you’re getting the phone calls from the debt collectors, this check is a lot more likely to get cashed than if you had to get in your car, go find one of those lending places, hand over your car title or whatever it is. Tim Geithner should be in prison. Tim Geithner should be in prison. That’s the bottom line here.

Mike Papantonio: Yeah. I saw a great article that basically said that what’s happened to the Democratic party is the new face is Wall Street contrasted with the face of Maxine Waters, crazy woman. It mean that’s how they … It was really well done. It was well thought out. It was well presented. That’s really what it is. I mean you’ve got these Wall Street Tim Geithners now in charge of the Democratic party, and on the other side you’ve got … I don’t even know how to describe it, it’s gotten so crazy.

Corporate Democrats recently held a private conference to figure out how they could stop the party from moving further to the left and further away from the very kind of corporate control we’re talking here. This meeting, I got to tell you, didn’t go well, did it?

Farron Cousins: I think the biggest takeaway from this meeting that took place in Ohio, last Friday I think it was, is this quote from Representative Tim Ryan. He’s a Democrat from Ohio. He said, “You’re not going to make me hate somebody just because they’re rich. I want to be rich.” Okay. Tim doesn’t understand. Mr. Ryan here completely misrepresented what the anger in this country is about on both the right and left. Nobody is mad at anybody for being rich. Nobody is mad at Jeff Bezos from Amazon because he has money.

Mike Papantonio: They’re mad because he’s a thug. I mean-

Farron Cousins: Yeah, they’re mad because his workers have to pee in jars because they can’t get breaks and they make slave wages. They’re mad at Disney because they get billions of dollars while their workers are living in their cars. It’s not that you have money. It’s that you’ve screwed over thousands of people to get it. These Democrats, which this was put on by Third Way, that centrist think tank, they put this meeting together because they said, “Wow, we have a real problem with people in this country wanting …”

Farron Cousins: Well, real quick, what’s happening too is we see too many Republicans out there warning the Democrats, “Don’t move to far left,” because those Republicans are disaffected by Trump. They want to remake the Democratic party into the new Republican party.