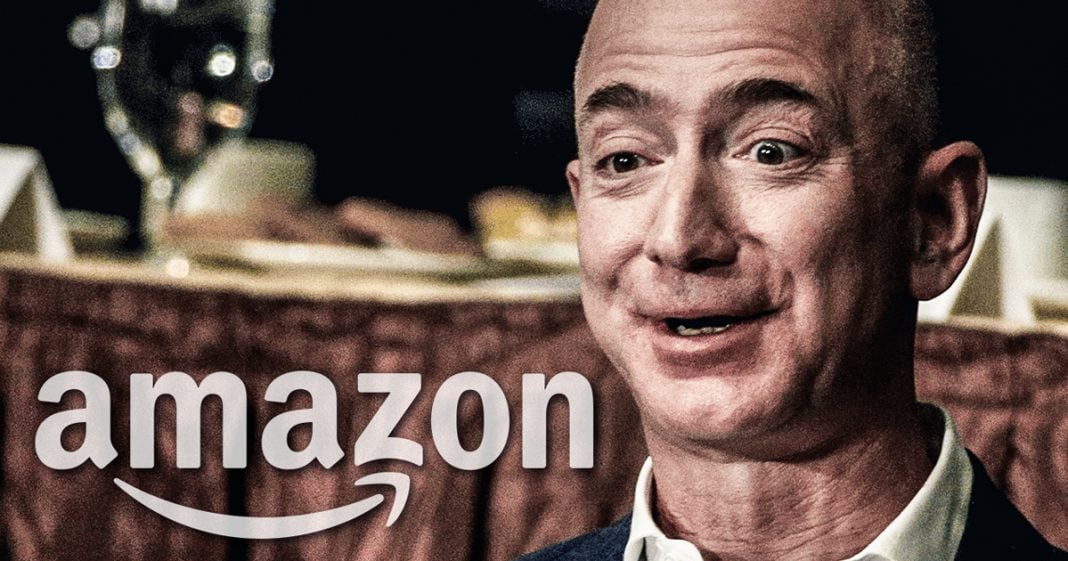 Amazon pulls in quite a bit of money from people buying everyday items from their website, but what most people don’t understand is that Amazon is also a top defense contractor for the federal government. In addition to supplying servers for the Department of Defense, Amazon is also supplying surveillance tech to ICE to help them track down immigrants for deportation. Ring of Fire’s Farron Cousins discusses this.

Recently, the news organization Truthout printed an interview between Truthout reporter Sarah Jaffe and Cata Santiago, who is with the group Movimiento Cosecha. Basically, what Santiago described, the movement that this group is currently working on is getting people to understand the fact that Amazon is actually working with ICE to help round up people for Donald Trump’s mass deportations that he wants this country to begin engaging in.

Amazon, the site that most of us go to a couple times a week to order basic necessities that we don’t feel like running to the store, maybe they’re cheaper on Amazon. Not only are we supporting that company and the richest man in the world, Jeff Bezos, but apparently by purchasing from Amazon, we are also helping this horrible immigration policy put forward by the Trump administration.

I say, “We,” because I’m guilty of too. I’m an Amazon shopper. Why? It’s cheap. I can’t afford, always, to go buy more expensive products at a local store, just like most Americans. It is a horrible cycle of capitalism here, right?

We don’t make enough money, so we have to go to the cheaper options. Unfortunately, a lot of times the cheaper options are things like Walmart or Amazon or places like that. These big box stores that drive local retailers out of business because we can’t afford to purchase from there because we have to work at these crappy places that pay us slave wages, like Amazon and Walmart. And the cycle continues. It perpetuates itself here.

Unfortunately, in this particular instance, supporting Amazon means supporting ICE and supporting mass deportations. What’s happening, according to Santiago, is that Amazon … and a lot of people don’t realize this … Amazon is a massive defense contractor for the United States. They provide the servers that defense department, that the Pentagon uses. They are massive in their military contracts, and that’s where a lot of their money comes from. But they’re also selling surveillance equipment to ICE, and that surveillance equipment is what is being used to track down immigrants in the United States, throw them in a prison, give them a sham of court hearing and then sending back from wherever they came from. Unfortunately, they’re right. If you support Amazon, you’re supporting this.

It is hard, as I just pointed out, to be a conscientious consumer here in the United States today because of this cycle of capitalism that we have. You get paid low wages. You have to buy the cheaper stuff. Well, you buy the cheaper, you got to go these crappy companies that pay their employees crap while they’re making billions upon billions of dollars. But it’s because you can’t afford to do the other stuff, and so that cycle continues.