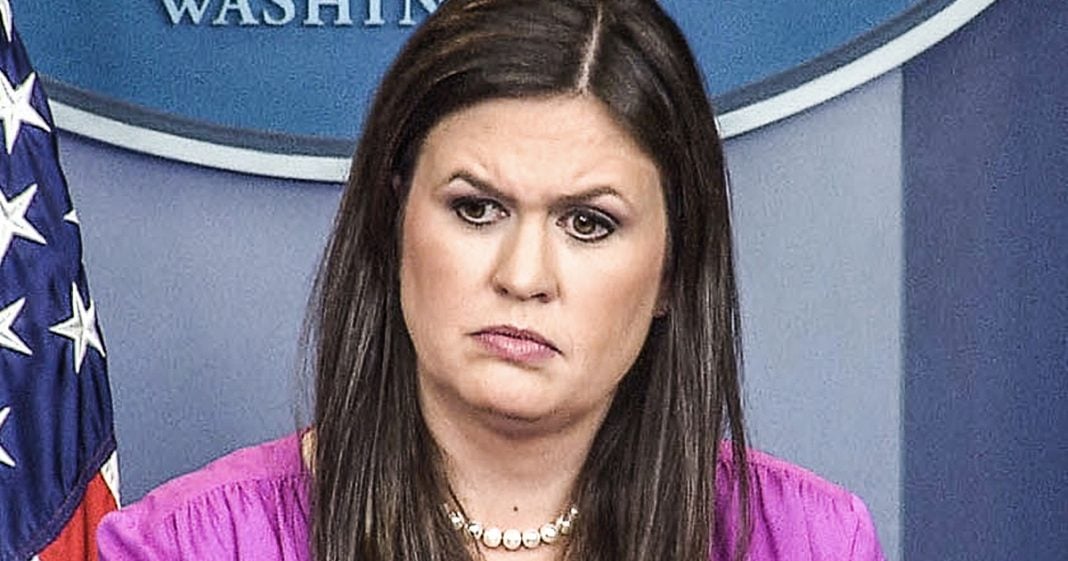 According to a new report by Politico, White House staffers are already preparing for what their lives will be like when Sarah Huckabee Sanders finally quits, and they already have a list of replacements in mind when the day finally comes. The problem is that they have no idea when it is coming, but they all know that it is definitely going to happen. Ring of Fire’s Farron Cousins discusses this.

Sarah Huckabee Sanders, about a month ago, absolutely denied 100% that she was trying to find a new job or looking for an out from the Trump administration. Nobody really believed her because we can’t ever believe anything that this woman has to say. And now, according to new reports and interviews from Politico with current and former members of the Trump administration, that people inside the White House are already preparing for her to leave at any moment.

Most of this happened when Bill Shine, the Former Fox News Executive that turned his back to all of the sexual harassment happening at his network, when he became the Communications Director for the White House. Bill Shine came in and started preparing a shortlist of people who could potentially replace Sarah Huckabee Sanders. He’s also trying to figure out how to navigate in case she just suddenly leaves tomorrow, or the next day, or any minute now.

But here’s the biggest problem. According to the people that have been interviewed by Politico, who know what Bill Shine is doing, every single person with the exception of one, that is being considered to replace Sarah Huckabee Sanders, is a former Fox News Host, in some way, shape, or form. Here is the shortlist here. Heather Nauert, she’s the current State Department Spokeswoman and a former Fox News Host. There’s Bill Hemmer, a Fox News Reporter. Kimberly Guilfoyle, who as we all know, is Donald Trump Jr.’s girlfriend, and also a former Fox New Host, who was let go last week.

Treasury Department Spokesman Tony Sayegh, who worked closely with the White House on its overhaul of the tax code and who used to be a Fox News Host. And then of course, the one who wasn’t a Fox Host was Deputy White House Press Secretary, Raj Shah. So I think Shah probably has zero chance of getting it when you have a former Fox News Executive who’s only thinking about former Fox News Hosts and Raj Shah. Raj Shah has no chance whatsoever. What they’re trying to do and what Bill Shine is trying to do, according to the people interviewed by Politico, is that he wants a White House Press Secretary that has some respect among the media. And that is a smart tactic, it’s what George W. Bush did when he appointed Snow as his Press Secretary.

But here’s the other thing. If you want your press secretary to have some respect and support among the actual press that they have to meet with every day, perhaps don’t pick somebody who’s, one, a serial liar, like Sarah Huckabee Sanders and Sean Spicer were. And two, somebody who, like Spicer and Huckabee Sanders, bullies the press at every given opportunity. If you want respect, you have to give respect. And that doesn’t seem to be something that anyone in the Trump administration actually understands. But that’s how the world works.

Trump hasn’t had to do that in his life because he’s bullied enough people to respect him without giving them the decency of respect in return. Huckabee Sanders thought she could come in and do that and wound up being one of the most hated press secretaries of my lifetime. And she deserves it. I do not feel any sympathy for Sarah Huckabee Sanders. I do not feel bad that she’s wanting to get out because it’s just so horrible and she can’t even go to a restaurant without being kicked out.

That’s what you deserve. Because when you’re a horrible human being, horrible things happen to you and you rarely get the opportunity to be happy. The only person who can turn that around, Sarah, is you. You can quit your job tomorrow. They’ll replace you with any Fox News host they can find stupid enough, willing to take that position. But at the end of the day, the horribleness of your life is 100% your own creation.