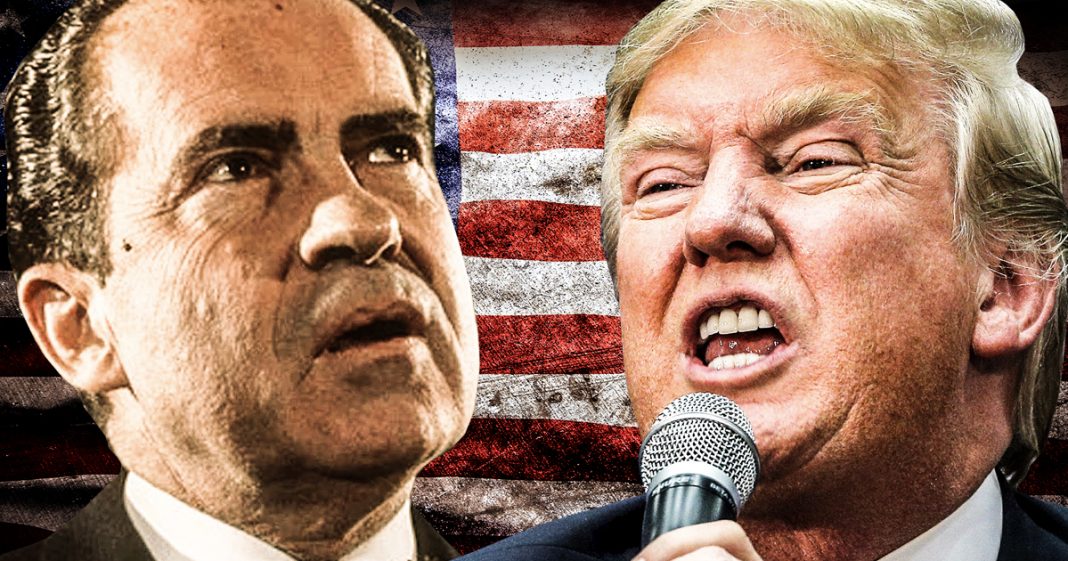 If you took Donald Trump’s word for it, you’d likely believe that the entire Mueller investigation was a politically-motivated witch hunt put together by a depressed and despondent Democratic Party. But if you know your history, then you also know that Richard Nixon tried the EXACT same tactic against the Special Prosecutor’s office investigating the Watergate scandal, and Trump’s attacks on Mueller and his team are likely to end the same way they ended for Nixon. Ring of Fire’s Farron Cousins discusses this.

Donald Trump’s strategy to fight back against Special Prosecutor Robert Mueller and his team of attorneys seems to be to basically discredit intelligence agencies here in the United States, discredit Robert Mueller, attack him as a partisan hack and say that his special prosecutor’s team is packed with partisan democrats. Well, it may play well to your republican base. I mean, I have seen people on Twitter talk about the 18 or 25 angry democrats that are a part of Mueller’s team even though Trump says there’s only 13 angry democrats. These idiots have taken and upped a number and upped a number again. None the less, I wasn’t alive during the time of Watergate but I do read and I do understand history and recently there was a great report in NBC News that explained that Donald Trump and his attorney, Rudy Giuliani are literally doing the exact same thing that Richard Nixon did against the special prosecutors investigating him right before Nixon resigned.

You see Nixon was facing not Robert Mueller but a man named Archibald Cox and though he ended up firing Cox, in the weeks and months before he fired him they were threatening him. They were telling the public that he was a partisan hack who was only out to serve his own party. They were telling people that this was a witch hunt. I’m sure we’ve all seen the old photos of those headlines, “Nixon sees Witch hunt”, a phrase that Donald Trump also likes to tweet out constantly. So, Nixon eventually, in the Saturday Night Massacre, ends up firing Cox but then was forced to appoint a new special prosecutor who then began the indictments and trials of Nixon’s closest aides which then presented a massive packet of impeachment materials to the House and Senate.

When Nixon saw this he decided, “Well, I’ve got no other course of action, I have to resign”. But again, that came after months and months of attacks, calling it a witch hunt, calling it a partisan disaster, attacking intelligence agencies, maintaining his innocence anytime he got in front of the public and saying that this is all made up, this is politics, these people are dirty and it is exactly what Donald Trump is doing right now. I mean it’s almost verbatim. He is using almost the exact same words that Richard Nixon used to describe the investigations against him.

I tell you that story to leave you with a little bit of hope here, okay. A lot of people have been worried that what if Donald Trump fires Robert Mueller. This whole thing’s over, right? No, he can’t just end this whole thing. And furthermore, even if the DOJ says we’re shutting down the special prosecutor’s investigation, all of the evidence that has been collected still has to go to court. They can’t just throw that out or ignore it. Prosecutions will still come they just may not have all the evidence that they wanted. But a judge could also say well, due to this, we’re going to extend it even further. Trump doesn’t have the power, nor does the federal government at this point, to completely shut down this investigation. Furthermore, Mueller has been very smart about this and he’s farming out the prosecutions for the people who have already made plea deals or the people who have already agreed to go to trial. Those have been farmed out to other offices so even if you shut down the special prosecutor, those still happen.

Trump can’t stop this. And that’s why he freaks out so much about it. He doesn’t know what evidence Mueller has, he doesn’t know how many people have flipped on him. At this point, he doesn’t even know who all has flipped on him. The only ones we know publicly, are Popadopoulos, Manafort and Gates. There could be tons more … Excuse me, Flynn, Manafort and Gates. There could be so many more. There could be people working for Donald Trump today that have already turned over information and he doesn’t even know it. That’s why he’s so terrified. He doesn’t know who’s said anything and he doesn’t know what they’ve said. But, much like Nixon, he also refuses to meet with the special prosecutor. He refuses to submit answers to questions from the special prosecutor. Nixon did the exact same thing.

So, with any luck, with a little bit of hope this whole Robert Mueller special prosecutor investigation for Donald Trump is going to end the same way that the Archibald Cox investigation ended for Richard Nixon.