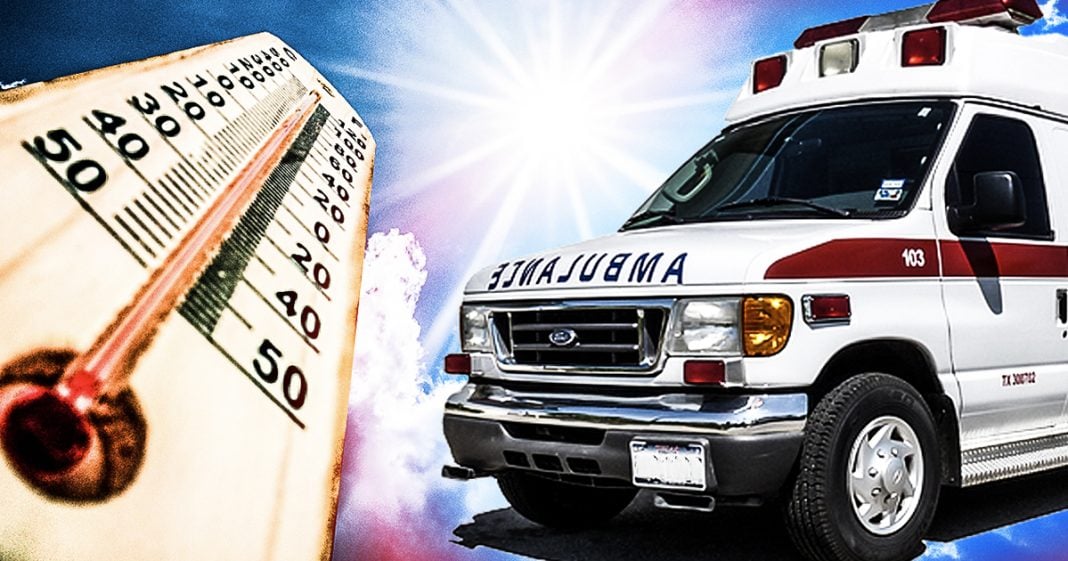 According to a new report from Public Citizen, American workers are at an increasing risk of dying from heat stroke while on the job, and hundreds in the last few years have literally dropped dead at work. The reason this is happening is because corporations don’t care if you live or die, and giving workers more protections will just cost them money. Ring of Fire’s Farron Cousins discusses this.

The reason these people are dying at work isn’t necessarily just because equipment is falling apart, safety standards have been thrown out the windows. No, no, no. We have a very real problem of people dying on the job in the United States from extreme heat.

Here’s a startling statistic from Public Citizen, here. “Approximately 130 million workers around this country lack any protection from a heat stress standards.” So we’ve got 130 million workers in this country, a third of the population, that is not protected in any way from extreme temperatures while they are on the job. 130 million, and it’s because OSHA doesn’t have any kind of requirements for that. They go on, “According to the government, 69374 workers were seriously injured from heat between 1992 and 2016, and 783 U.S. workers died from heat exposure.” 783 American lives lost while on the job, just because of extreme heat. And, because of the government’s failure to do anything about it and to require corporations to take care of their workers.

Again, this affects a lot more industries than just those who work directly in a farm, because a lot of people who read this story seemed to think that’s all who we’re talking about here. No. These are professionals. Some of these are very high paying careers that also happen to do most of their work outdoors, or most of their work in areas where air conditioning is unfeasible because of the size of the operating area. They’re dying.

The big question at this point it, Will OSHA, will the Federal Government finally step in and require employers to do something about the people that are dropping dead at the job? Are they going to continue as they have for years upon years, ignore the problem, pretend it doesn’t exist, and when worker A dies, they just shove their body out of the way so that worker B can move over and take their spot until they also drop dead?

That’s what corporations want. Because any one of them at any point could actually enact their own safety standards. They could say, “Hey, you know what? We have a real problem of people getting heat exposure, heat stroke. Here at the office, we could probably fix that.” But no. Because it costs a couple of dollars. They have to spend a little bit of money. To a corporation, pretty much any corporation in this country, your life is not worth any expense to them.