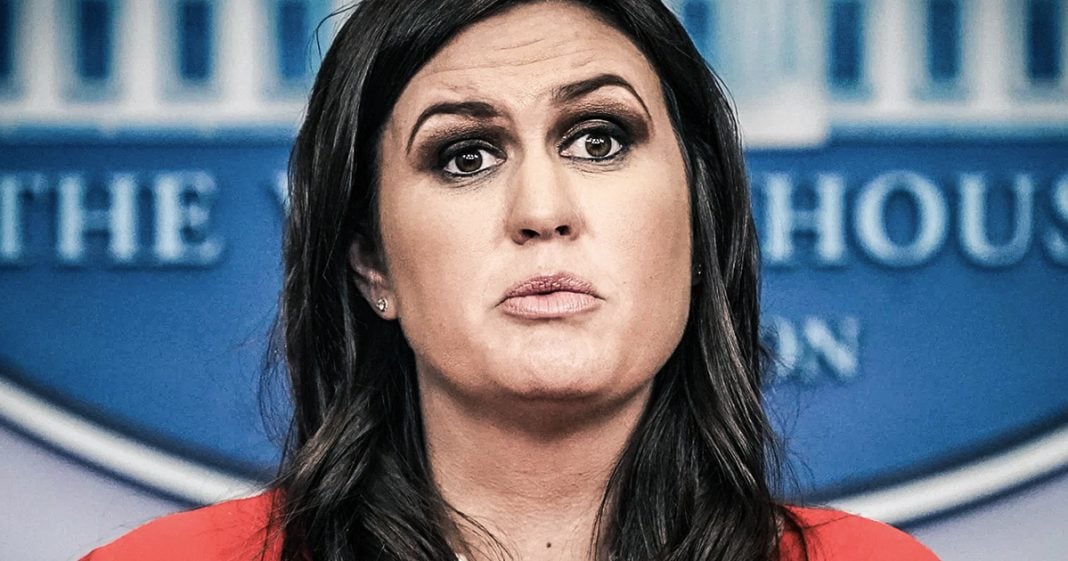 White House press secretary Sarah Huckabee Sanders might seem harmless with her lies and behavior, but what she’s actually doing is helping this administration shred the US Constitution. By lying about the CNN reporter that was banned from a White House event this week, she’s allowing the Trump team to deny very basic 1st Amendment freedoms to individuals. Ring of Fire’s Farron Cousins discusses this.

The White House Press Office is still dealing with the fallout that occurred Wednesday when a CNN reporter, Kaitlan Collins, was asking questions of the President during a Q&A in the White House. What we’ve learned now is that in addition to her being banned from attending an event later on that day on Wednesday, before the banning took place, Ms. Collins was actually taken to a private room with White House Communication’s Director, Bill Shine, and Sarah Huckabee Sanders. It was in this little private meeting that Collins was told that she was going to be banned from attending an event in the Rose Garden later that day. But they assured her, they were not banning CNN. No, they were banning her. Her camera people and producers could still show up, but the on air person who reports on it wasn’t allowed.

They weren’t technically crapping all over the 1st Amendment, right? Sarah Huckabee Sanders later in the day on Wednesday also released a statement saying, “Hey, we had to kick her out because she was being unruly. She was being disrespectful and we have to adhere to a certain amount of decorum and she was just shouting questions, speaking out of turn, wouldn’t leave when we told her it was time for her to go.” The only problem with Sarah Huckabee Sanders’ claim here in this official statement is that it is 100% false according to the other reporters who were in the room. The room was loud, so everybody had to speak loudly when asking their questions. Furthermore, and this is the most important part that blows a hole through Huckabee Sanders’ story, is the fact that the other reporters have said she wasn’t unruly. She didn’t not leave when they were all told to leave. They all left.

Sarah Huckabee Sanders, through her lying, is helping this administration to dismantle the U.S. Constitution, specifically the freedom of the press guaranteed to us by the 1st Amendment. They are restricting free speech by kicking these people out of there. They’re not letting them get the story that everybody else is getting. Huckabee Sanders has become the biggest enabler at the White House to aide in Donald Trump’s destruction of the U.S. Constitution. It’s not just this lie, it’s every lie. It’s everything she says, because at this point, this woman is 100% incapable of ever telling us the truth. When she’s not lying to us, when she’s just straight up attacking the media per Trump’s orders, that is another attack on the U.S. Constitution itself. That is what makes Sarah Huckabee Sanders one of the most dangerous people in this administration. Her lies are not harmless. It’s not just her mocking the press.

It’s her mocking the Constitution and that’s how we have to start viewing this, because that is what this administration has done from day one. It’s what Sean Spicer did and it’s what Sarah Huckabee Sanders is doing and it’s even what Deputy Press Secretary, Raj Shah, has been doing. They don’t care about the rule of law. They don’t care about the protections that the press has from the 1st Amendment. They just know that they don’t like anybody who asks them tough questions about what in the hell is actually happening in this country. Sarah Huckabee Sanders hates that, because Donald Trump hates that.