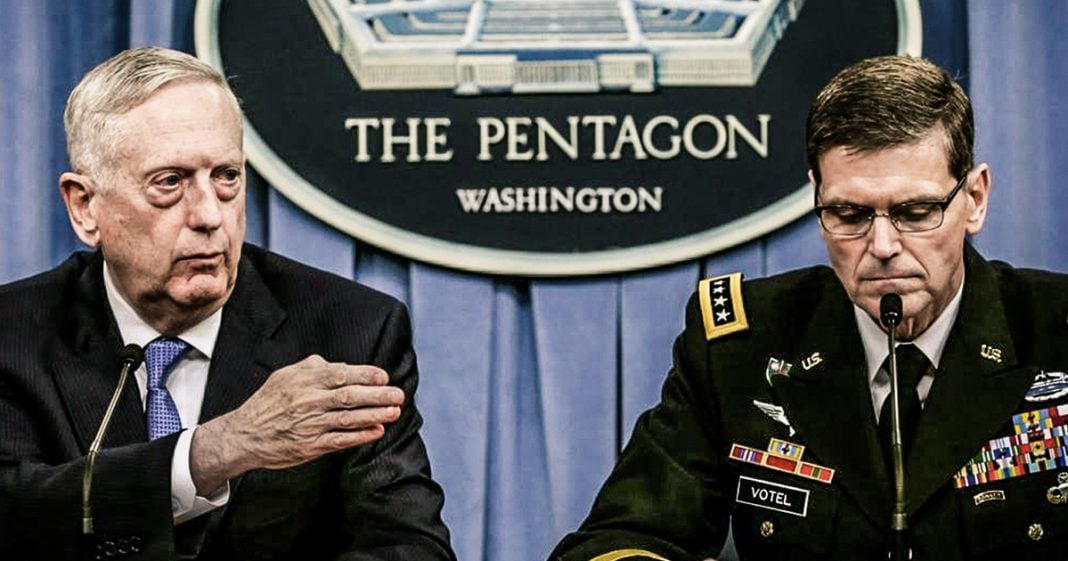 It has been months since the top leaders at the Pentagon have held a press conference, and reporters in the United States are starting to get angry. They want answers about the increasing military activities taking place in the Middle East and the US bombing efforts that are escalating. The war machine is working overtime right now, and most Americans don’t even realize what’s happening because there is no transparency in this administration. Ring of Fire’s Farron Cousins discusses this.

It has been months since any member of the top brass at the Pentagon has given a press conference or really even spoken to reporters. Now, there was a conference with the secretary of the army or the army chief-of-staff back in mid-July, but the only thing they allowed reporters to ask questions about was the location of a new command. Reporters who are in charge of Pentagon affairs and reporting on what our military is actually around the world doing are complaining about the fact that right now, more so than at any other point in their careers, they cannot get anyone from the Pentagon to actually answer their questions, one, about how many countries the US is bombing and, two, about how many bombs are being dropped all over the planet by US forces.

The biggest thing right now is that this administration has closed off as many government agencies as possible so that the American public can’t understand what’s happening. None of those has bigger consequences than the fact that the Pentagon is shutting out reporters. We have a right to know, as a country, how many other countries we are bombing.

According to reports, the US is dropping hundreds of bombs every single day, possibly even more than that on average. Those bombs come from somewhere, by the way. The US military does not make those. Private corporations, defense contractors make those. Right now, they are making a killing, both figuratively and literally, on the amount of weapons that they are selling to our military. They know that the military budget just got increased by 80 billion additional dollars, and they want to get their hands on that. It makes things a little bit harder for them to do that when the American public becomes aware of just how militaristic we truly are as a nation.

Most people think that right now the US military is just over there getting rid of ISIS. Hell, Thursday morning, Vice-President Mike Pence tweeted out, “Great news. We got ISIS on the run. We’re bringing freedom everywhere, right?” No. What’s happening is that we’re indiscriminately bombing countries all over the globe just to benefit those defense contractors, the people who really call the shots with our military. Those defense contractors give big bucks not only to corporate media, but to our politicians. Therefore, they are able to control both of those. That is why CNN is one of the biggest pushers of corporate funded warfare in the United States. They know that if the word gets out about what’s actually happening with our military, things are going to look pretty bad for them. That’s why reporters are being shut out.

We don’t need to know about the death and destruction that we’re causing in other countries. We just need to understand that the USA is number one and to question that is completely unpatriotic. You don’t want to be unpatriotic, do you? So, keep your mouth shut and don’t worry about how many non-white people we’re killing all over the planet. That’s the message basically coming out of the Pentagon today.