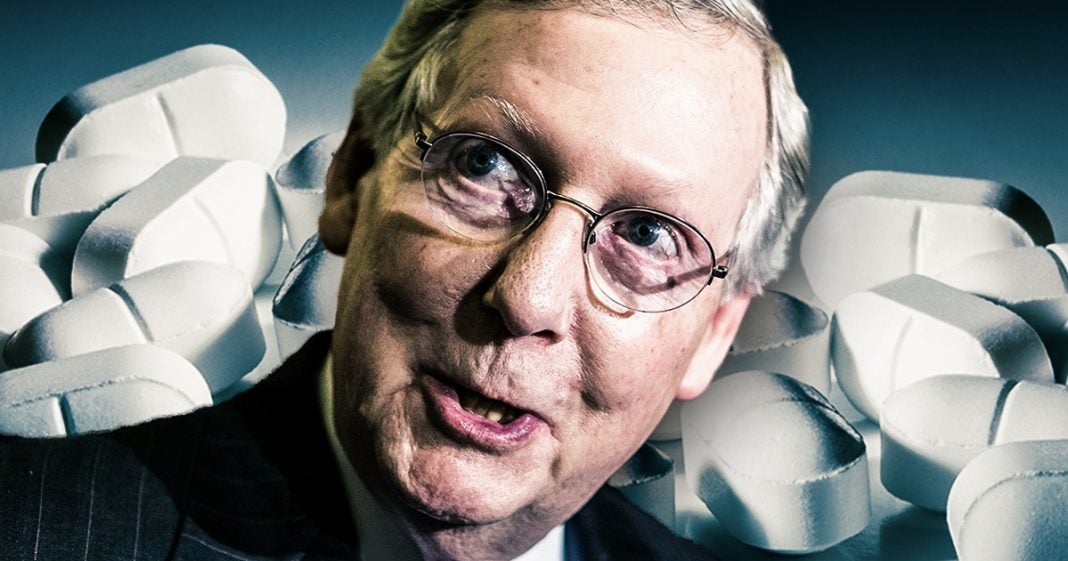 The rumblings from the medical community, as well as on Capitol Hill, suggest that Republican Senate Majority Leader Mitch McConnell is intentionally stalling legislation to tackle the opioid crisis so that vulnerable Senate Democrats can’t take a victory back to their constituents before the 2018 midterms. McConnell is desperate to hold onto the Senate, and he’s putting thousands of American lives at stake in his quest for power, as Ring of Fire’s Farron Cousins explains.

At this point, you would be very hard-pressed to find a single person in this country who would say that we do not have a problem with prescription opioid medications and the deaths that are resulting from the over-prescribing of these opioid medications. So, it makes you wonder, right, why we’re not seeing any action whatsoever from Congress. I mean, the House of Representatives a while back actually passed a measure to help the opioid crisis. They’ve just been waiting for weeks or months at this point for the Senate to do the same thing, so that they can get a bill to the President of the United States.

Well, according to a recent report by the Washington Post, the consensus among health experts here in the United States is that the reason the Senate has not put forth legislation to address the opioid crisis is because Mitch McConnell doesn’t want to, at least not yet. You see, the general belief among reporters and experts and industry officials who have dealings with the Senate is that Mitch McConnell is intentionally delaying and stalling any Senate efforts to address the opioid crisis in the United States until after the midterm elections.

Why? Because he is afraid that if they do it now or if they do it before the midterms, it’s going to allow vulnerable Democratic senators to go back to their constituents with a win, particularly the people he’s afraid of getting a win to are Claire McCaskill from Missouri, Joe Manchin of West Virginia, and Joe Donnelly in Indiana, and here’s the thing about all of those Democrats. Not only are they very moderate Democrats, they also happen to reside in states that have been hardest hit from the opioid crisis, especially Joe Manchin, the corporate Democrat from the opioid-riddled West Virginia. If he were to go back with a victory and say, “Look what I’ve done to my state, for my state,” same thing with Claire McCaskill or Joe Donnelly, it would increase their chances of reelection this year, thereby ending Republican hopes of getting a stronger majority in the Senate.

Some issues, McConnell, you need to understand this, are bigger than politics, and if you’re the kind of human being that wants to play with people’s lives because you think it’s going to benefit your career personally, then you’re the kind of human being that doesn’t deserve to be serving the American public because you’ve forgotten what that means. 170 people every single day, upwards of 42,000 people per year dying, and Mitch McConnell’s okay with that as long as it helps Republican keep a majority in the Senate. I want everyone to remember that when they head to the polls this coming November.