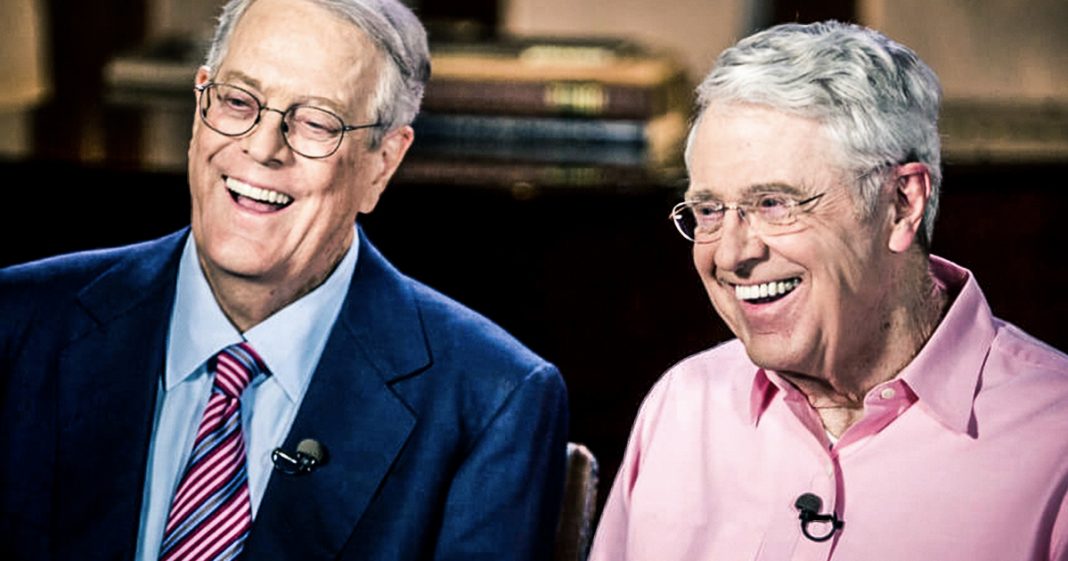 The Koch Brothers, via both direct contributions, front groups, and their PACs, have launched a multi-million dollar effort to remake the justice system in the United States. This campaign is aimed at getting Brett Kavanaugh confirmed for the Supreme Court as well as to get corporate-friendly judges placed on the bench all over the country. They are also trying to purchase a few state Attorneys General, just for good measure. Ring of Fire’s Farron Cousins discusses what this will do to our justice system.

With the 2018 Midterms right around the corner, everybody in this country kind of focusing on what’s gonna happen in 2018, it is officially election season now. And as always, whenever it’s election season, that means that there is a hell of a lot of corporate money being thrown around to candidates that you have probably never even heard of. And as usual, the main suspects here giving so much money are the Koch brothers.

Recently the Koch brothers, through their Americans for Prosperity front group, announced that they were launching a new multi-million dollar campaign giveaway basically, so that they could remake the court systems in the United States. That’s right, the Koch brothers aren’t content just owning all of our politicians, now they’re going after the courts. And actually, this is something they have been doing for many, many years, but because it’s the court system nobody every pays attention.

Here’s what is happening so far in 2018 from Koch brothers, now this is money that’s coming from their front groups Americans for Prosperity, it’s coming from the Koch Political Action Committee, Koch-PAC, and it’s coming in direct donations from Koch Industries itself to candidates all throughout this country. But again, we’re not talking about your average, everyday politicians who end up in the news. We’re talking about the people behind the scenes, the people that can actually do something about the rampant corruption in American corporations today.

Here are some of the races they’re charging. For State Attorney General races, Alabama, Arkansas, Georgia, Oklahoma, South Carolina, Texas, and Wisconsin. They have given tens of thousands of dollars total to the Republican Attorney General candidates in those states. Now particularly interesting there is the fact that they’re giving a lot of money obviously to Georgia and Texas. Why? Because according to reports here, in the state of Georgia, Koch employees 8300 people, in Texas 7800 people. Most of their business operations take place in Texas and Georgia, which also happens to be where most of the Koch pollution, most of the Koch violations come from. And if you want to avoid any kind of liability for poisoning people or killing them on the job, then you have to buy off the State Attorney General.

And that’s not the only place they’re targeting here, we also have State Supreme Court Justices that they’re funding in Georgia, and three different ones in the state of Texas. Again, Georgia and Texas, where most of their business is, they’re trying to buy the State Supreme Court. And they’re also buying the State Court of Appeals in the state of Georgia, with $1000 to Justice Steven Dillard.

Republicans for the last 18 months, basically since Donald Trump stepped into office, have been working with conservative outside organizations, like the Koch brothers here funding all these people, the Federalist Society, the Heritage Foundation, to get corporate friendly judicial nominees so that they can vote on them in the Senate, and get them approved, and put the on the bench. Every single one of these people, including Brett Cavanaugh, which by the way Kochs are spending over a million dollars just to get Brett Cavanaugh confirmed to the U.S. Supreme Court. But all of these people, every single one of them, has one thing in common. That is, they consistently side with corporations over consumers. Pro-corporate judges, anti-consumer Attorney Generals, people who are always going to side with major corporations like Koch Industries, like Exxon, like Monsanto and Dow DuPont, all of them.

Consumers lose, corporations win, and it’s because they’re the ones that have the money to spread around to buy politicians, whether it’s in the House, the Senate, the White House, and now the Federal Judiciary. They’re buying it all up, leaving us, the average American consumer, with no recourse when we’re destroyed physically, mentally, emotionally, environmentally from these disgusting corporations that think that money is the only thing that matters in this world.