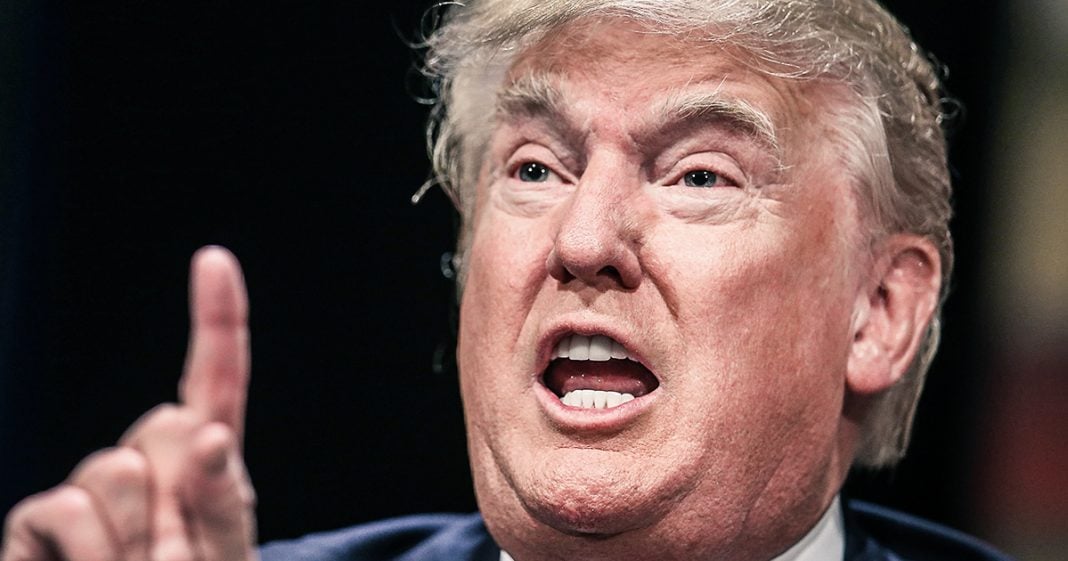 A federal judge this week dealt yet another blow to the Trump administration by denying their request to postpone and possibly even dismiss a lawsuit against Donald Trump for alleged violations of the . The case says that Trump is personally profiting off the presidency, a move that most don’t even realize is 100% illegal. Ring of Fire’s Farron Cousins discusses this.

For Donald Trump, I imagine it’s very difficult to have a good day. When you’re a human piece of crap, and you don’t ever do anything good for anyone other than yourself, yeah, it makes it really hard to have a positive news story written about you, or for anybody to look at you and say, “That’s the kind of guy I want to be when I grow up.” The news from Donald Trump, in the past week and a half, just continues to get worse. That same trend continued this week, when a federal judge ruled that the anti-corruption lawsuit against Donald Trump can proceed.

See, right now, Donald Trump is currently being sued in federal court for alleged violations of the emoluments clause, arguing that Donald Trump is still doing business with foreign governments, while president of the United States. Specifically, what’s happening is that Trump, since he did not divest from his companies, and he still gets the profits off of them, any time a foreign dignitary or foreign leader comes over to the United States and spends money at a Trump owned property, he gets that money. Yes, by definition, due to these emoluments clauses in the constitution, that is illegal. That is what he’s being sued for.

Now, his lawyers, on several different occasions have attempted to have this trial either delayed or completely thrown out. This latest one, they were trying to delay it, kick the can down the road, and the judge said, “Absolutely not. We are moving forward.” Now, as if that’s not bad enough for Donald Trump, what’s even worse is that, in the course of the discovery for this case … Excuse me. The discovery for this case is going to allow the prosecutors, the lawyers, the plaintiffs, to get their hands on the Trump organization financial documents. Documents that have been protected and out of the reach of the American public, and even the court system, for far too long.

If they get their hands on these financials, and if they’re able to show that Trump is taking money from foreign government leaders through his businesses, that will create a very real constitutional problem for Donald Trump. It will also show that he absolutely lied to us, when he said that he is going to give any profits made at Trump properties, by or at the hest of foreign dignitaries, he was going to give that money all to charity, so he didn’t have to worry about that. Yeah, records show that these organizations did give some money to charity, but they have no way of knowing if that amount equals the amount that foreign officials spent at Trump properties. That’s what they’re trying to find out. That’s what this case is all about.

I guarantee you, based on what we’ve seen from this man in the last 18 months, it’s highly unlikely that his companies actually gave away all of the money that foreign leaders spent at his properties. Maybe they did. Maybe they didn’t. The only way to find out is for this lawsuit to continue, which this federal judge says that it will. Then, once those documents come out, once the lawyers get their hands on them, they can finally see if Donald Trump is trying to do some dirty dealing, here, and continue to profit off of the presidency.