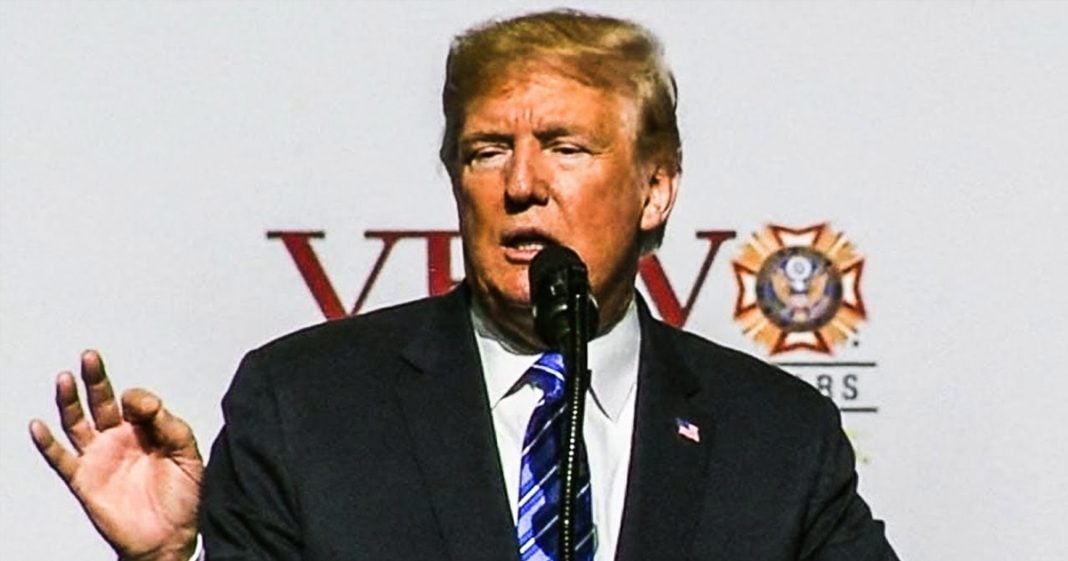 During a speech to a veterans’ group this week, Donald Trump told the crowd that they should IGNORE the reality that they are seeing around them because his tariffs are actually doing really well. He told the crowd to ignore what they see with their own eyes – never before have we heard a US president tell people to pretend that reality doesn’t exist, as Ring of Fire’s Farron Cousins explains.

Yesterday, Donald Trump had a speech for the Veterans of Foreign Wars in Kansas City and as is typical for Donald Trump’s speeches, he said some pretty stupid and inaccurate things. However, the things that he said during this speech took everything to a whole new level because essentially, what he’s asking those people in that room to do is live their lives the way that Trump lives his. Watch the clip and you’ll see what I mean.

Donald Trump: But it’s all working out. And just remember: What you’re seeing and what you’re reading is not what’s happening. And I’ll tell you, I have so many people that are so in favor because we have to make our country truly great again. Remember? “Make America Great Again.” And then, in two and a half years, it’s called, “Keep America Great.” So the way we keep America great is to make at least reasonable. I’m not saying, at least reasonable, at least fair trade deals, not stupid trade deals, like we’ve put up with for 25 years. So we’re changing it, and we’re changing it rapidly.

So what he wants these people in this room to do is to ignore what they see with their own eyes, ignore the things that you’re hearing about this country, basically ignore reality and as we all know, that’s how Donald Trump has gone through his entire presidency. I mean, the lies about his inauguration size, even though we can see the pictures, when he says that his was still bigger, that is denying reality itself and that is what he asks the people sitting in that room to do. Now, to be fair to give it a little bit more context, earlier in the speech, Trump told the people to not pay attention and don’t believe what the corporate media is showing you about the effects of his tariffs. Now, even if he was doing a callback to that and saying, “Don’t forget, don’t believe what you’re seeing on the fake news media.” He didn’t say that part. It would still be asking these people to deny reality. So far, these news programs that are covering the damage being caused by his tariffs and his trade war, that’s not fake news.

That’s all accurate and this is a bipartisan effort. We have groups like the Heritage Foundation, a very strong Trump supporting group and a right wing think tank in DC, that has talked nonstop about how damaging these tariffs are. It’s not just the progressive media or the corporate media. It’s all of the media telling us this because they can’t deny reality either. But that is what Donald Trump wants the rest of us to do and to be honest, maybe that would make us all happier. Maybe we would live in a land of sunshine and rainbows and unicorns if we weren’t confronted with the ugly reality of Republican policies every time we walk outside of our door. But unfortunately, unlike Donald Trump, we can’t turn it off. We can’t zone out. We can’t barricade ourselves into a White House or Air Force 1 or a Mar-a-Lago and ignore all the pain and suffering taking place, not just in the United States, but all over this planet.